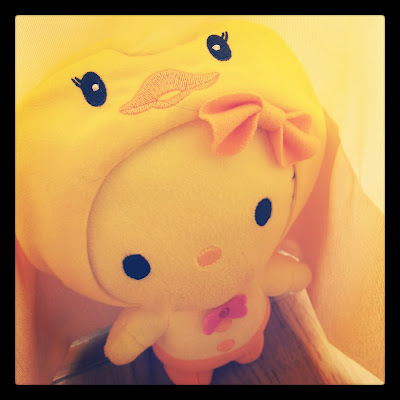 I'm not a huge fan of Hello Kitty but thought that the Hello Kitty pictures at Maccas were cute and hurriedly bought one. When I opened up the box, I went "ummmmm ..." I didn't know that Hello Kitty would be so jaundiced-yellow! I threw it to Bubs thinking that at the most, he'd play with it for a couple of days before getting bored with it.

Bubs isn't exposed to a lot of pop culture (he thinks that SpongeBob SquarePants is a block of cheese) so I asked him what he thought Hello Kitty dressed up as the Ugly Duckling was. He immediately said "Cat Duck". 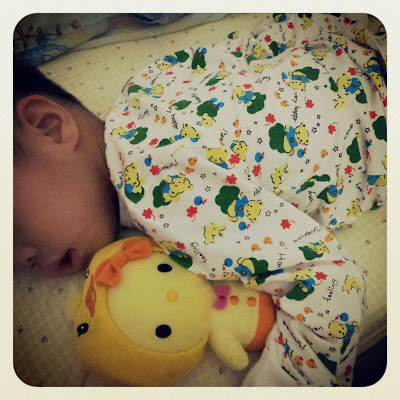 He's certainly going through this phase longer than I expected. He pretty much ignores it during the day but come bedtime, he hugs Cat Duck to sleep while Hubs throws me an accusing glance. In case you haven't guessed, Hubs thinks that most of my play ideas, masak masak, congkak are a tad too girly for Bubs.

One bedtime, we couldn't find Cat Duck and Bubs said he couldn't sleep without it. We were scouring everywhere and Bubs was calling "Cat Duck ... where are you? Meow quackkkkk."

We found it tucked under a blanket and a relieved Bubs cuddled it in his arms. 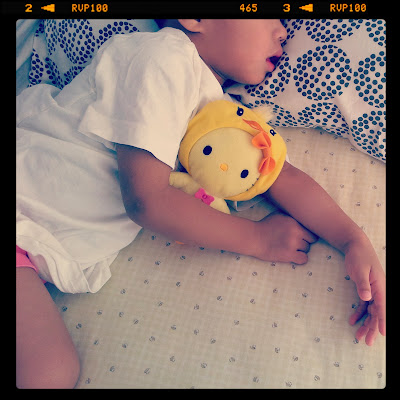 He better not be bringing that to college with him!
Posted by The Nonya at 9:14 AM