To Bee or Not to Bee


Flipping through the archives of this blog, I still can't quite believe that Bubs has grown up so much that from his random crayon scribbles - where he'd just quickly dash a few lines down just so he can rush off to play - to starting off art activity by himself. He had a minor scuffle with his friend at school and was feeling upset about it, I suggested that he make his friend a card and Bubs was really eager about it. 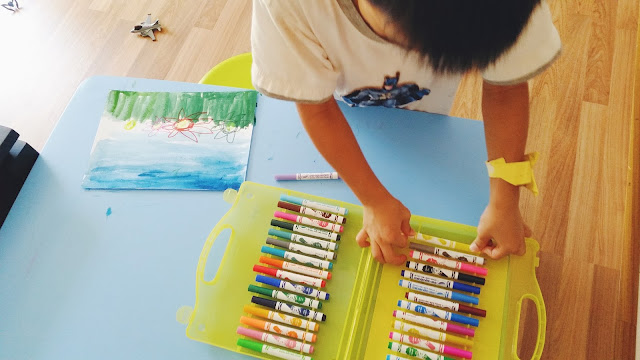 We did the background of the card with watercolours and talked about how adding more water makes the colour more diluted and lighter. I also persuaded him to try vertical brushstrokes for the patch of grass.

He got out his markers and drew in colourful flowers. "The center must be yellow, Mummy" he said as he carefully selected other colours for the petals. 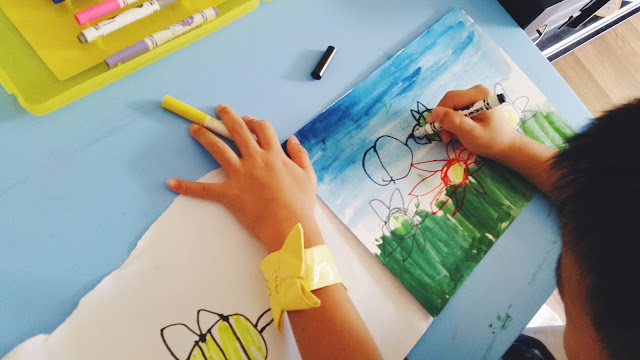 Bubs sketched a bee on scrap paper first - I was surprised he came up with the drawing all by himself - and then carefully re-drew it on the card.

For the wording, we did a few practise tries again on scrap paper. I kept reminding him to keep the letters small and close to each other for words, and then use a finger as spacing to start the next word. When Bubs was happy with his practise letters, I watched with bated breath as he started writing on the card. 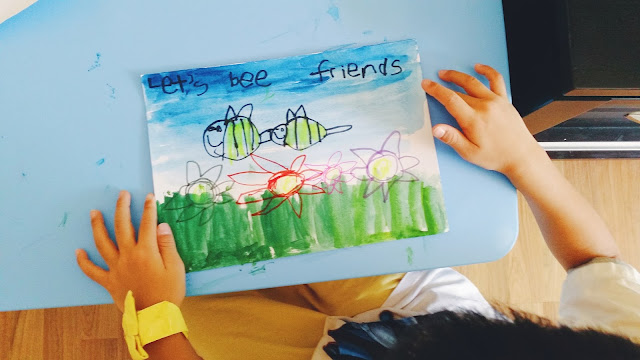 Voila! Bub's artwork :) I don't know which of us were more delighted.

Bubs: Look at my card! I did it all by myself
Me: Omigosh, my baby's work of art!
Hubs: Are you sure he wrote the letters all by himself?!
Posted by The Nonya at 9:46 AM 4 comments

I was curious over the lack of reviews for Pixyl Fountain in conjunction with Georgetown Festival 2015 so we dropped by for a while. Conceived by American artist, Steven Gutierrez, the Pixyl Fountain is an interactive art installation where visitors are invited to step on the motion-sensor floor pads for the lights and music to start up. 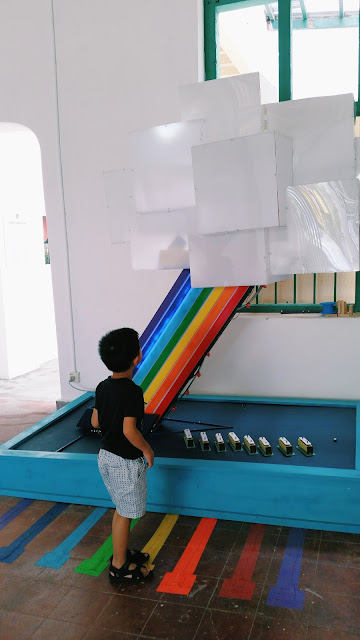 It looks like a digital cloud perched on a rainbow and by stepping on the floor pad, small metallic spheres will roll down and strike musical notes, almost like a high tech xylophone. In a nutshell, the Pixyl Fountain is supposed to represent clouds, lightning (it flashes before you hear the music), thunder and rain, almost poetic. When we were there, the motion sensors were slightly faulty so it didn't really work as designed but that didn't deter Bubs from having a ball of fun. Kudos to the very patient volunteer that explained the concept behind it and entertained Bubs for a bit. 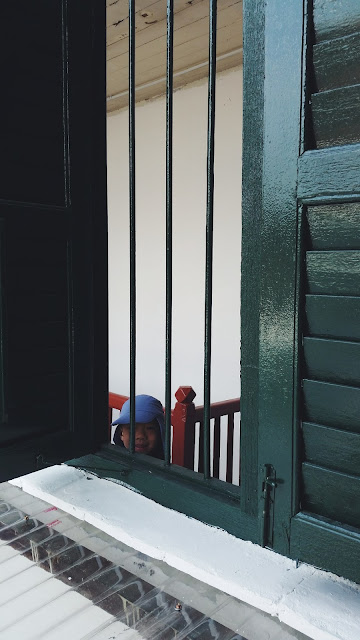 We enjoyed going around the upstairs of the pre-war house where the art installation was hosted. There was also an Obscura Festival photography exhibition and though I respect photography and art, it seemed a little ... dark ... for children so I quickly steered Bubs away. I didn't want to have to explain some of the themes behind the photos. 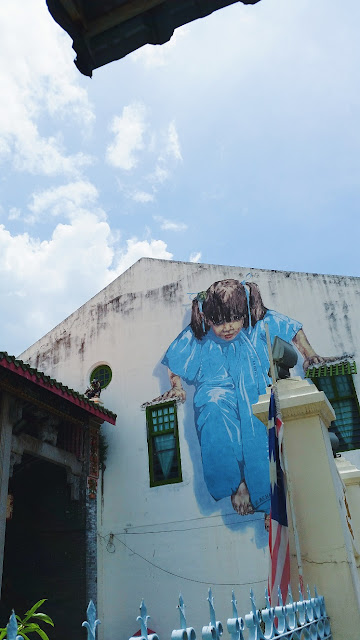 Onward to the Plates at Muntri Street. There's a huge Ernest Zacharevic street art just opposite the cafe so it makes for a nice stroll. By the way, don't be confused with the names Inch and Plates. Plates by date, Inch by night, they both operate from the same location but just at different times. Plates serves brunch - think eggs, pancakes and desserts while Inch does up Thai fusion for dinner. 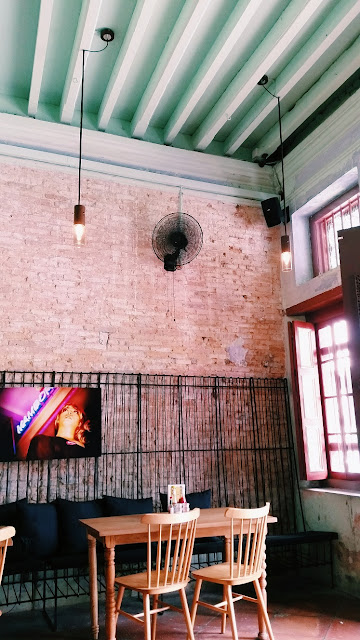 Plates is a very well styled and spacious hang out for people that want a quiet spot to chill. As with most pre-war houses in that area, it is very looooong. The front half is un-airconditioned and has a slicker vibe with exposed brick walls, minimal furnishings with a rack of new magazines. 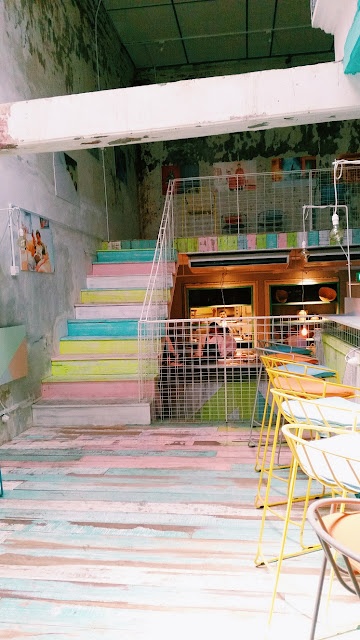 The middle portion houses a bar and right at the end is where things start getting cool, literally. There's air conditioning here and get this, everything, including the wooden stairs and floorboards are painted in pastel, Paddle Pop-ish tones. I didn't see any tables apart from a simple bar setting with rainbow hued chairs so I'm not sure if we were allowed to eat here or if it's drinks only but this place is amazing!

There was another Obscura Festival exhibition and Bubs was more than fascinated with the photos.

"Look at that man, he has GUNS, Mummy!"
"Daddy, that man has a knife sticking out of his leg! I want my photo next to him!"

Errrrr ... let's have some dessert, Bubs? 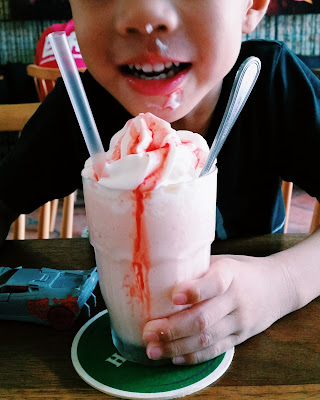 This was the peanut butter and jelly milkshake (RM14) and Bubs loved the giant dollop of cream on the top streaked with strawberry syrup (or was that the jelly?) I found it very refreshing on a hot and humid afternoon though Hubs did say it was a whole lot sweeter than he expected it to be. 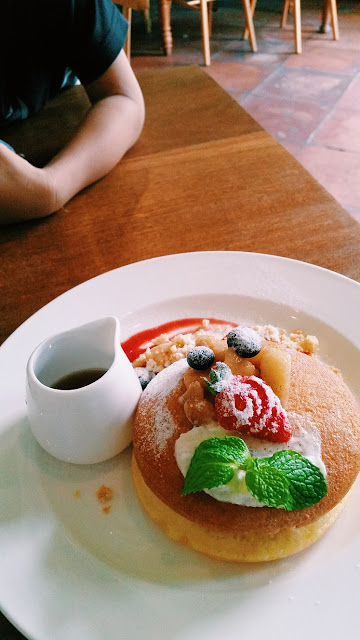 The pancakes (RM16) with apples and raisins compote were served with fresh blueberries, strawberries and a serving of mascarpone. The pancakes were soft, fluffy and almost cake-like and came with a tiny jug of maple syrup which I'd to keep away from both Hubs and Bubs.

I did wish that the wifi password was more accessible (you've to ask for it from the wait staff) and that water was readily served to all but apart from the slightly pricey food, it's a nice area to hang out.

Email ThisBlogThis!Share to TwitterShare to FacebookShare to Pinterest
Labels: dessert 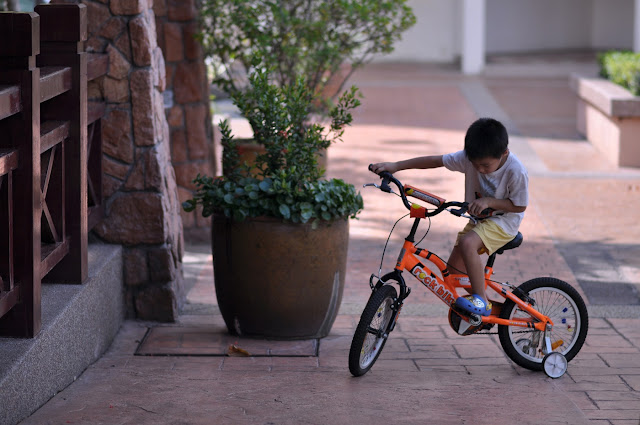 Bubs went out of his mind when Siew loaned us the coolest bicycle ever complete with training wheels. His eyes shone and he had the widest grin on his face.

There was only the slightest problem: Bub's legs can't quite reach the bottom of the bicycle and his tiny hands aren't wide enough to fully squeeze the brakes on the handlebars. In a nutshell, he can pedal but he can't stop!

He refused to let this little setback deter him from the ride of his life. He figured by himself that if he were to stop pedaling and just let it glide, sloooooowly ... it would just come to a halt ... and hopefully before he hits a brick wall ;)

He's been pestering us to follow him out on bike rides, even going around the area in circles repeatedly made him so happy. He's so confident about it that we're even thinking of removing the training wheels soon. Another awwww, can't believe my baby's growing up so fast moment.
Posted by The Nonya at 11:19 PM 2 comments

We dropped by Starbucks's newly opened outlet at Batu Feringghi. Located right next to the beach, it offers both indoor and outdoor seating. The outdoor seating will leave you spoiled for choices ranging from deck chairs on a tiny sandy area to an elevated seating area that offers gorgeous views of the ocean.

A mistake we made was to head there right after lunch and it was scorching hot. We stayed put at the indoor area - thank goodness for air conditioning - for a while, armed with toys for Bubs and enjoyed the free wifi. Bubs kept wanting to go out to explore outside so we choose an overcast moment where the sun was covered by clouds to take a quick look outside. 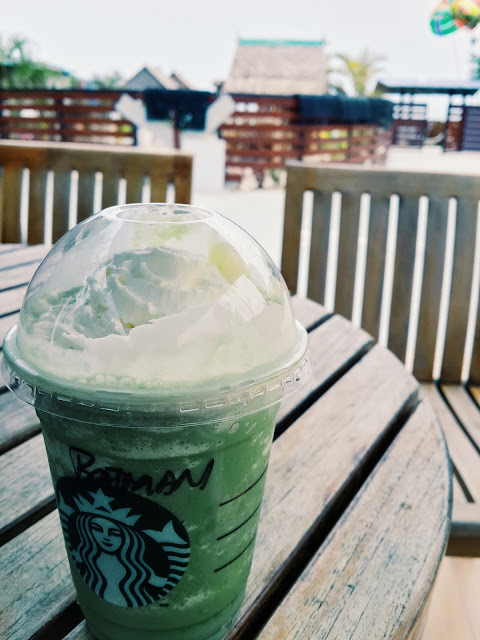 Bubs and my favourite drink :) The fun part is choosing random superhero names for the cups. 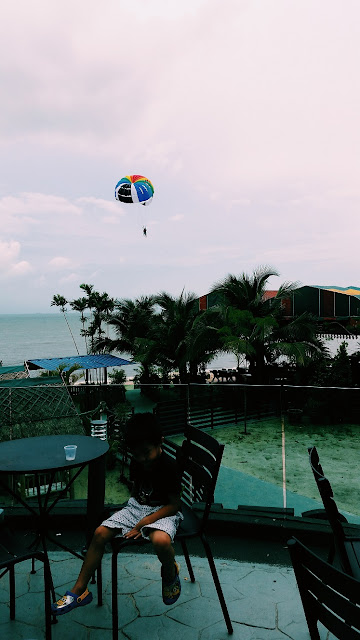 "Mummy, look! Parachutes look just like colourful umbrellas!" We were lucky that no one was smoking outside so we hung around here for a while. 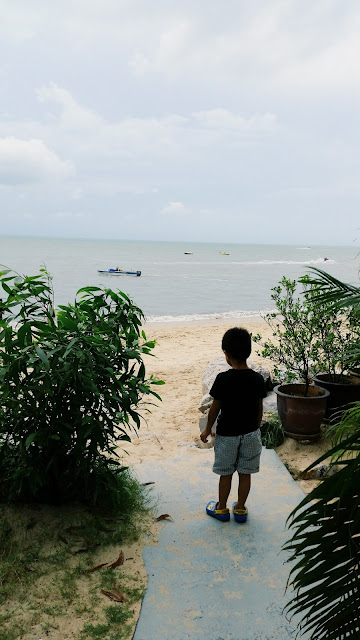 There's a small path that connects Starbucks to the beach.We ran around for a while, relishing the feel of the gritty sand that made their way into our shoes and inhaling the fresh, salty tang of the ocean air. I could have kicked myself for not bringing along some beach toys :(

It's a beautiful place and one that I have bookmarked to bring friends to for a nice place to chill but a reminder: never ever go right in the middle of the afternoon unless you want a killer tan. Starbucks Batu Feringghi is right next to the Parkroyal Hotel and provides free parking for customers.
Posted by The Nonya at 9:08 PM 0 comments

The Weekend in Snaps


It's been a really quiet but meaningful weekend spent with family. 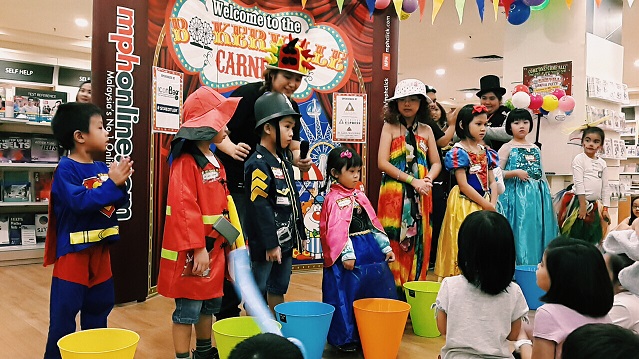 Hubs and I spent close to half a day at the MPH bookstore's Bookerville Carnival where popcorn and candy floss galore were served in unlimited quantities to participants. It was supposed to be a fancy dress but as most children came in casual clothes, Superbubs got a prize just for dressing up :D 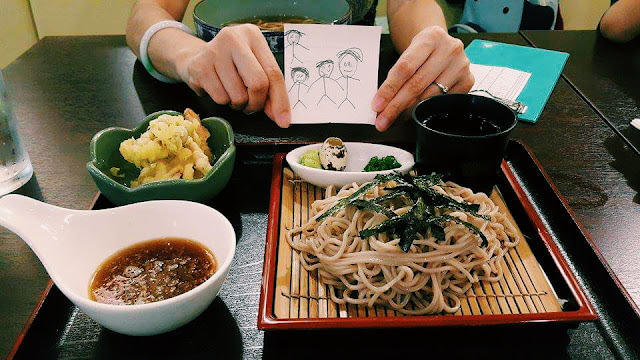 Lunch at Wakaba with my Dad and Baby Brother. The cold soba noodles were perfection because the noodles are freshly made in house and made even better with this sketch Bubs drew of the 4 of us. In case you can't tell, I'm the midget on top ... only because I insisted to be in the picture and there wasn't room at the sides to add me in. 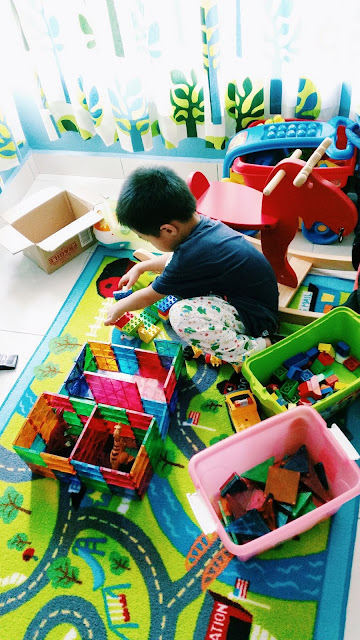 Bubs building dinosaur enclosures. He's been a tad obsessed with dinosaurs after watching Jurrasic World. I swear, when I jerked at some parts of the movie, he didn't even bat an eyelid.

Hubs: You need a roof for the cages.
Bubs *very crossly*: Nooo, they don't need a roof so that when it rains, they can come out & eat humans

It has been a mentally and physically draining week: my inbox has been crammed full with issues and I'm still recovering from a nasty cold. It's gotten to the point where I wake up 7.30am even on weekends, my mind already frantic with the list of tasks and I'm unable to get it to shut down for a while.

It was good to just recharge over the weekend and to remind myself to breathe. 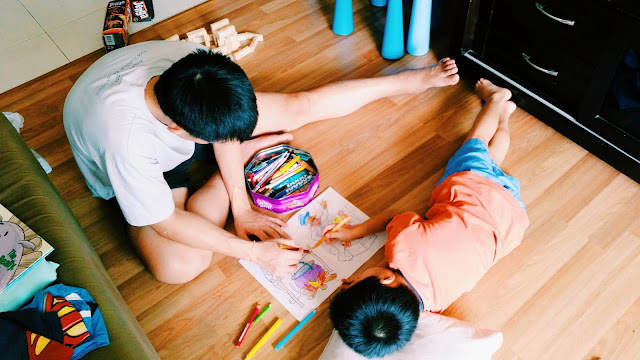 Bubs has been on a colouring kick again and he enjoys it even more when we sit down and join him. Don't knock it til you try it, colouring for adults is gaining popularity now ;) If you are interested to take it up, Faber Castells are surprisingly really good, these beat the Colleen colour pencils that were hugely popular back in the 80s. 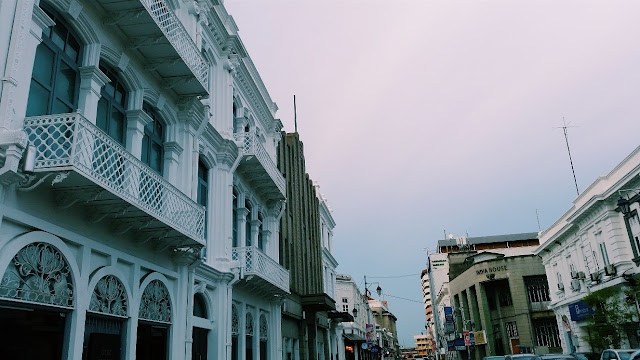 Beach Street on a quiet Sunday evening without the hustle and bustle of heavy traffic is one of my favourite streets in Penang. Whenever I stroll down there, I get the feeling that the ornate, majestic buildings have witnessed so much and I hope that even after we're long gone, they will still be there, silent but still awe inspiring. 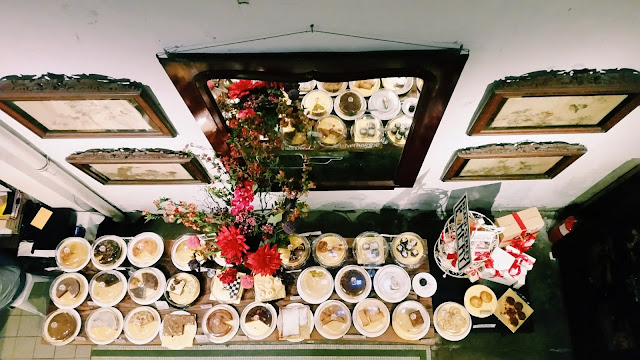 China House is chock a block full of delicious desserts and beautiful, quiet corners alike. Bubs was in love with this place because of the giant roll of paper and crayons provided. I just wished that the smoking section was decently sectioned away from the non smoking side as we could still smell ciggies at our area.

Here's to a better week ahead!
Posted by The Nonya at 7:39 PM 2 comments