Reads: Bubs and Mine

Bubs and I are lucky to have friends and relatives that have a knack of picking just the right books for us. These are our current favourites: 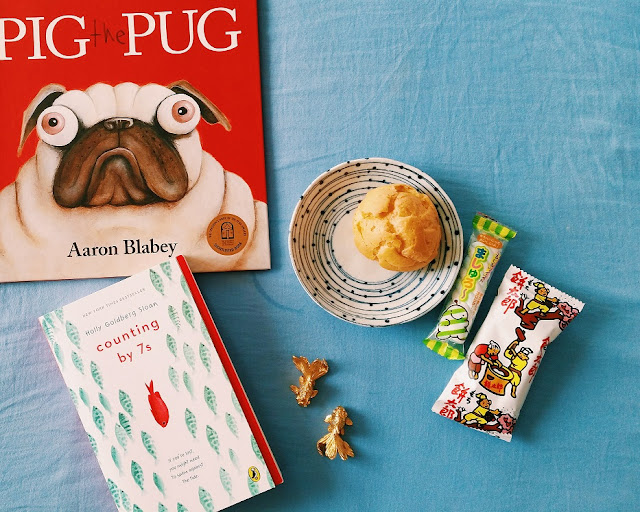 I'm currently on a Young Adult fiction kick and reading them has sort of reminded me what it's like to be back in school, uncertain of the world and to swim against the tide. Counting by 7s was a birthday pressie from KL Godma and it had me in laughter and tears every few pages. Twelve year old Willow Chase's adoptive parents are killed in a road accident and she has to cope with her new life with a bunch of eccentric but lovable characters along the way. 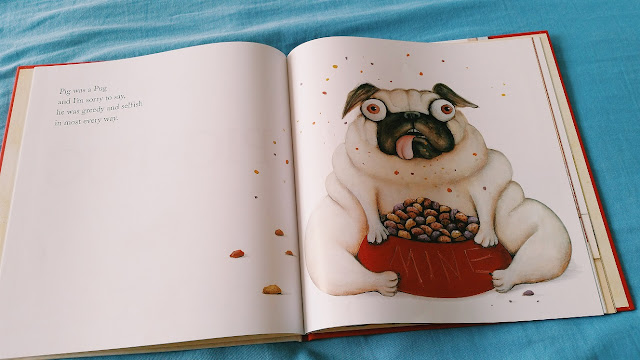 My cousin, Jean, has a fantastic artist's eye and is fabulous at picking out stuff that I love. Bubs is chuffed that he's able to read Pig the Pug all by himself and he laughed out loud at the story. I secretly think that the bug-eyed pug looks (and acts) deranged, in an endearing way.
Posted by The Nonya at 10:34 PM 0 comments

Email ThisBlogThis!Share to TwitterShare to FacebookShare to Pinterest
Labels: books

It was one of those humid days where schedules are thankfully empty and all you can be bothered to do is hang out with some pals. 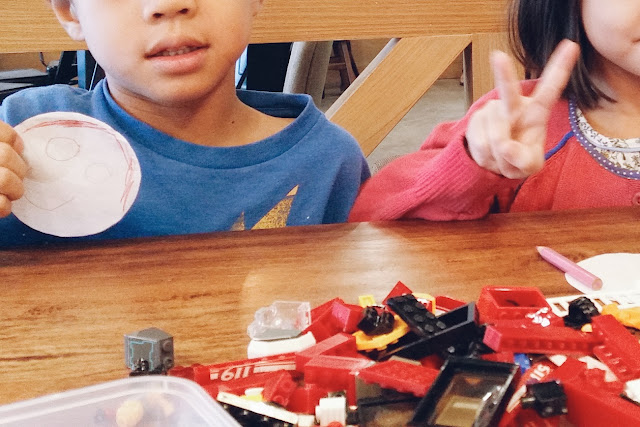 We met up with Bub's cousin, Olivia, for lunch. The two of them bonded over a mutual love for Lego and played happily for hours, eating, talking and building. 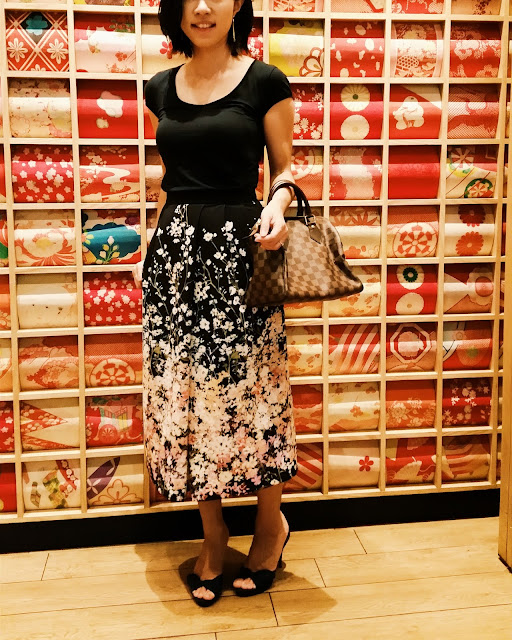 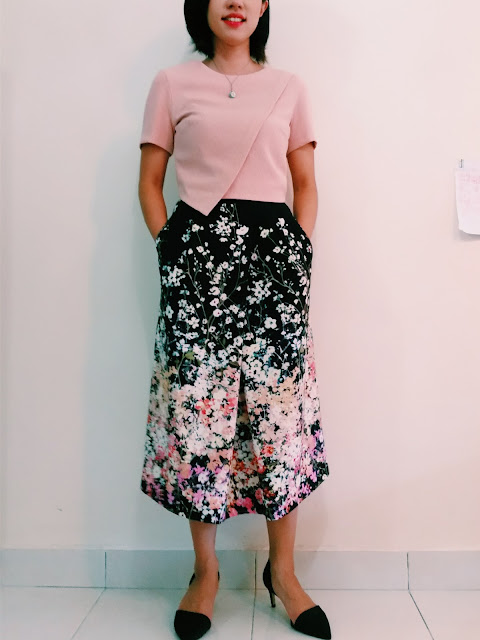 My cousin, Jean, got me this gorgeous floral print midi skirt from Zara and it's one of the most flattering plus comfy skirts ever. It's high waisted so it sucks in annoying tummy fat (yes, I know, less food, more exercise ;) ) but it's not as tight as a pencil skirt, it's incredibly comfortable. It looks sleek and polished with a black, fitted tee and cute when paired with a blush coloured top. 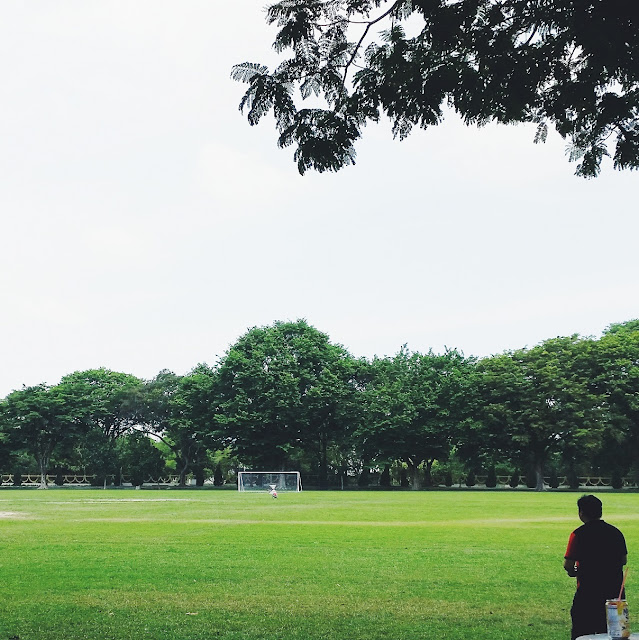 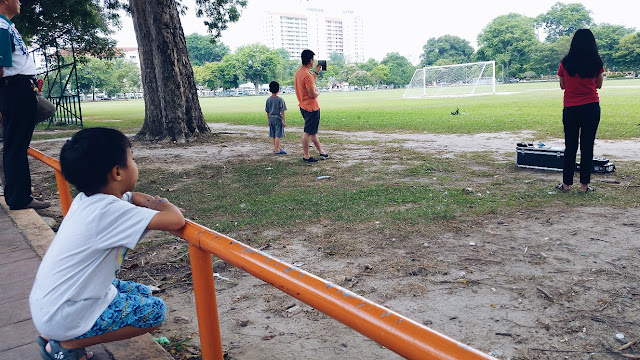 Another thing to cross off Bub's to-do list as a kid: watching hobbyists with their remote controlled helicopters. My Dad told me stories of how when he was a kid, he'd go to that very same field to fly his toy plane so I was eager for Bubs and I to just hang out there for a while. The hobbyists were a very friendly and enthusiastic bunch, chatting to us about the various models. If you're keen to drop by, they are usually there 11.30am on weekends.

Bubs followed me for a quick stroll at the Waterfalls plants nursery. It's a massive space occupied by a few separate businesses with reasonably priced pots, lush greenery (not that many cacti or air plants though) and there was a pottery class in session, complete with a kiln. 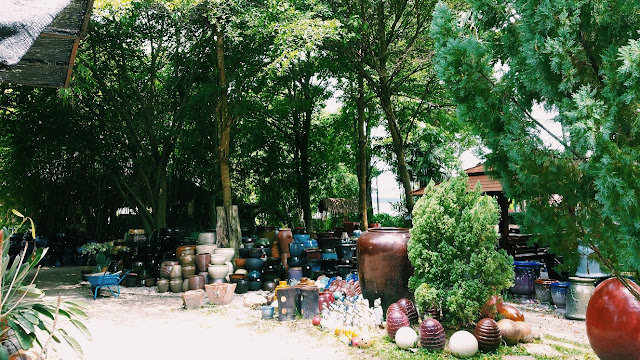 Pots of all sizes, shapes and colours scattered across the grounds. 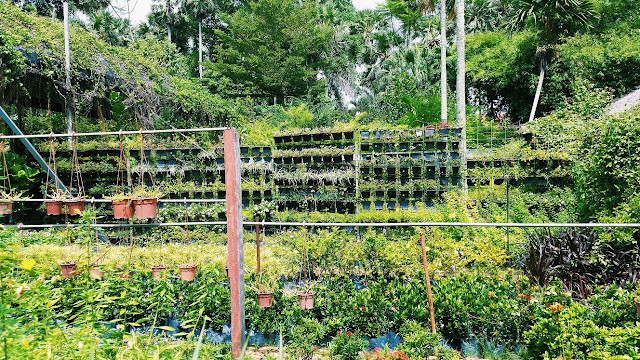 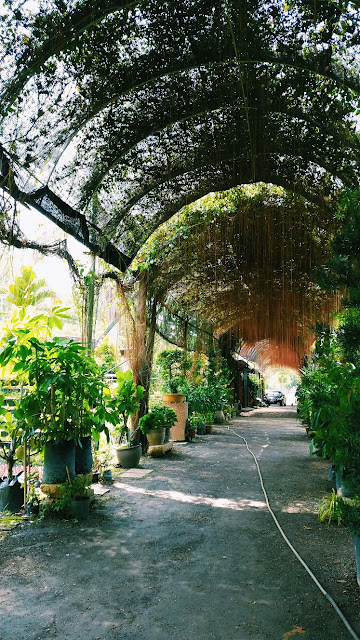 I know, it's the auntie in me that is starting to appreciate all the gorgeous greenery.
Posted by The Nonya at 10:30 AM 0 comments 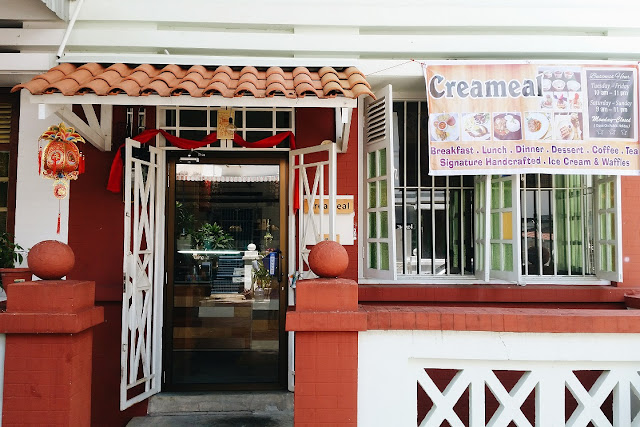 Creameal, a tiny cafe tucked in a quiet lane dotted with charming houses, makes the best handcrafted waffles and their artisanal ice creams are amazing to the point that we've made quite a few visits back. 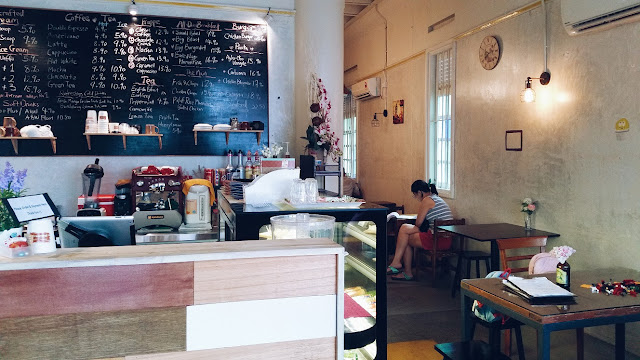 The cafe is slightly on the spartan side but has a quirky feel with its unusual wooden tables and chairs. Some of the tables were re-purposed from old, wooden doors and a few of the chairs looked as though they belonged in primary schools classrooms :)

The ice creams are very Malaysian in nature, think along the lines of Bandung, Green Tea Jasmine, Gula Melaka with sea salt (sadly sold out when we were there), Milo Peng, Coconut Lychee and more. You can choose up to 3 scoops with each waffle order for RM15.90 (add on RM1 for premium flavours, like the Earl Gray Lavender) 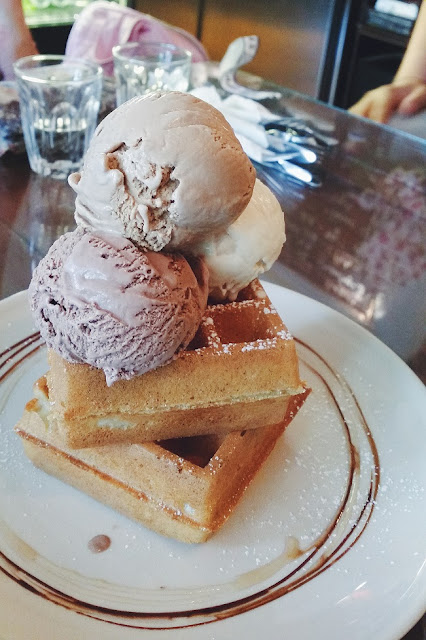 I was pleasantly surprised that there were 2 pieces of waffles that came nicely decorated with a drizzle of chocolate syrup and dusting of icing sugar. A tiny jug of maple syrup is available upon request. The waffle batter is slightly sweet so they can be eaten on its own without any ice cream though it would be a shame.

This was the Milo Peng, Earl Gray Lavender and Coconut Lychee. The Milo Peng was nice by itself, but wasn't a standout for me - it tasted exactly like the Milo ice creams available at supermarkets. I didn't like the Coconut Lychee as the santan taste was too strong but Hubs thought it was stellar and licked up every bit of this. We agreed that Earl Gray Lavender had a nice, strong taste that went perfectly with the crispy waffles. 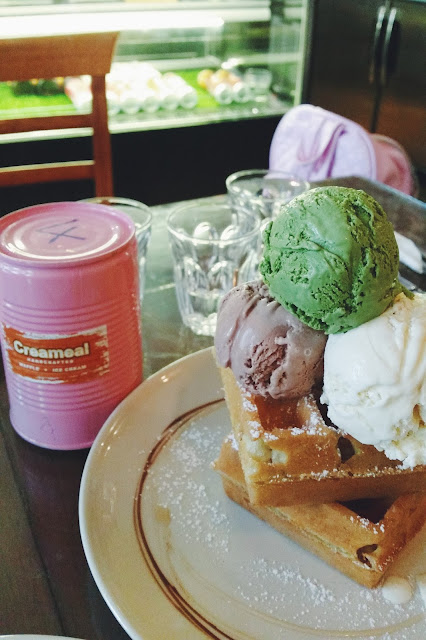 Our friends had the same flavours as ours but they swapped out the Earl Gray Lavender for Grean Tea Jasmine and after sampling a tiny bite, I immediately wished that I ordered that instead. The slightly smoky taste of the green tea was balanced with the sweet, floral tones of jasmine, it was definitely some more-ish.

Bubs and I went back the next day and tried Bandung with the rest of the flavours. I thought it tasted a little too artificial but Bubs, who has a sweet tooth, adored it.

Parking is challenging as it's a small lane but you can park further ahead at the main road.

Email ThisBlogThis!Share to TwitterShare to FacebookShare to Pinterest
Labels: dessert

The best weekends, are often the most uneventful ones, time spent with family and friends, good food and just pottering around. 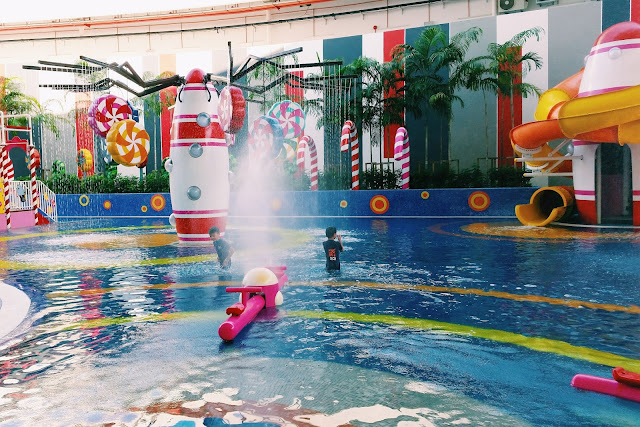 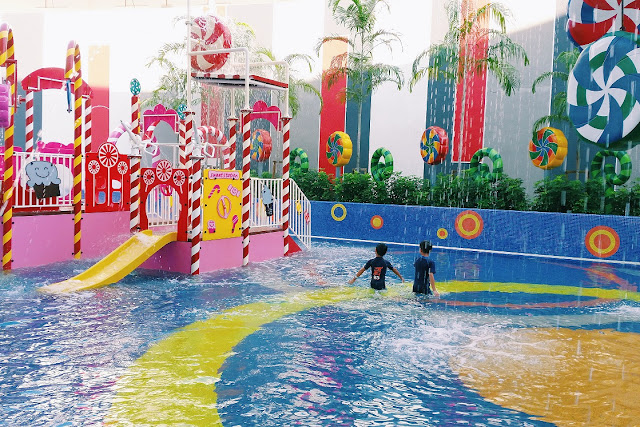 Bubs met up with the 2 Nats at the Spice Arena public pool. Stoked that we were the first customers of the day, we had the entire children's pool to ourselves for a good part of the morning. They frolicked in the chilly water for hours, chasing and splashing each other. 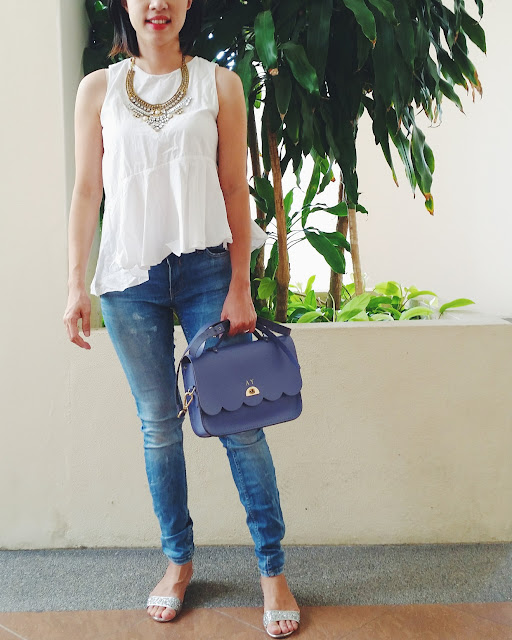 Weekend uniforms are mainly a white top and skinny jeans with a statement necklace added for some bling. Hubs calls this my Cleopatra necklace. 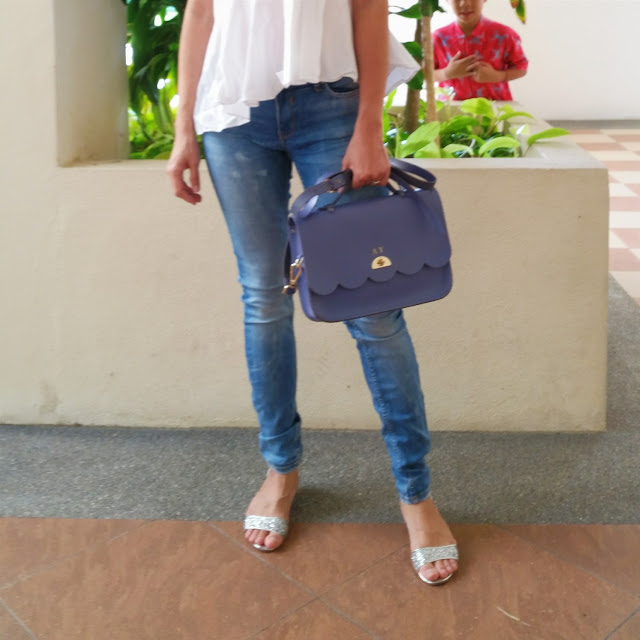 With Bubs photobombing in the back :) Since it's a somewhat shaky close up, let me tell you how much I love my Cambridge Satchel cloud bag. It's a structured, stiff leather but fits in all my stuff and the twist lock is a much welcomed change from its previous leather buckles. 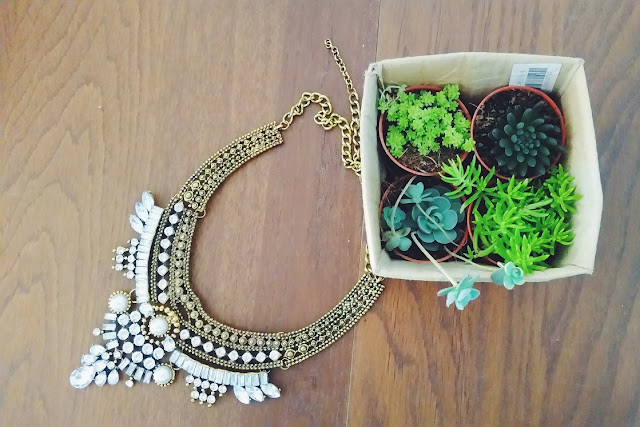 I went succulent shopping again! The nursery at Green Lane (past the Caltex station) has a wide range of small succulents, from prickly ones that I eschewed to pretty leafy stems. The friendly owners are full of handy tips for looking after plants - an alternative to watering the succulents is to just soak the pot in a shallow tray of water for the roots to suck in moisture. 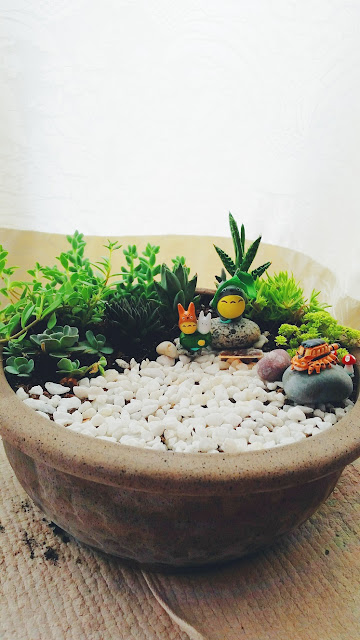 Here's to hoping that this can last more than a few weeks. I got this unglazed, wide pot from the pottery shop close to the Waterfall Gardens for just RM13. 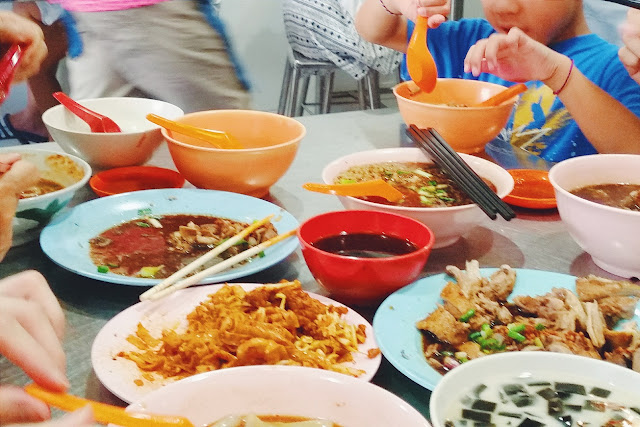 The Kimberly Street duck noodle stall has been operating for decades. When I was Bub's age, my parents used to take us there for dinner and it seems fitting that now, Hubs and I brought Bubs along with my parents and brother there. We ordered up a storm and Hubs is still in awe of how much food we managed to polish off.
Posted by The Nonya at 4:58 PM 0 comments