Wake me up when September Ends

September has been the best month of the year so far and I'm grumpy now because it's ending all too fast :( There were 3 public holidays plus Hubs and I took some additional days off work to stretch the weekends even longer for Bub's 5th birthday and his school's lantern festival.

The Big Bad Wolf book sale is back again in Penang for the 2nd time this year, woo hoo! On the very first day, my friends and I went sans kids just so we could focus on books without having to worry about losing little ones in the crowd. It always gets crazy during the first day and if you're not fast enough, you could get stuck queuing up for hours just to make payment. 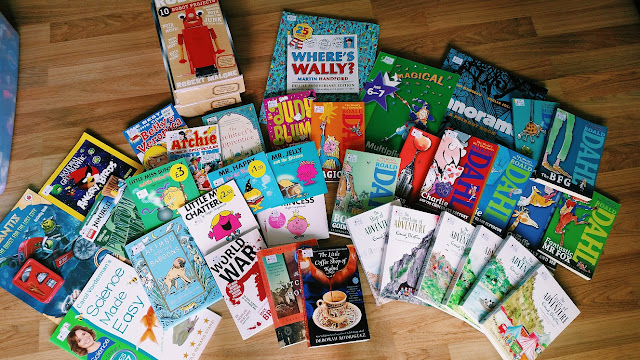 This was my haul on the first day *sheepish grin* In my defense, the Roald Dahl books were absolute bargains at RM10 and RM8 each. I can't quite be sure but I think it might be even cheaper than the box set at Book Excess that Fairy Godma and I had been eyeing for quite a while. I'm just missing copies of the Witches and Matilda. A friend's niece pointed out these Enid Blyton Adventure Series and I can't believe that I'd not read them before as a child so I was very excited about getting these, also RM10 each. The Archie comics were also good steals; Bubs still can't believe that they have been around since Grandpa was young and we all grew up reading them. 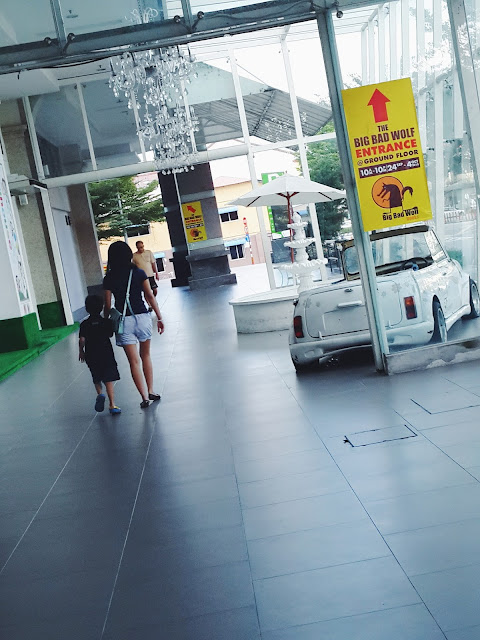 Bubs was upset that he didn't get to go so again, during the very next day *shopaholic alert*, Hubs and I brought him there. 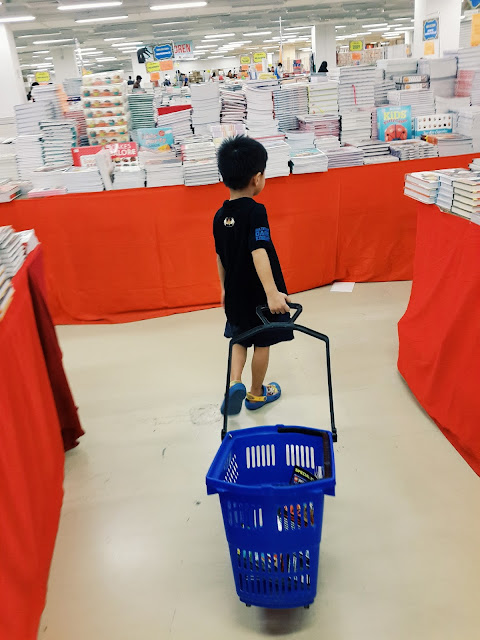 He was so enamoured with the trolley that he tugged behind him and even begged Hubs to let him sit inside it like a wagon, LOL. Again our misgivings, we bought him the Mummies fact book that Bubs begged for. When he asked me to read it out aloud, there were SO many gruesome bits (ritual human sacrifices, detailed organ removals, etc) that I'd to censor. If that book didn't give him nightmares, it sure as heck gave ME nightmares *shudders* 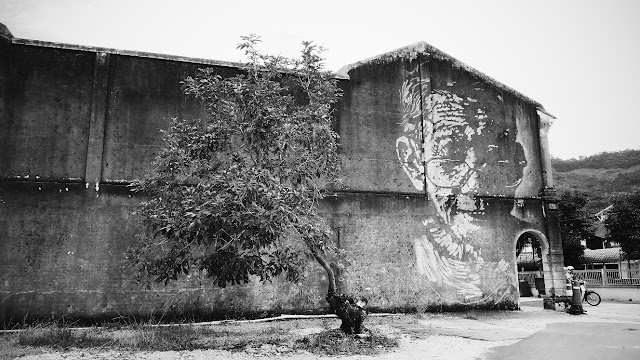 We took a trip to Balik Pulau for the best laksa ever and spotted this intriguing street art. We may not have Banksy but we're not lacking in talented street artists here. 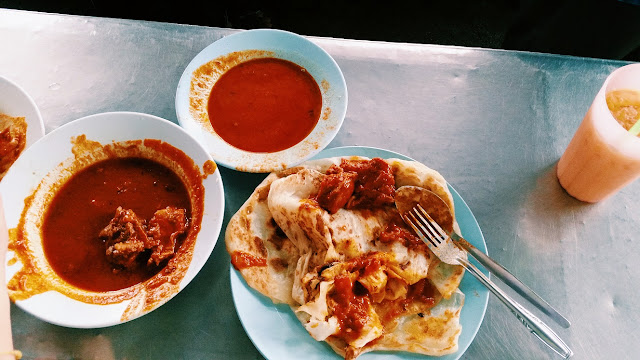 The roti canai stall at Transfer Road is somewhat of an institution in Penang. I had my first taste more than a decade ago with a bunch of college friends and since then, everyone that I've brought there has been hooked on it. It's a bit of dicing with danger; makeshift tablets are set up right next to the roadside - eating with buses roaring past you makes you appreciate life more - and you tend to close an eye towards the hygiene levels. All of these just melt away when you take a bite of that incredibly crispy, maybe a bit charred, roti dipped into a dish of spicy kuah daging. Perfection has never tasted better ... 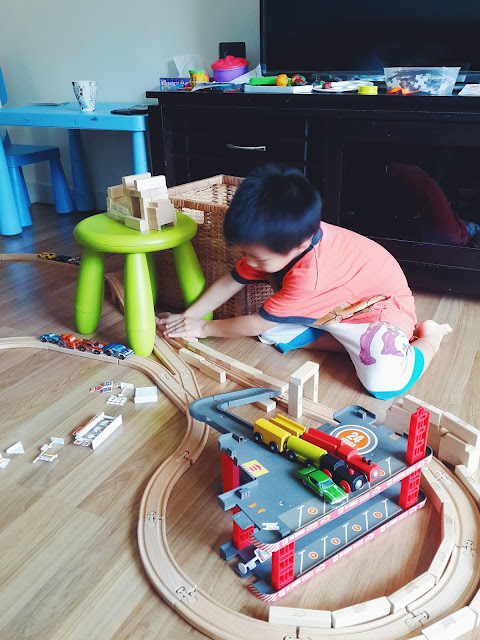 Watching Bubs getting more creative with his play. He combined different sets from a garage, Ikea wooden trains and Jenga to form a massive traffic jam, of all things!
Posted by The Nonya at 4:17 PM 0 comments


Bub's school celebrated its lantern festival over the weekend and it was so much fun for everyone. Thankfully, most of the awful haze had cleared up because the festival was held in the garden though as usual, everyone applied copious amounts of mossie repellent.  When it started to drizzle, one of the teachers led the children to sing "rain, rain go away" and believe it or not, it actually stopped! The power of visualisation? ;)

The children sang and danced and it was so cute to see all of the little ones performing together. I stifled a giggle when I saw Bubs and his best friend being separated from each other because they were chattering together too much to focus on their performance. 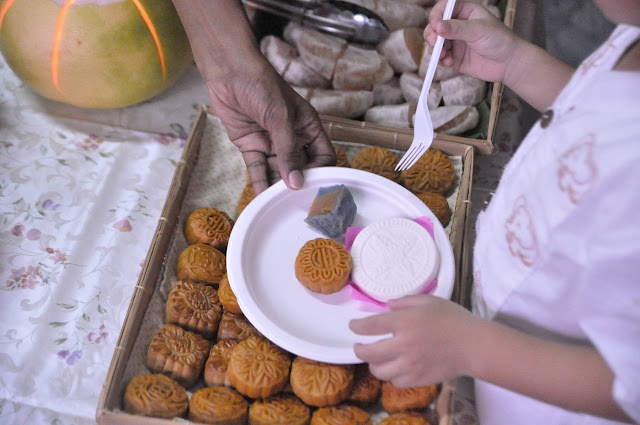 Traditional snacks were served and there was so much thought and effort put into them. The children made the mooncakes, the baked ones had pineapple filling which were yummy and the blue dye for the snowskin variety were from the blue pea flowers that grow in their garden. There was a tray of pomelo and the hollowed out skin was used as a candle holder - pretty and functional! I'd never seen the white, powdery soft round cakes before and they were intensely sweet. 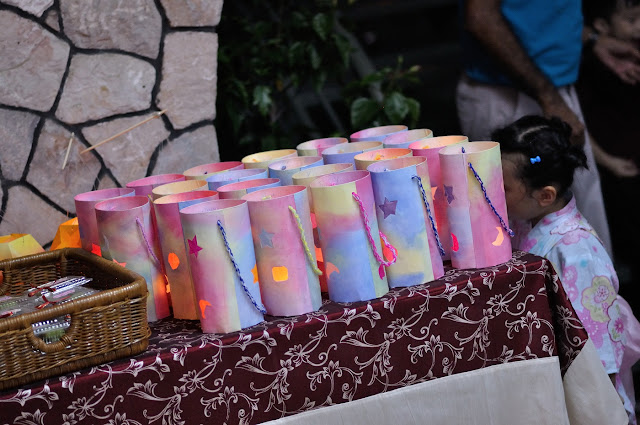 All of the lanterns were lit up and each child found the one that they made earlier in the week. Bubs was so proud of his and explained that they drew the shapes on with a template and the teachers help them to cut it out. 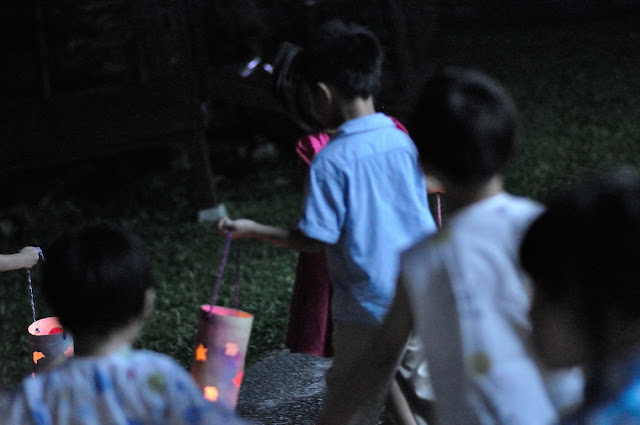 We all went on a walk around the neighbourhood with the light of the lanterns guiding our path through the darkness, accompanied by the sounds of the children singing happily. It was such a beautiful sight and they definitely had so much fun that no one wanted to go back early.
Posted by The Nonya at 12:23 PM 0 comments


Bubs was half excited and half confused about his 5th birthday last week.

"But I'm already a 5 year old at school! Teacher said so!"

We'd a few mini celebrations this year instead of a big bash this year. Bubs was thrilled with all the attention plus cakes, yes, as in plural, that he enjoyed. 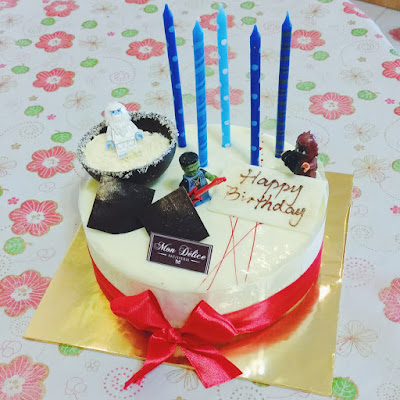 Hubs managed to get his hands on the Halloween Lego minifigs he found at Toys r Us and they made cool cake toppers. For lunch with the in laws, Bubs had a coconut and gula Melaka cake from Mon Delice. This was a really interesting cake with top layers of creamy coconut, a middle layer of fragrant gula Melaka and bottom bits of crushed, somewhat crunchy biscuits. It was immensely filling and a small slice was enough to fill everyone up, including Bubs who is insatiable when it comes to desserts. 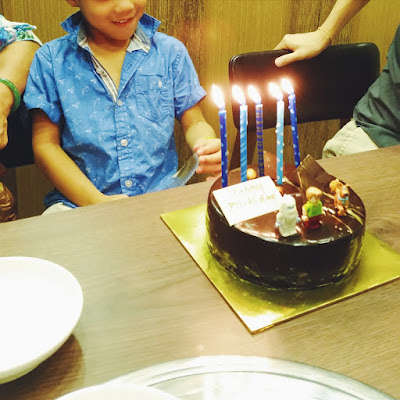 Dinner was with my family and I shamelessly recycled the candles from the earlier cake :D This time around, we'd popped on Scooby Doo Lego minifigs on top of a decadently rich chocolate cake also from Mon Delice. Even my Dad who doesn't really fancy chocolate proclaimed it good and requested for another helping. Before anyone could stop him, Bubs sunk his teeth into the white chocolate Happy Birthday sign for the 2nd time that day, someone was definitely on a sugar rush ... 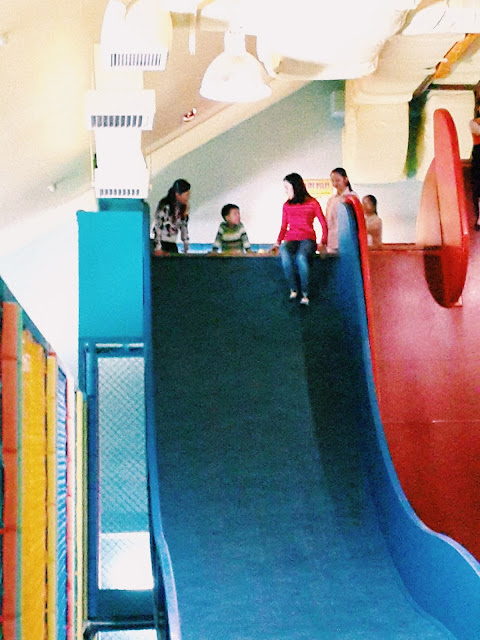 We'd a play date at Golden Sands' Adventure Zone with Jaz. This is the super freaky and did I mention, steep slide that you need to take a slight up stairs up to. Bubs loved it and so did a bunch of other kids there so much that I decided I'd to go see what the fuss was about. I peered down at the edge and it literally took my breath away. Bubs, Siew and the staff convinced me to give it a go and let's just say, being graceful is not one of my strengths. My squeals of terror drowned out the music and Hubs is gleefully keeping the video of me sliding like "like a corpse" (his exact words)

Hubs and I were invited to celebrate Bub's birthday at his school and we didn't really know what to expect. Bubs told us the night before that we'd have to help bake his cake and that he'd requested the teacher for "an orange cake, not chocolate, because I like orange better."

It was such a beautiful experience and I felt truly grateful that we were given a sneak peek into a day at his school. A few children were selected (apparently they take turns to be the "baker") to help bake Bub's cake. 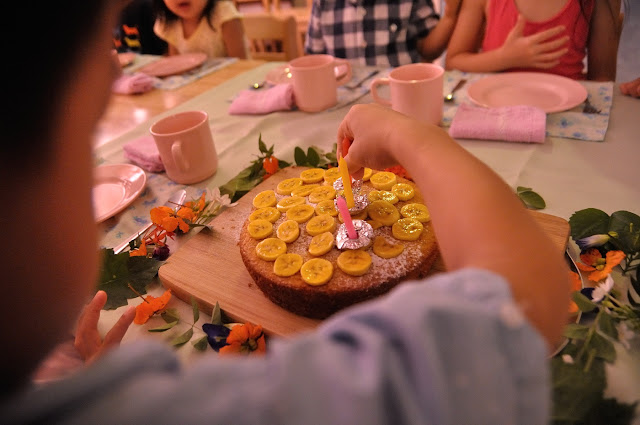 We sifted the flour, cracked eggs and took turns mixing the batter. Since it was raining, the teacher gathered flowers from the garden (usually the children would pick them). The children then set the tables and placed the colourful blooms around the cake serving tray. Bubs decorated his cake with banana slices and dusted icing sugar over it. The cake was sooo good, fresh out of the oven, all warm and buttery. 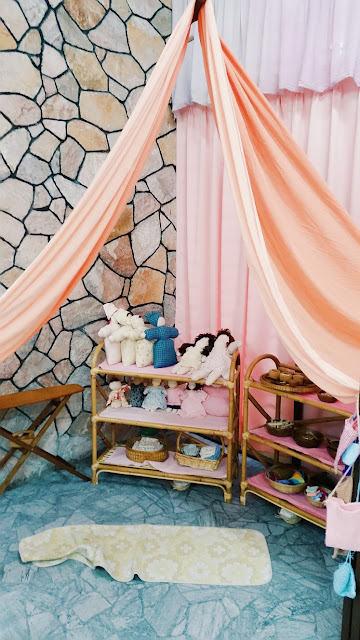 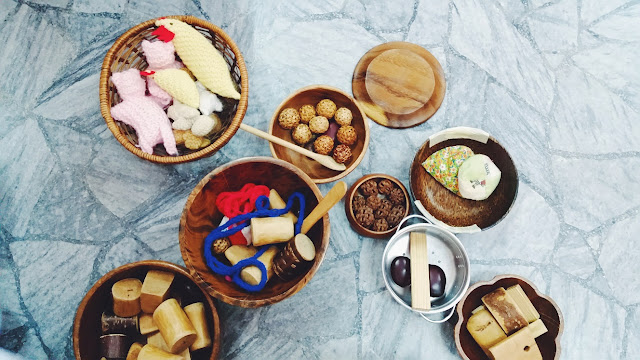 Hubs and I were invited to watch the children at play. I was so fascinated with their toys that I couldn't stop taking photos. They had pine cones, seashells and rubber seeds in wooden bowls that looked so inviting. There were even cut sections of tree branches that were carefully sanded. 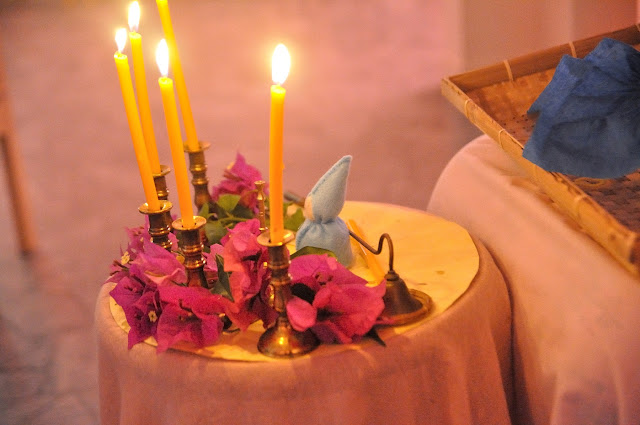 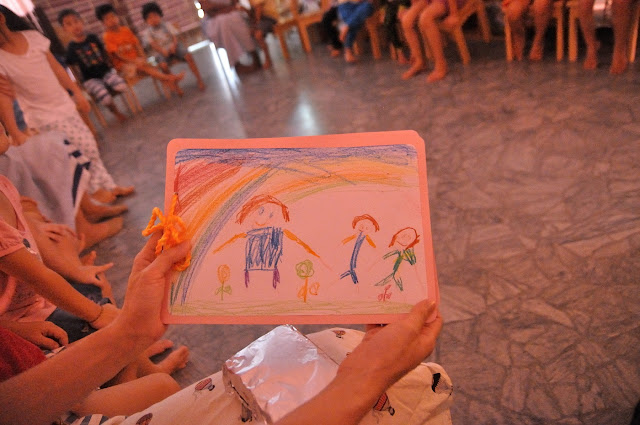 The teacher then delighted Bubs by giving him a hand crafted felt gnome as well as paintings from all of the children bound into a book, featuring Bub's drawing on the cover.

Happy Birthday, Bubs, may you always be surrounded by love and laughter and never know a day without happiness. I know that you're in a rush to grow up and embark on your journey to life but deep within my proud mama's heart, you'll always be my little boy with joyful eyes, windswept hair and laughter of a thousand bubbles.
Posted by The Nonya at 11:13 PM 0 comments