Ever since Bubs started primary school, weekdays have been a blurry rush of beating peak time traffic, unpacking and repacking his school bag, cramming in some revision all while trying to cook dinner and do the laundry at the same time. Whew! I get tired even thinking of it. Bub's weakest subject is Bahasa Melayu so I usually scan his school books to have an idea of what the teacher has covered, jot down a quick vocab list to practise with him and also get him to do a page or two from workbooks. Sometimes Bubs will read a Malay picture book with Hubs and again, I quiz him on vocabulary. #TigerMum, hear me roar. 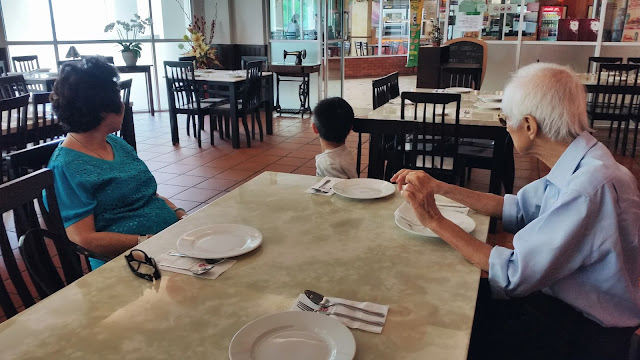 So apart from school stuff, this is what we have been up to. I've said it again and again, Bubs is incredibly lucky to have grandparents that adore him and think that he can do no wrong. During the last school holidays, both sets of grandparents were squabbling over who got to look after him. 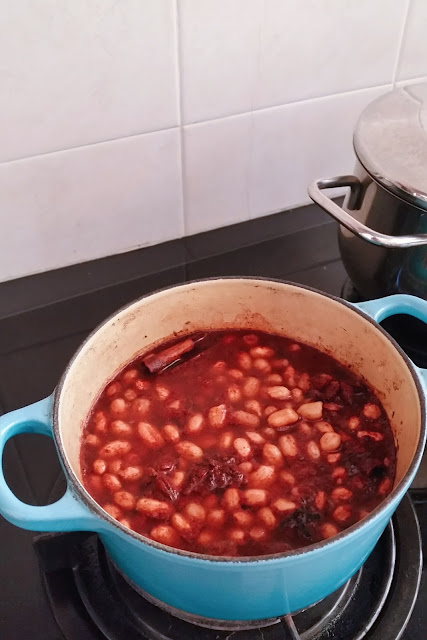 Meal planning has been such a time saver and sometimes on weekends, I pre-cook for the week ahead and store them in the freezer. This simple braised peanut dish is a favourite of mine as it makes for a tasty side dish to rice porridge. All you need, apart from the time required to slowly braising them, are peanuts (soaked for a few hours to soften them), star anise, cloves, cinnamon pieces, 5 spice powder, soy sauce, dash of oyster sauce and sugar to taste. 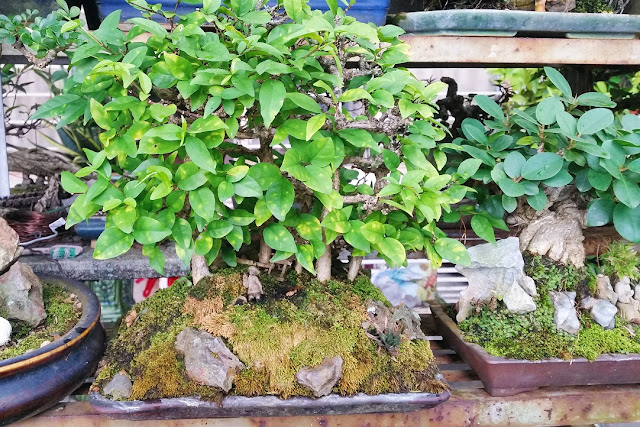 Taking some time out to smell the roses admire bonsais. My dad's friend has this amazing bonsai collection and each time I visit him, I am just in awe at how artistic he is in arranging the layout and the infinite care and patience he has in babying them. Look at how he packed soil and rocks on a very shallow tray and getting them to form a craggy mount for the bonsai to grow on. 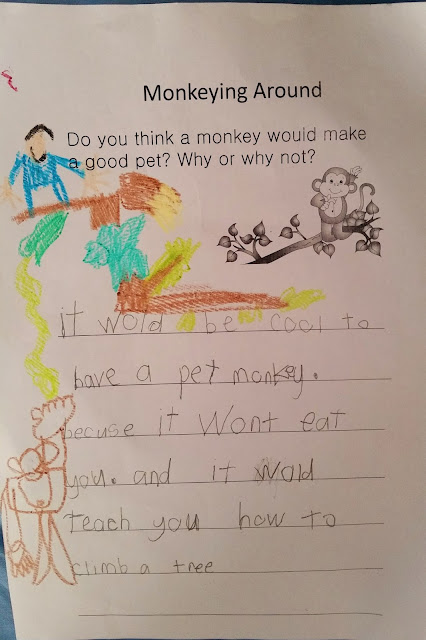 Bubs has been trying his hand at short creative writing and at times, I don't know whether to laugh or cry at his attempts. In typical Bubs style, he rushes through his work to get it over with. For his imaginary pet monkey, he initially stopped after "it won't eat you", saw me arching an eyebrow at him and tapping at the paper, before wisely deciding to expand it just a bit more. Bubs, oh, Bubs ... 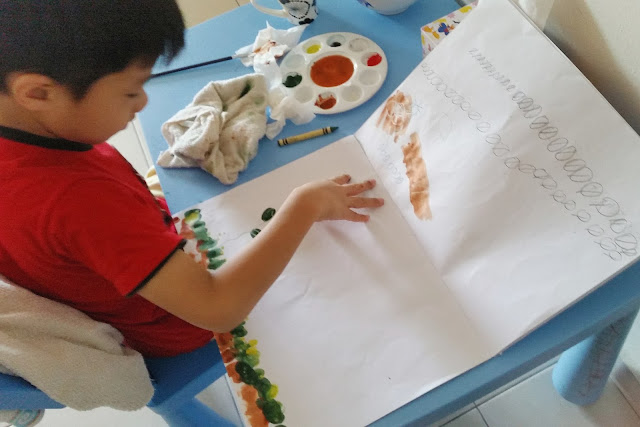 Art is one of his favourite classes so he was excited to do this cool fingerpainting art at home. We found it amusing that strong-willed Bubs was unusually insistent in following the art teacher's suggested composition, right down to the exact number of flowers ;) 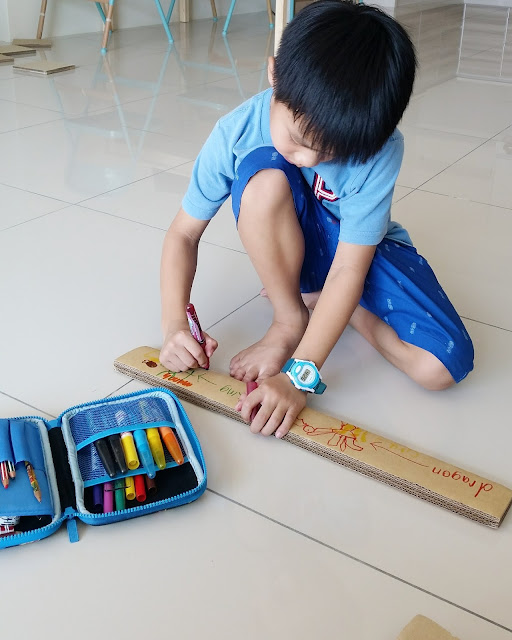 And random scribbling to his heart's content. He's recently discovered the beauty of ink-based markers (more vibrant & bolder than colour pencils) and is obsessed with using them all the time.
Posted by The Nonya at 10:49 AM 0 comments

We took a whirlwind trip to KL earlier, spending just a night there but spending it on a lot of truly yummy eats.

We arrived just a little past lunch time and spent it at Red Kettle, Taman Desa, mainly because I've been craving for its chocolicious soft serve and Hubs loves their innovative menus. The cafe was jam packed on a Saturday as it was peak time but the wait staff were very pleasant and quickly cleaned a table for us. 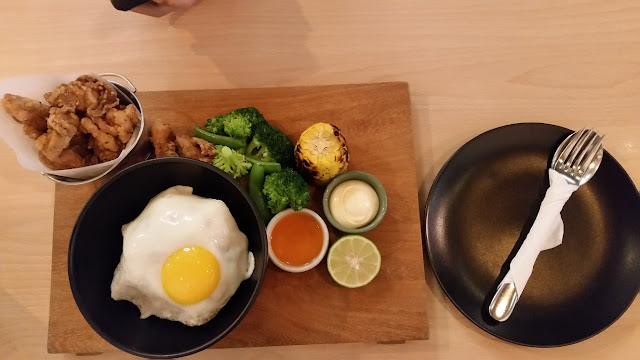 I'm not usually a fan of rice-based dishes but the fried chicken karaage and rice really hit all the right buttons. I usually find fried chicken and plain white rice to be a lil dry but the sauces and twist of lime added a nice zing to the dish. The green veg were steamed to perfection and still crunchy. Bubs absolutely loved the crispy chicken pieces. 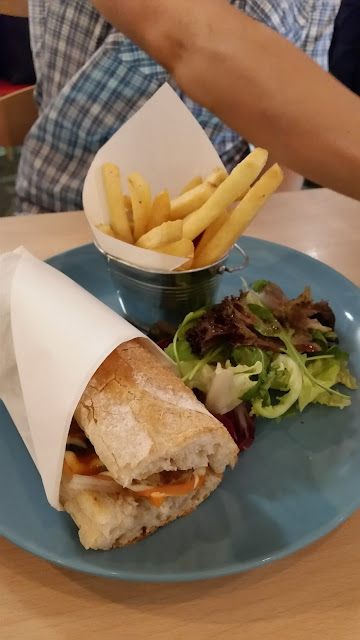 Hubb's choice was the Vietnamese pork meatball sandwich which was a nice, crusty baguette stuffed with tender pork meatballs, a medley of sauces that had notes of lemongrass, pickled veg and a piquant chilli mayo. I stole a few bites of it and found it to be kickass.

"I want chocolate ice cream in a cone!" Bubs demanded even before we stepped into the cafe. 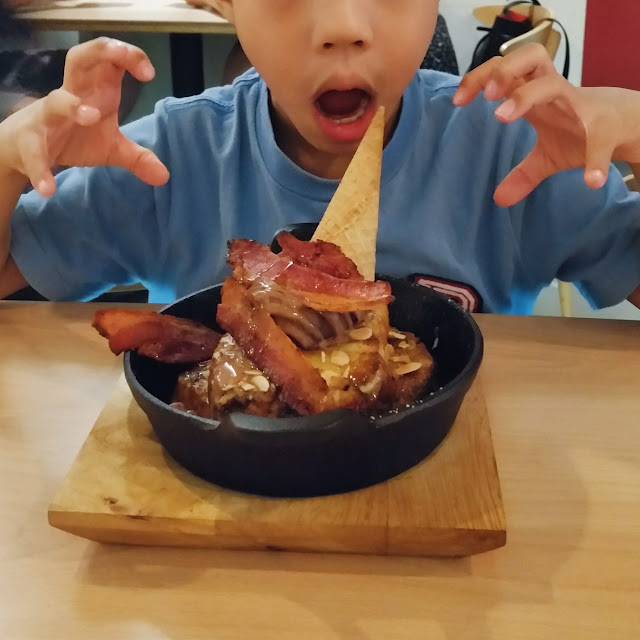 Voila, dessert was everyone's dream come true all on a single skillet.

Needless to say, the 3 of us polished this off easily. Bubs promptly plucked the cone and what remained of the ice cream up quickly before it could melt any further. Hubs complained mildly that the salty rashers of bacon was weird in a dessert but I relished it every bit of it (less men, more share), piling more chocolate ice cream on top of it before spearing it onto a soft cube of French toast. Mmmmm, perfection <3

We continued our culinary adventure during dinner time with KL Godma, who always knows the best eating spots. She was raving about how amazing the iced watercress drink was at Monkey Noodle Bar so we drove around Taman Paramount in the drizzling rain a few rounds just to find a parking lot.

When we finally found a lot and hustled over to get a table, we were informed that sadly, the cold watercress drink already ran out. You should have seen the look of disappointment on KL Godma's face ;) Thankfully, they still had hot versions of the drink and agreed that they wouldadd ice cubes to my mug but did warn that it might dilute the taste a little. 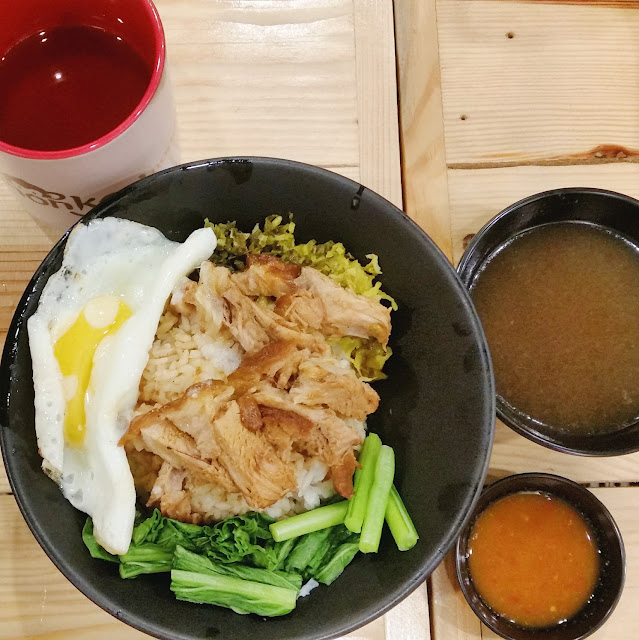 "So? What do you think of it?" KL Godma asked after I took a sip of my drink.

It tasted exactly like watercress soup but without the porky taste. I didn't know if I was gulping down soup or a drink!

This was KL Godma's stewed pork rice stewed with a side of preserved mustard greens and topped with a sunny side up egg. 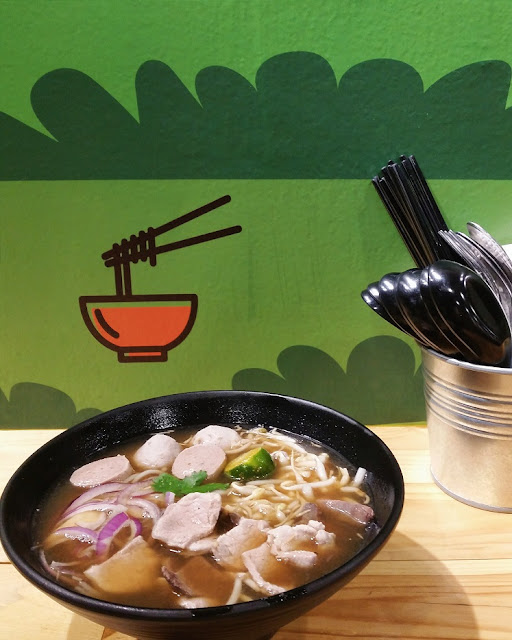 Bubs and I shared the pork noodles which came in a larger than expected portion and generous helpings of pork slices.

We under-ordered on purpose because KL Godma promised us a truly delightful dessert place just next door. 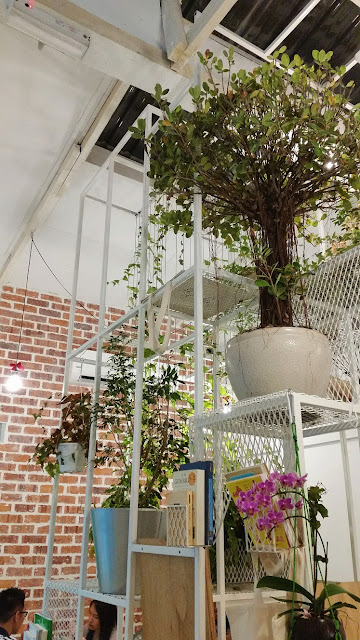 Kakigori dishes out delightful bowls of shaved ice concoctions. While they are slightly on the pricey side (my parents would choke at the idea of RM15 high class ice kacang), it is a lovely place to chill and the desserts are HUGE. 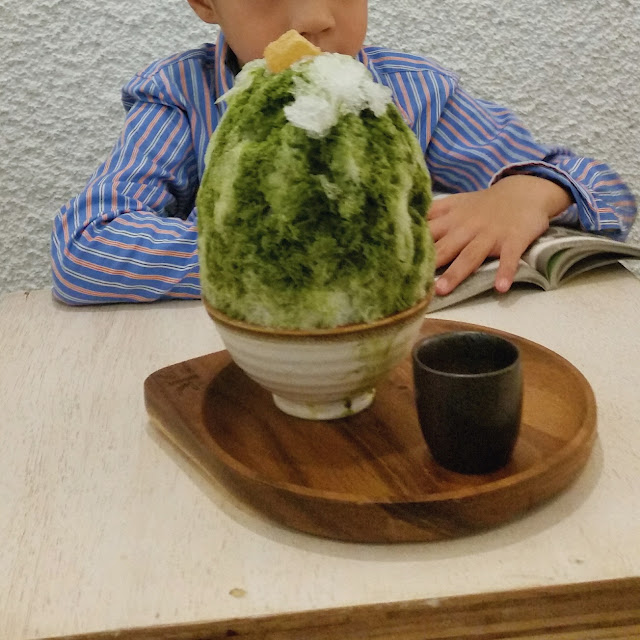 Look at the size of this Uji Matcha, literally bigger than Bub's head. Be warned, the matcha is a premium grade from Japan, which gives it a slightly grassy, strong scent and only for green tea lovers. There are tiny chunks of red bean hidden inside and it comes topped with home made warabimochi and a small cup of kinako milk. 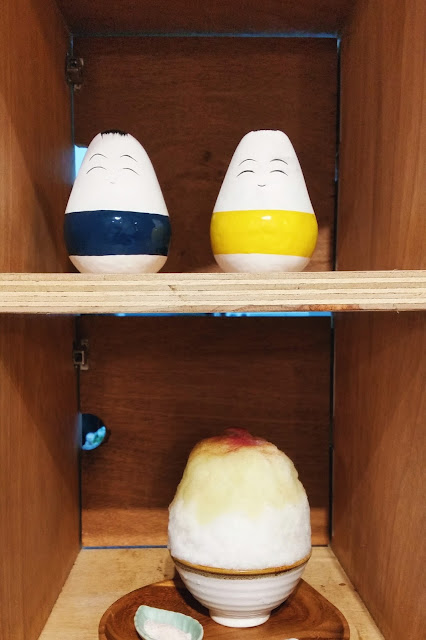 I thought KL Godma's choice of Guava was much better and I can see it being a hit on blistering hot days. The guava bits were blended into the ice itself, giving it an interesting, pulpy texture. What made it stellar was the the petite dish of assam powder mixed with salt that you're meant to dip your spoon into before taking a scoop of the shaved ice. The sour, salty kick mellowed with the sweetness of the guava ice was unbelievable! 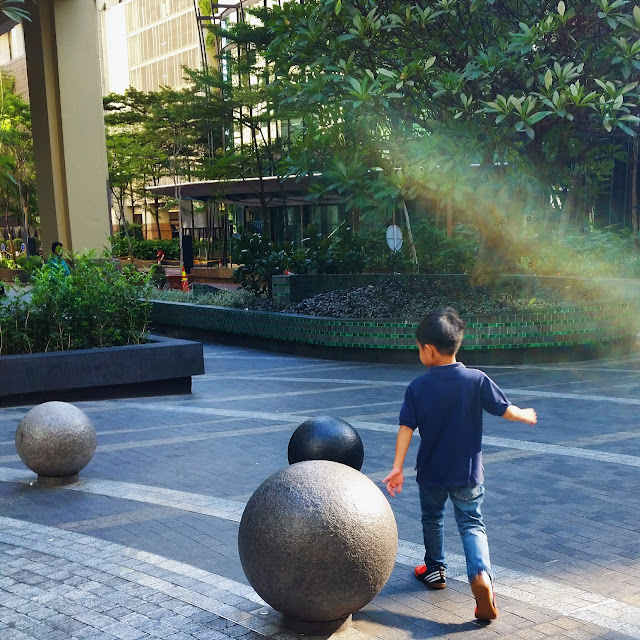 Bubs really enjoyed his 24 hours in KL with all of the feasting and spending time with KL Godma. Here's to the next trip ;)
Posted by The Nonya at 10:39 PM 0 comments

A handful of things that fill my heart with <3 and joy :) 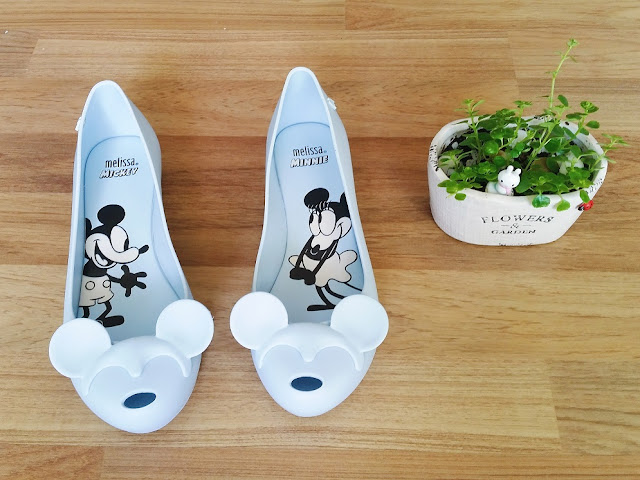 I've always been a fan of Melissa jelly flats since I could wear them for 10hrs straight at Legoland without any blisters/chafing. The price point is a bit of a splurge but they have always been good to me so I ended up with a 3rd pair. Tee hee, I know, the Minnie Mouse ears are a bit too much - even Hubs and Bubs were asking how old did I think I was - but this icy blue pair were too adorable for me to say no to! They are insanely comfy with a bit of padding inside and the infused bubblegum scent reminds me of being in a Smiggle store. 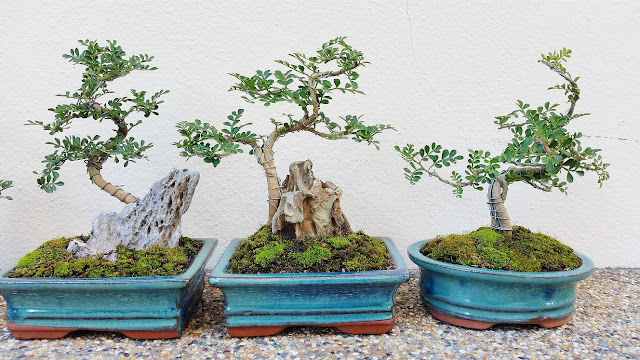 Getting a bit hooked on bonsais now ever since I went to my dad's friend's home and got a crash course on how to plant a bonsai. Can you believe that these pots are from Daiso? I got the rocks from an aquarium supply shop. 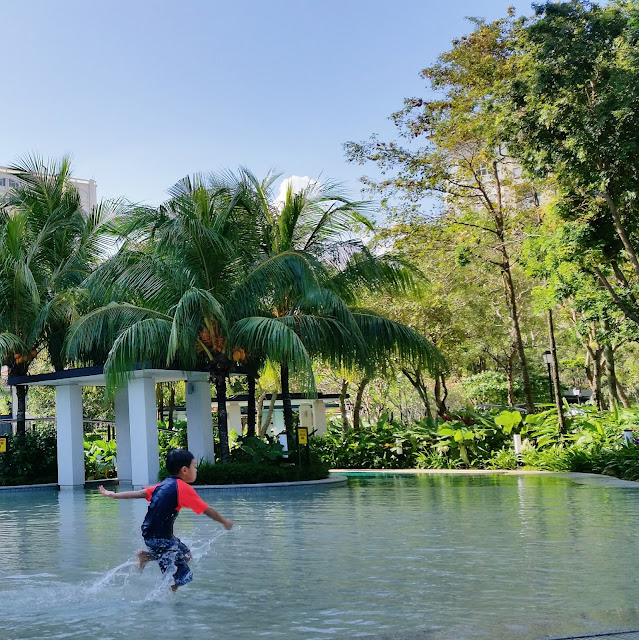 Bubs has gone through a growth spurt and is getting to be lankier now. Can't believe that in a couple more years, he'll be taller than me! He's adjusting well to his first year in primary school and happy as a lark that he still has pockets of time to mess around, care-free.
Posted by The Nonya at 10:52 PM 0 comments

Bubs started Standard 1 waaaaay back in January and we've been trying to cope with the massive change of schedule (earlier bedtime, earlier wake up time), given that he starts classes at 7.30am plus the whole of Penang seems to be on the roads at that time. He seems to like his school so far, making heaps of friends and adjusting to the routine.

I've taken to packing his lunch box the night before so it wouldn't be so much of a mad rush the next morning. Bubs also gets a RM1 daily allowance but I've managed to convince him that if he skips buying junk from the canteen, he can spend his allowance to his heart's content on weekends. Bubs is happy with his lunch boxes and is great at sharing them with his buddies during recess. I also try not to visibly flinch when he says his friends share their canteen loot like fries with him, haha! 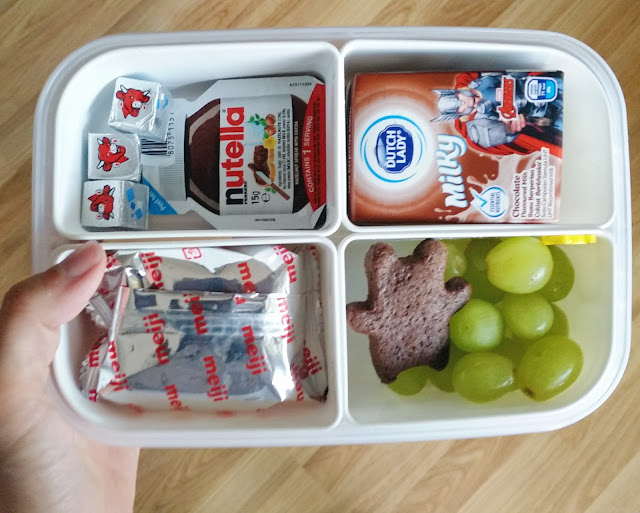 Aussie Godma got us some great bento lunchboxes during her last trip back and those are great for packing quick snacks on the go. Bubs loves nothing more than chocolate so Nutella days are red letter days for him :D 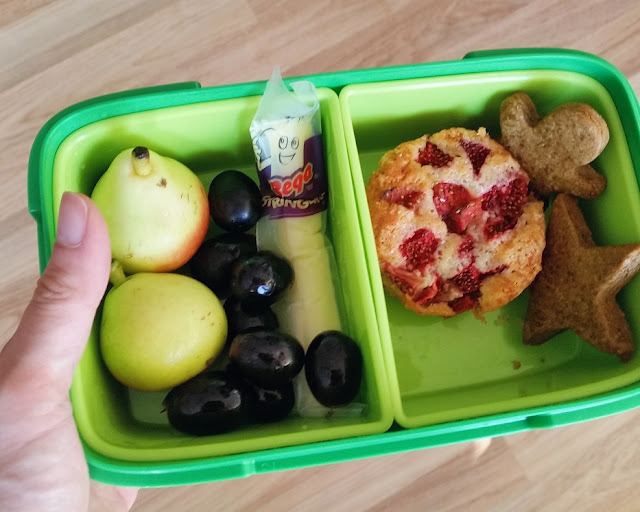 I try to pack some kind of fruit for him daily so I've taken to buying tiny fruits that are easy to pop into lunch boxes. These minature paradise pears are perfect to nibble on and don't require any kind of prep. 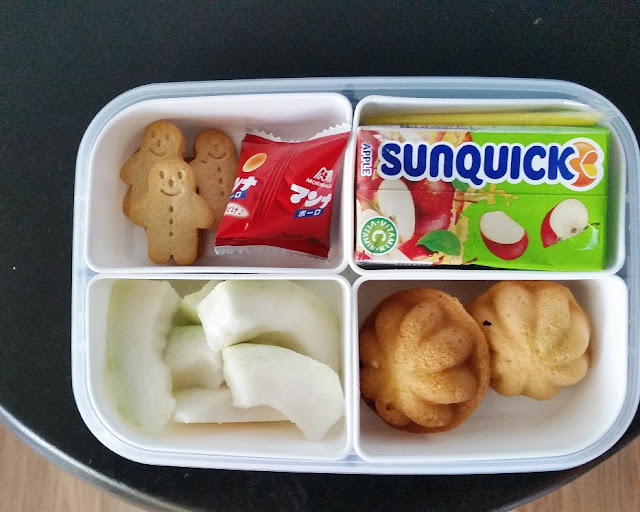 I've also taken to filling the fridge with single serve snacks that are a tiny treat for him.
Posted by The Nonya at 1:05 PM 0 comments