Recently Bubs likes to doodle random things on blank pieces of paper that he scavenges around the house. I've tried persuading him to document them all in an art journal but he refuses so whenever he leaves little drawings, I snap photos of them. 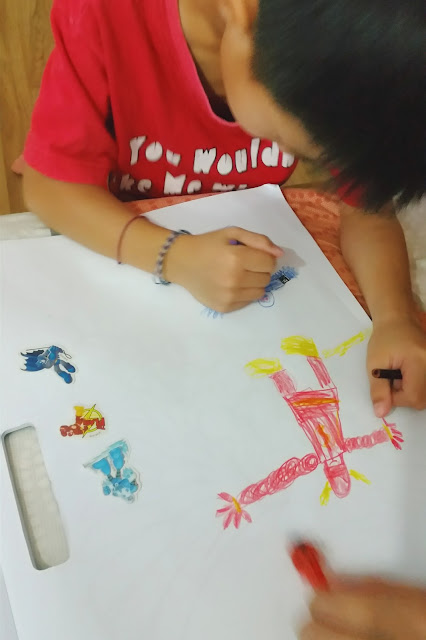 This was a superhero colouring book but he got bored with colouring it so he stuck the stickers on the blank side and started drawing his own version of them. Sooo cute and he's very proud of his artwork. 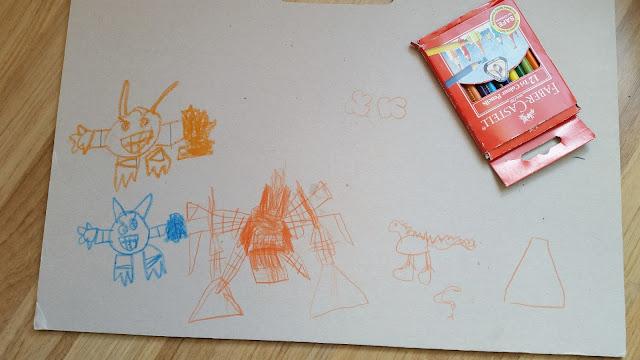 This is this other passion: sketches of robots. I've to admit, the frenzied glint in their eyes do have a certain charm to them ;) 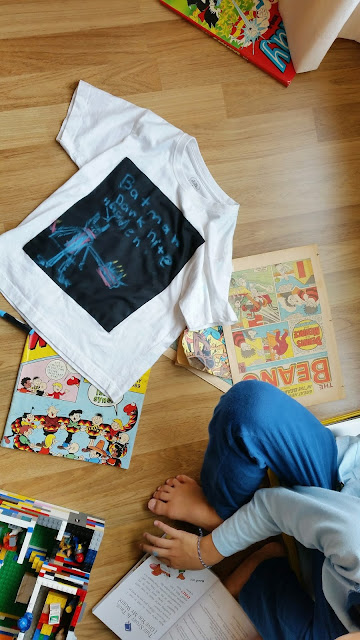 He loves his Chalkapella tee which is the perfect canvas for his creations. Bubs is learning how to spell and his scribbles are sometimes so funny that we can't help but to snicker at them. He figured out the word "nite" by sounding it and asked if that's how to spell the Dark Knight. Technically he's right (or should I say rite?) so we left it as that. The other day, he told us that he wants to "meet a parrot, Mummy, M-E-A-T!" 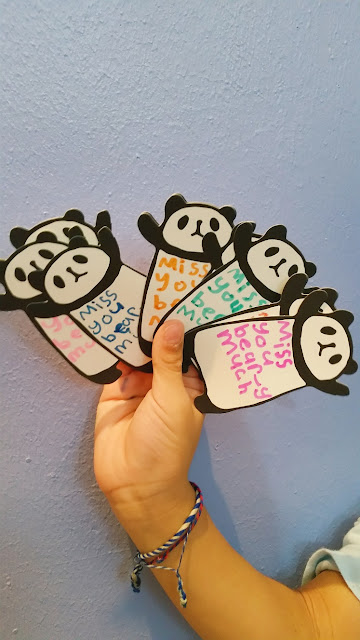 And we're working on farewell gifts for his schoolmates for his last year at kindy.
Posted by The Nonya at 11:54 PM 0 comments

Bubs was enthusiastic about his kindy graduation. He practised his songs, dances at home and kept reminding Hubs and I to prepare our speeches for it. Bubs even let the cat out of the bag by showing me the surprise song that the teacher taught them for the parents and warned me not to tell his teacher. On the other hand, I was dreading this momentous milestone; I tear up at anything sentimental and not keen on the idea of my sweet lil baby growing up so fast. 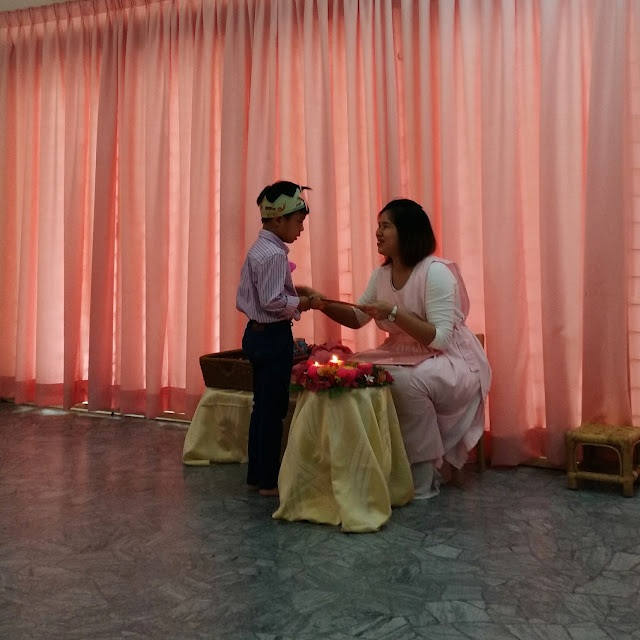 When the teacher started talking about how hard the children have prepared for this day, his shoulders started rolling in, his face glum. The moment the 6 year olds started singing, Bub's eyes turned red and he started sobbing. It went on like that for every single performance, they had to pause a few times for Bubs to go to the washroom to clean his face :(

Bubs cried so much that he even set one of the other mums off! She started dabbing her eyes and was emotional during her speech. 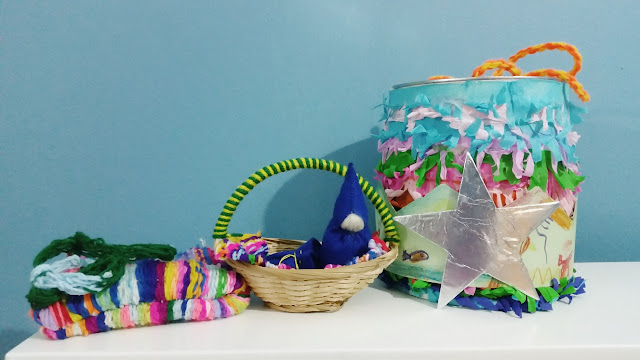 Hubs and I were impressed with all of the crafts Bubs worked on for his graduation. He made a beautifully decorated drum out of a Milo tin for the Rasa Sayang song. There was a star crown that Bubs was reluctant to remove at the end of the day. I was particularly amazed with the hand woven cloth bag that he made himself. Each 6 year old worked hard at their loom with brightly coloured yarn throughout the school year, finger knit a chain of loops for the straps followed by sewing the bag up all by themselves! 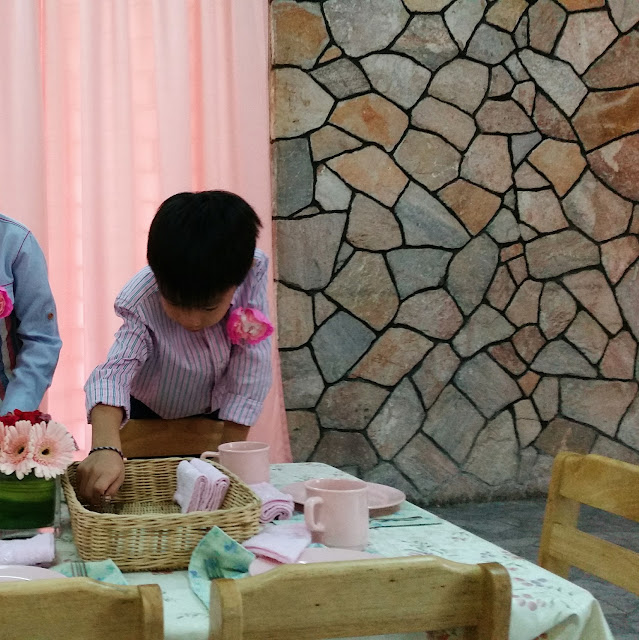 We were treated to morning tea with the graduating class and by then, Bubs was back to his old, cheerful self. The 6 year olds set the table beautifully, complete with placemats and napkins. 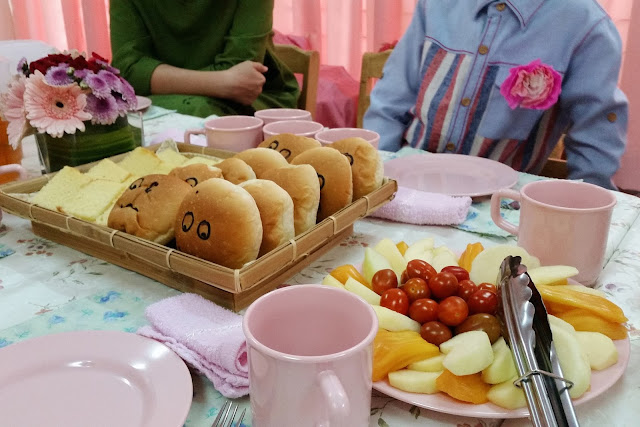 It felt so different to have Bubs being so attentive to us for a change: he poured tea for us, carefully picked up cakes, buns and fruit with the tongs. Plus it was fun to see how he and his friends chatted to each other about who could eat the most food at one go. 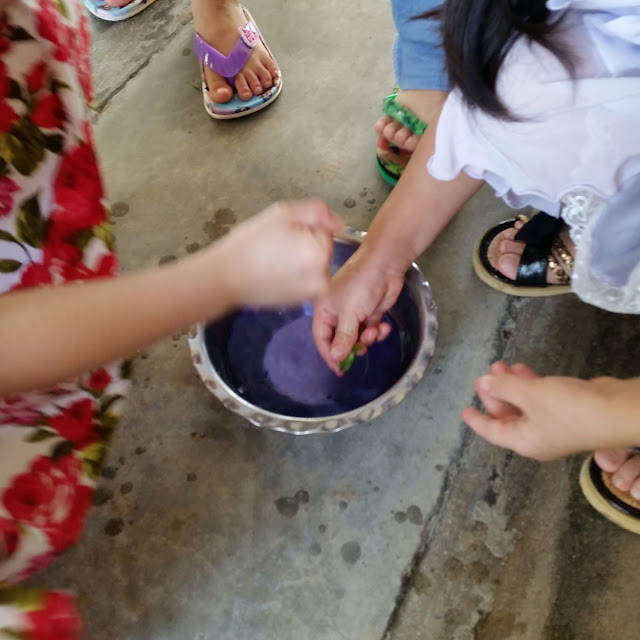 The children were getting antsy at being indoors and having to sit quietly that by the time the teacher opened the door for outside play, they all surged into the garden. Most of the girls sat by a bowl of water, scrunching the butterfly pea flowers into it while exclaiming excitedly as the water deepened into a shade of indigo. 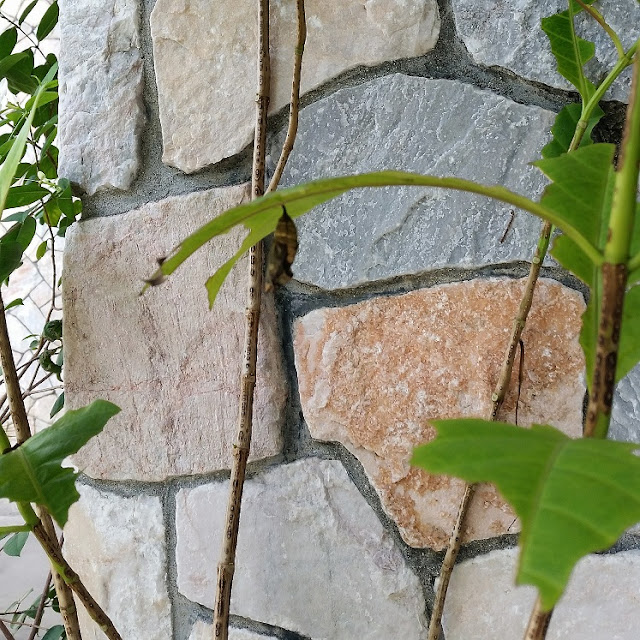 Another group of children were equal parts fascinated and respectful with the tiny caterpillar cocoon they found at the tip of a leaf.

And that was it! My not-so-quite-a-baby-anymore has graduated from kindy and will very soon be stepping into primary school :)
Posted by The Nonya at 10:19 AM 0 comments

Hub's friend recently opened a cosy boutique right in the middle of the heritage area and she was more than welcoming for me to drop by and play dress up. 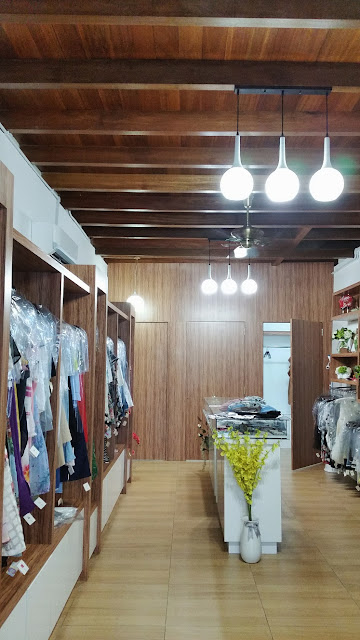 Don't let the size of the shop fool you, she has a huge range of stock, mainly Asian inspired and while some aren't on display, she's more than happy to find clothes that she thinks will be a good fit for you. 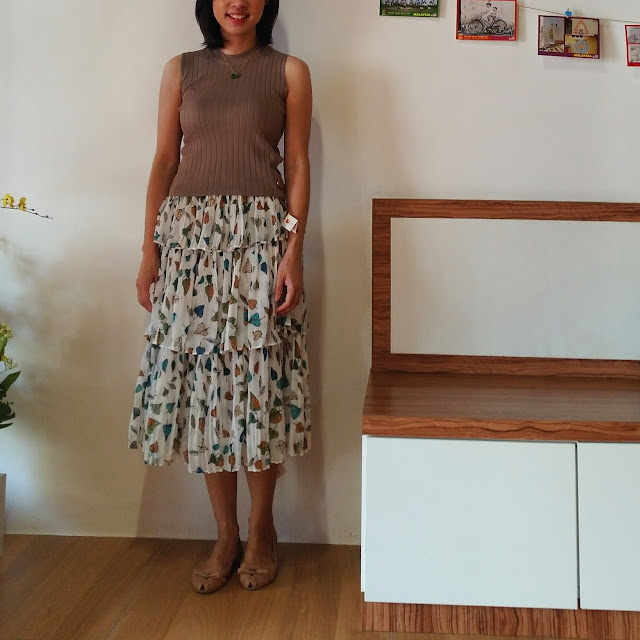 I felt like a kid in a candy store! The ruffles and cute prints attracted me to this fun skirt. Hubs helpfully pointed out that the ruffles made me look like a jellyfish #thankshubs 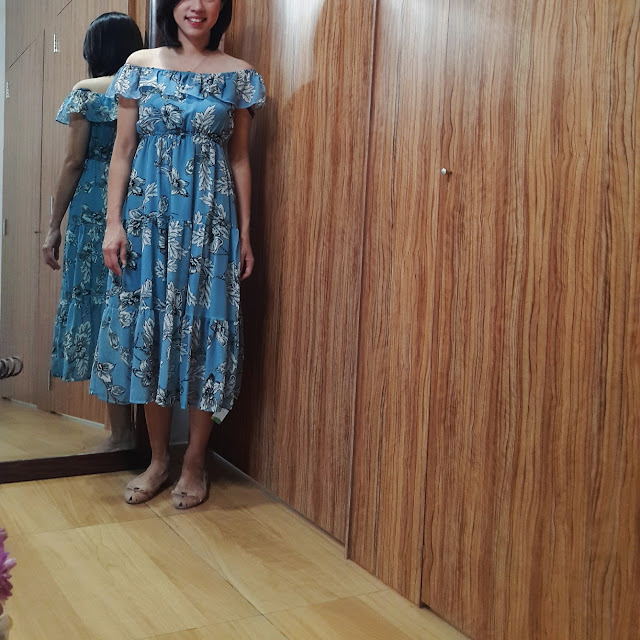 Making the most of the recent off shoulder trend coupled with my other love: florals. 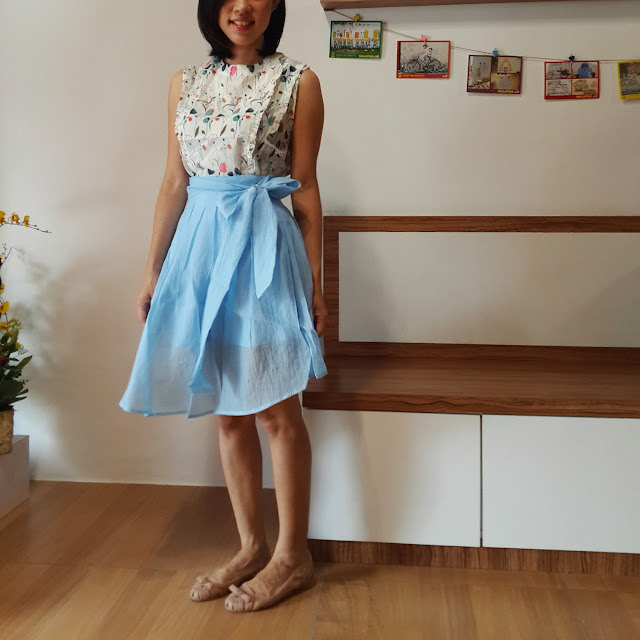 Hub's friend pointed out that I've an affinity for the colour blue ;) For some reason, this reminded me of a quirky Alice in Wonderland. 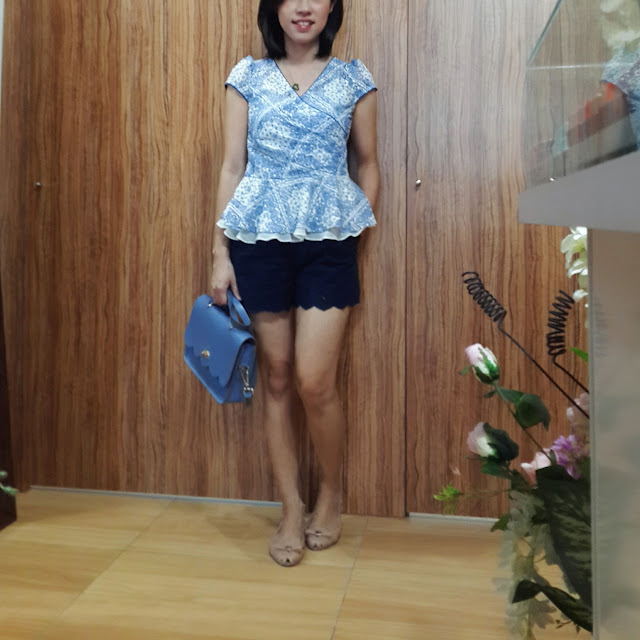 I really liked this lacy peplum top and thought that it'd be a versatile option for work when paired with a pencil skirt or a casual day out with shorts or jeans. 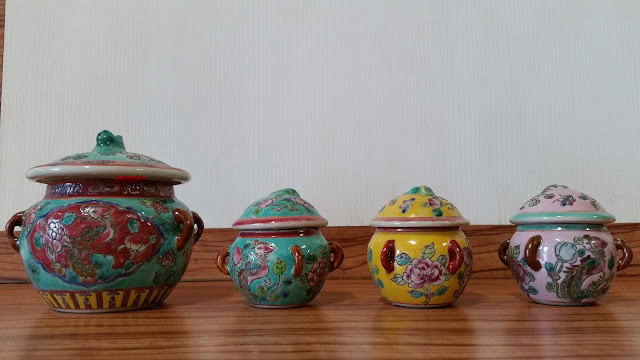 Random shot of antique Nonya glassware that she also carries in the boutique. 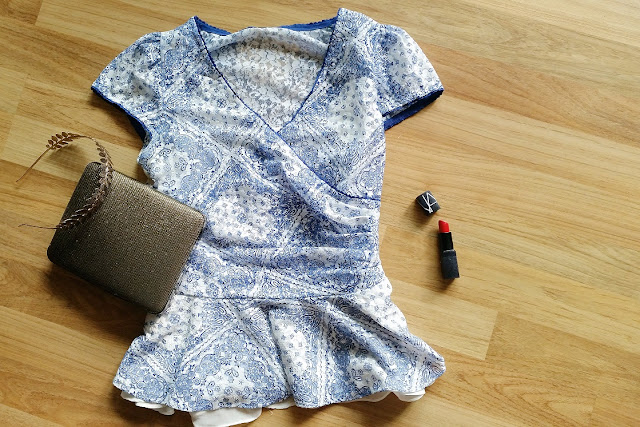 The peplum made its way back home with me :)

Bubs was all geared up for the Penang Mini Maker Faire as they promised cool robotics and fun science stuff. We were really impressed with the set up. All of the events were free upon registering at the entrance and the volunteers were passionate about their products. It also gave us a sneak peek into what the future possibly holds for Bub's generation. 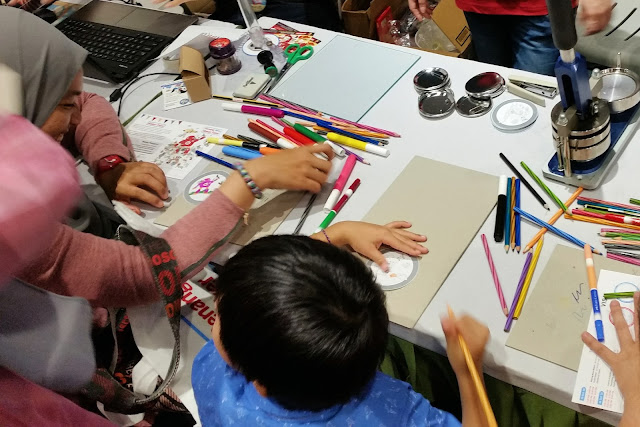 Bubs was proud of his name badge that he coloured at the registration booth. 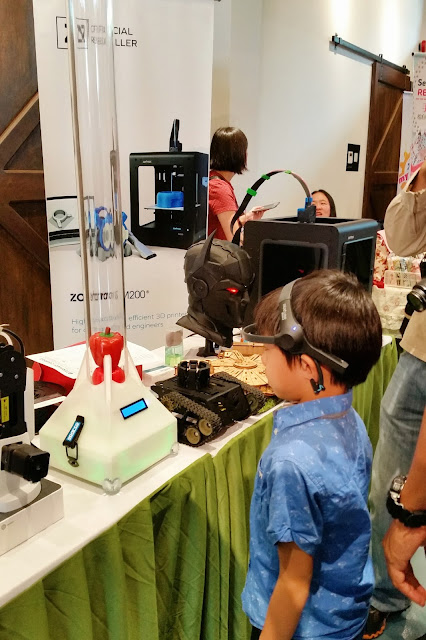 This mind control machine reminds me of Professor X from X Men. It converts your brain waves into kinetic energy and requires razor sharp focus to move the object in the glass tunnel. 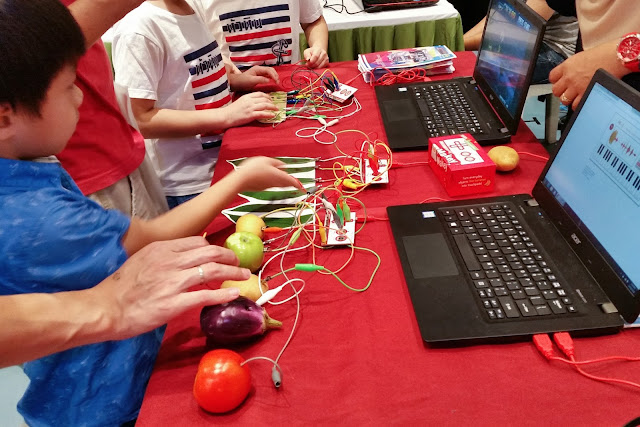 Bubs was really gung ho about pounding on the fruits and veg circuit board to get the e-piano on the laotop to play. 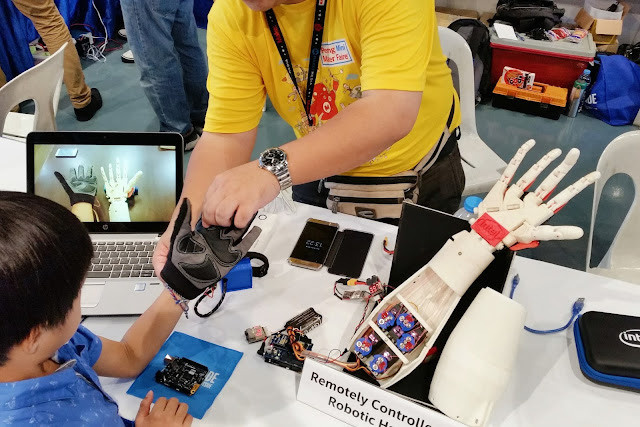 This cool invention was another thing that reminded me of Hollywood blockbusters: a remote controlled robotic hand. Ironman, anyone? The gears in the robotic hand were surprisingly responsive and smooth. 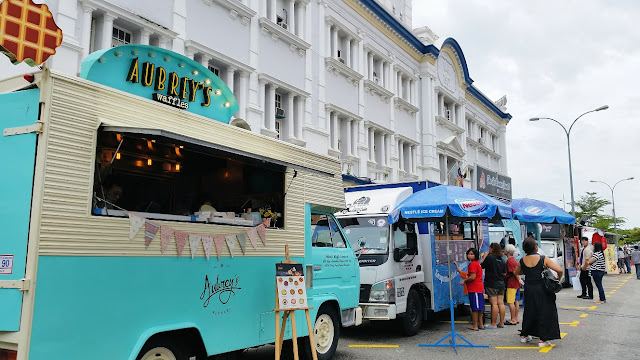 Food trucks lined outside along with a shaded area for people to snack in. Bubs was ravenous after a few sessions of playing with the demo exhibits. 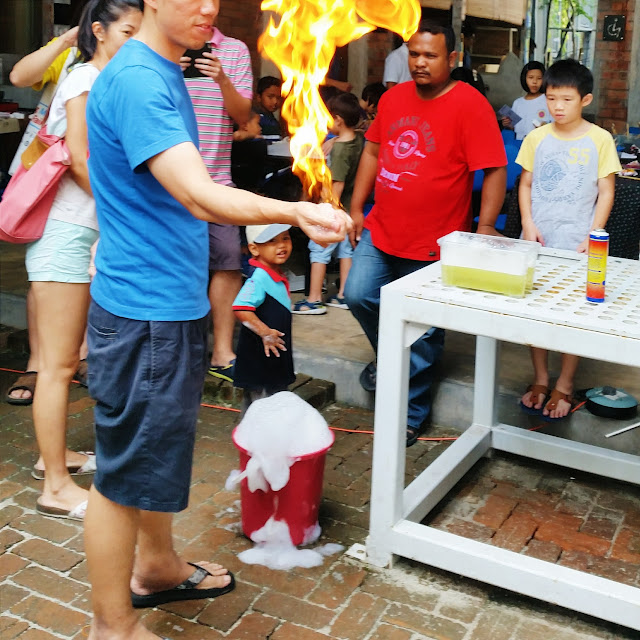 There was something for everyone. This is Hubs gamely giving the methane filled soap bubbles a go. Bubs was in awe for ages after this experiment. 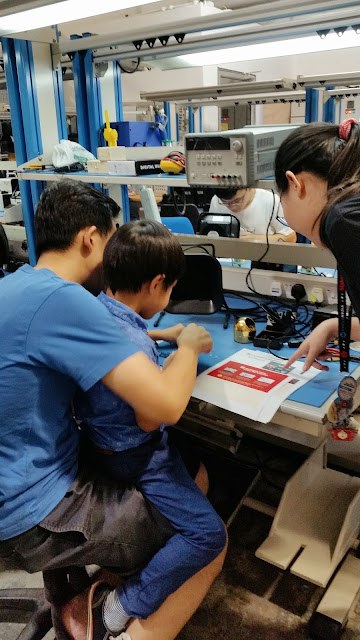 The soldering bit was the last activity we did for the day and for good reason. Hubs and Bubs were supposed to make a LED lit keychain. We gave Bubs multiple warnings about how hot soldering irons were and ... he promptly forgot, picked it up by the wrong end and ... OUCH.

Bubs was wailing from the pain and I brought him to the first aid station that promptly took him to the rest room to rinse his finger in cold water. The volunteers were really helpful and calmed Bubs down. He was left with a nasty looking blister but the next day, Bubs was actually proud of his "bubble" and showed it off to everyone at school ;)
Posted by The Nonya at 11:28 PM 0 comments