January flew by in a blink of an eye! Bubs is enjoying the last year of his kindy and so chuffed that he's one of the oldest kids there now. They've been learning to write Chinese characters and do counting by skipping rope so that's been keeping him busy. 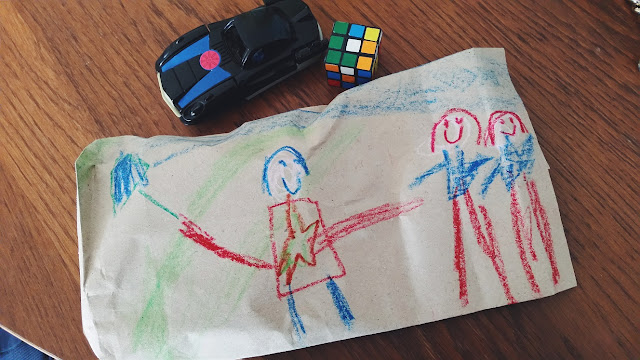 I guess one of the biggest things I'll miss the most about Bubs leaving his kindy is the cute bread and paper bag that they make every week. 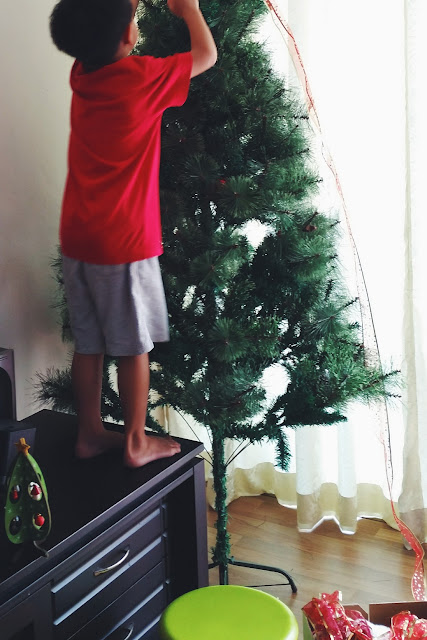 After close to 3 weeks, Hubs finally took down the Xmas tree with some help from a stray elf that Santa left behind ;) 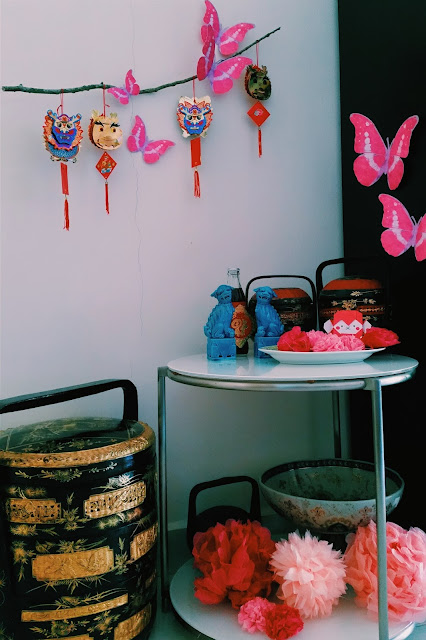 As we transition from one festival to another, we've finally gotten the Chinese New Year decorations up in a tiny corner. 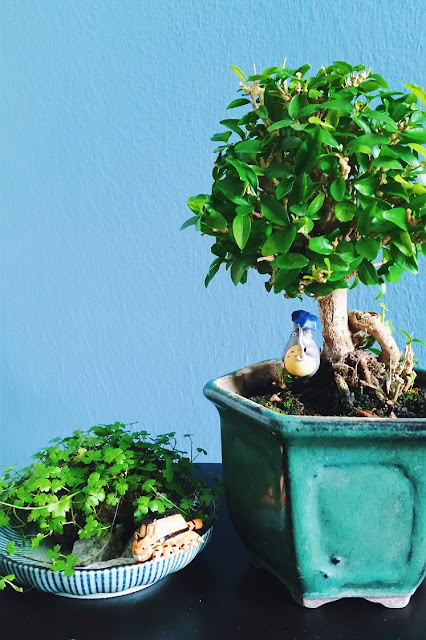 What better way to welcome spring than by sprucing up some pot plants. Bubs and I have fallen head over heels for these tiny Totoro plant charms. The water jasmine bonsai (on the right) has been with us for 3 years now and since it's still thriving, I added another small bowl of clover with "magic rocks" that Bubs pinched from the garden. 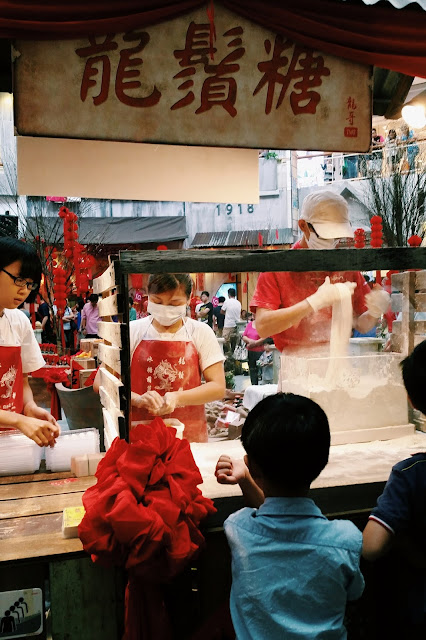 Bub's favourite treat this year: dragon beard candy where they're hand made live in front of you for RM8 a box at Queensbay Mall. I've tried freaking him out by telling him that they're actually little cocoons like the Very Hungry Caterpillar but that didn't deter him from popping them into his mouth :)
Posted by The Nonya at 11:09 AM 0 comments

A roundup of my outfits since we've been having a nice long break and Hubs had the time to snap some photos for me. 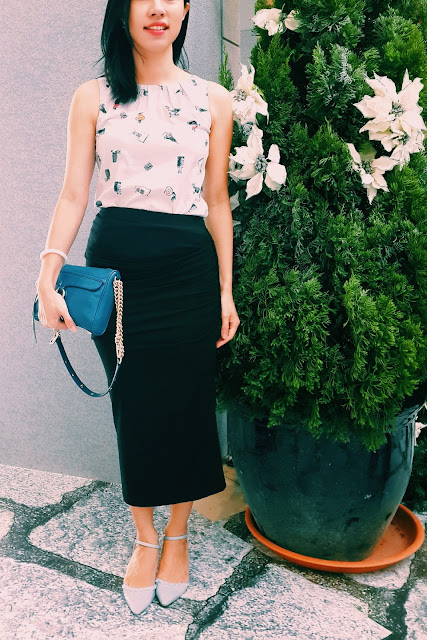 I'm blessed with a cousin (lookin' at ya, Jean!) that is the same size plus has the same taste as me. This Dorothy Perkin sleeveless top was stolen borrowed from her wardrobe and it all kinds of perfection with vintage perfume bottles printed on a pale blue background. The ruched, jersey pencil skirt was a steal from the Forever 21 sale, fully lined too. 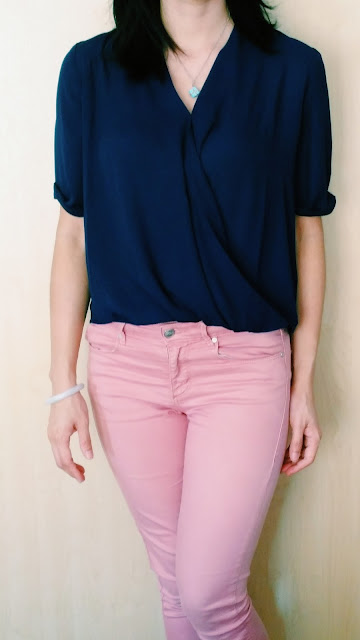 Speaking of fashion twins, Jean and I got the exact same Topshop drape-y blouse from the recent Topshop sale at 50% off. We both got it in dove grey when we saw it on our favourite blogger . It's such a versatile, comfortable top that drapes beautifully, perfect for days when you want to go casual chic. 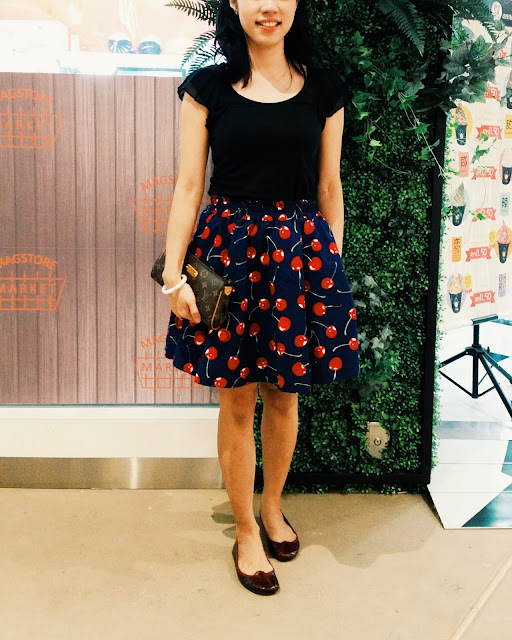 This cheap and cheerful cherry print swing skirt has been one of my best fashion bargain buys from Princess Diary. They sell so many cute cotton skirts with the cutest prints and the secret is in the thick, elasticized waists that makes it a perfect fit even though it's free-sized. They currently have some vintage themed ones (think pale green with red roses and white lace hemming).
Posted by The Nonya at 10:56 PM 1 comments

Email ThisBlogThis!Share to TwitterShare to FacebookShare to Pinterest
Labels: outfits

An air-conditioned cafe (such a respite from the blistering heat) that is not only kid friendly but also offers fun, hands on science tinkering in addition to serving one of the best pizzas in Penang? That lil piece of haven can only be Yin Sourdough Pizza located in the beautifully restored Wisma Yeap Chor Yee which is also home to the Penang Science Cafe.

I'm very particular about kids' corners in cafes because more often than not, it's usually housed in some dingy corner with gunky looking toys that looked as though they have been chewed on. I literally ate my words when I saw this simple yet inviting space at the Penang Science Cafe. 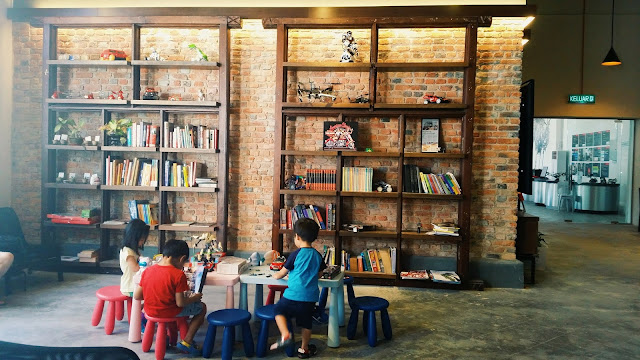 A sturdy shelf of science books, including a handful of comics (Bubs immediately gravitated to the X-Men graphic novel), frames the rustic red-bricked wall where colourful Ikea children's tables and stools beckon young 'uns to come sit and play with the numerous toys on display. With the bright sunlight streaming in, it was such a pleasant place to sit for a while. 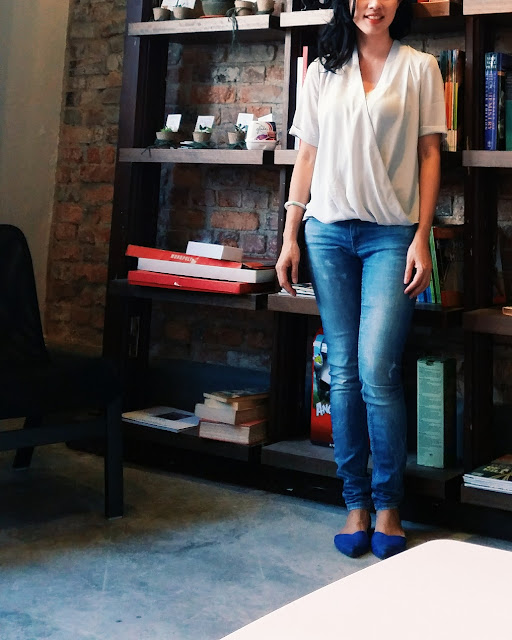 Plus, vainpot me thought it made a nice backdrop for an outfit of the day shot, hehe. 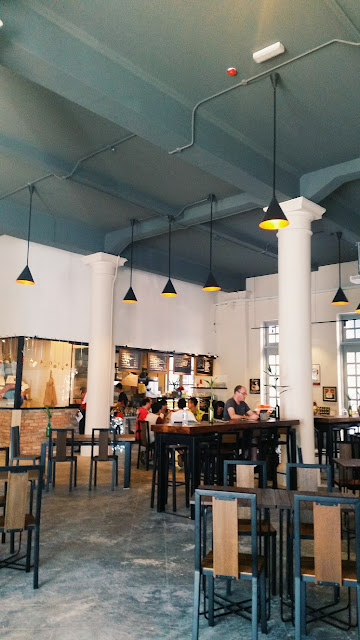 There is so much space at the dining area and the open concept even extends to the open kitchen where you can watch the pizza maestro freshly handcraft your pizza to order. My jaw dropped when I spotted a few Tablets left (securely locked of course) on the long table for visitors to do a spot of casual browsing. 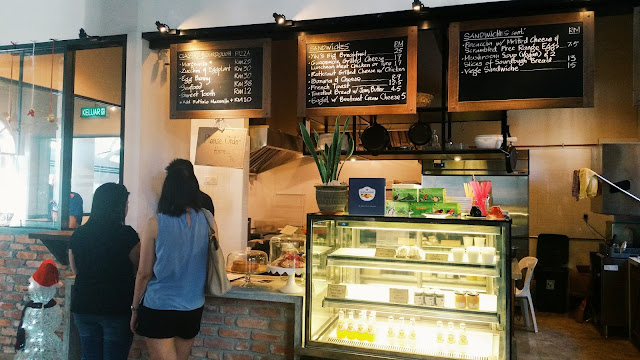 Pizzas, sandwiches and coffees are on order here. Yin popularised sourdough bread in Penang with her bakery (still operating at Pesara Claimant) and experimented with pizzas by using the sourdough scraps she had. We settled on the Eggs Benny pizza and French toast for the kids. 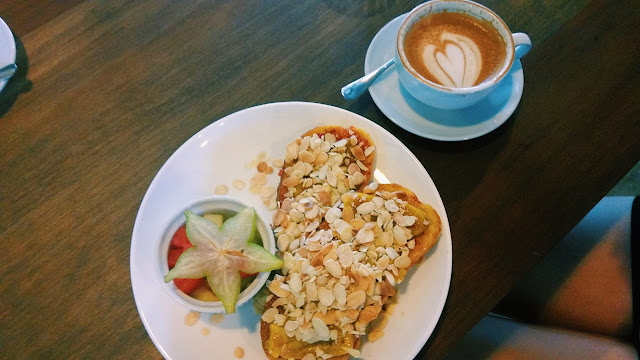 The French toast (RM12.50) came very generously sprinkled with flaked almonds and a small serving of local fruits: watermelon and guava chunks and a slice of starfruit. It went down well with the kids and Bubs, notorious for his sweet tooth, kept asking for more helpings. The Eggs Benny pizza (RM30) was a delight to behold, a tomato base topped with spinach, home made chicken bratwurst with a luscious, still-runny egg. For an additional RM10, you can add Italian buffalo mozzarella to it. Be warned that the pizzas served here are traditional Neapolitan ones where it is almost wafer thin with crispy, blistered crusts but soft and very moist - dare I say wet - in the middle. It was very flavourful and already I'm making plans to return on a lunch date with Hubs for this.

Remember that I mentioned earlier that it's not just a cafe, but it's also a Science Center? The Penang state government is actively promoting science and technology in a more fun and hands on way amongst school children. We spotted a couple of classes in progress (3D printing, Lego robotics just to mention a few). 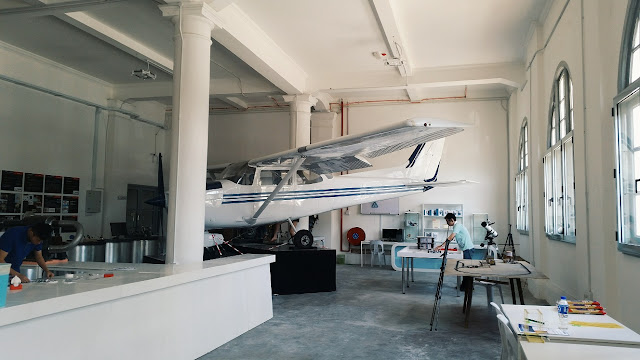 There is an open exhibition area at the back that was housed with awesome science activities, such as magnetic levitation and a Van de Graaff generator. 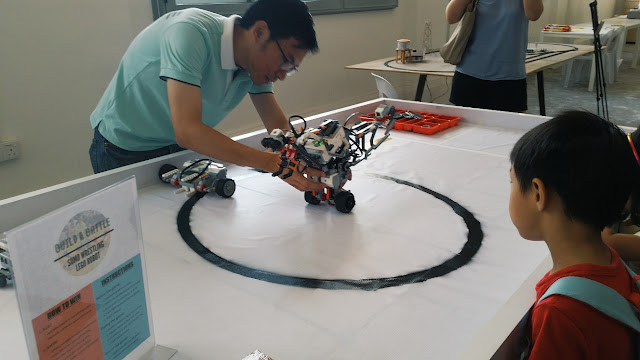 The mentor on duty was kind enough to demonstrate Lego robotics for us. Bub's eyes nearly popped out when he saw the self balancing dino on just 2 wheels. It was such a fun place!