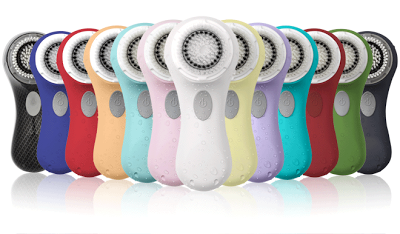 It has a hefty price tag but I can honestly say it's pretty worth it. True to what Hubs mentioned, it feels like I'm using an electric toothbrush on my face, but a high speed oscillating bigger version that gently massages and yet makes your skin feels squeaky clean. It comes with a cool magnetic charger that I spent quite some time snapping it on and off repeatedly *tee hee* I'm easily amused like that ;)

Mine is the original Clarisonic Mia, not the Mia 2. The major differences between the Mia and the new Mia 2 would be that Mia 2 has a choice of 2 speeds and a beep to remind you to move on to the next part of your skin - which again, sounds a lot like an electric toothbrush!

I don't have sensitive skin and wanted to get the normal brush head but the sales associate talked me out of it, saying that they generally only recommend the normal brush head for men so I went with the sensitive skin brush head. My skin type used to be normal until after I stopped breastfeeding a couple of months back and that was when all hell broke loose. I started getting angry red blemishes that take ages to subside - the term "pizza face" is a bit of an understatement here :( I'm letting it be for a while and crossing my fingers hoping that there wouldn't be much acne scarring.

From all of the reviews I've read - it's best to use it with a foaming cleanser and not to overuse the Clarisonic Mia. Some people use it once a day, some use it on alternate days, others complain about breakouts. I decided not to further tax my skin and used it every 2 days with the Sukin Foaming Facial Cleanser. I like how it doesn't aggravate my acne and my skin feels smoother - either that or my hand is still feeling the aftereffects of the powerful oscillation and is tricked into thinking that my face is softer :P

After each use, I rinse it, remove the brush head and let both dry out of the bathroom. I found a handy hint online: turn the Clarisonic on again after using it and let it scrub into a towel for a few minutes, this will help remove all the water in it. While my skin is still damp, I follow up with a couple of drops of Melvita Argan Oil or Trilogy Rosehip Oil.
Posted by The Nonya at 9:33 AM

Email ThisBlogThis!Share to TwitterShare to FacebookShare to Pinterest
Labels: beauty