There was a collective gasp of air when we stepped into the brightly lit and clean interior of Tai Tong at Cintra Street. It was my first time there even though De Tai Tong has served generations of patrons with tasty dim sum morsels at the same spot for decades. Bubs and I were so entranced with the colourful lanterns swaying from the ceiling.


Look at the traditional cellophane paper lanterns in all colours of the rainbow! This evoked happy childhood memories of Dad bringing us to the Penang Plaza where the ceiling would be festooned with lanterns and we'd crane our necks up trying to spot the best one to bring home. The lanterns have gotten a bit more modern with characters like Powderpuff Girls, Hello Kitty and Angry Birds making an appearance.


As with most old fashioned dim sum shops, a basin of hot water is provided to clean the tiny tea cups and chopsticks with and each customer is provided with 2 tea cups so the tea cools faster for you to sip. Little old ladies pushing carts laden with steaming dim sum make up part of the charm of De Tai Tong. These ladies are experts at maneuvering through tight corners and I wonder if they hold derby races with the push carts ;)

Every time a push cart stopped by, we couldn't stop picking out more food. Spicy stewed chicken feet, braised pork ribs, soft, cloud like pork buns, garlicky steamed mussels, golden flaky egg tarts - the table was groaning under the weight of all the food we chose. 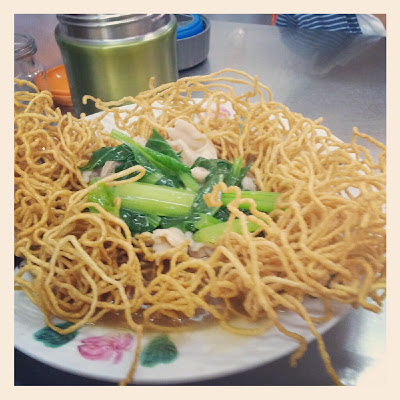 Tai Tong also offers a host of ala carte dishes that aren't on the menu. We tried out the sang mee (crispy noodles) based on a friend's recommendation and it was absolutely stellar.


We didn't go back empty handed either - lookeeeee what we've got! An old school majestic dragon lantern! Bubs was leaning towards a garish looking Donald Duck or Angry Bird but since I've always wanted a dragon lantern as a kid and my parents refused to buy it for me I persuaded him *ahem* to pick a dragon lantern instead. We were squabbling over who got to hold it and I can't wait to light a candle in it and let him carry it around in the garden.
Posted by The Nonya at 11:49 PM