Hubs and I felt really guilty that every single year, we never throw Bubs a birthday party. We usually have just really tiny lunches/dinners with family. Now that Bubs has started school and is tight with a bunch of pals, we thought it'd be the perfect time to have a party at Urban Playground, Penang Times Square. As Bubs is a fan of Lego and super heroes, we had a Batman Lego theme. 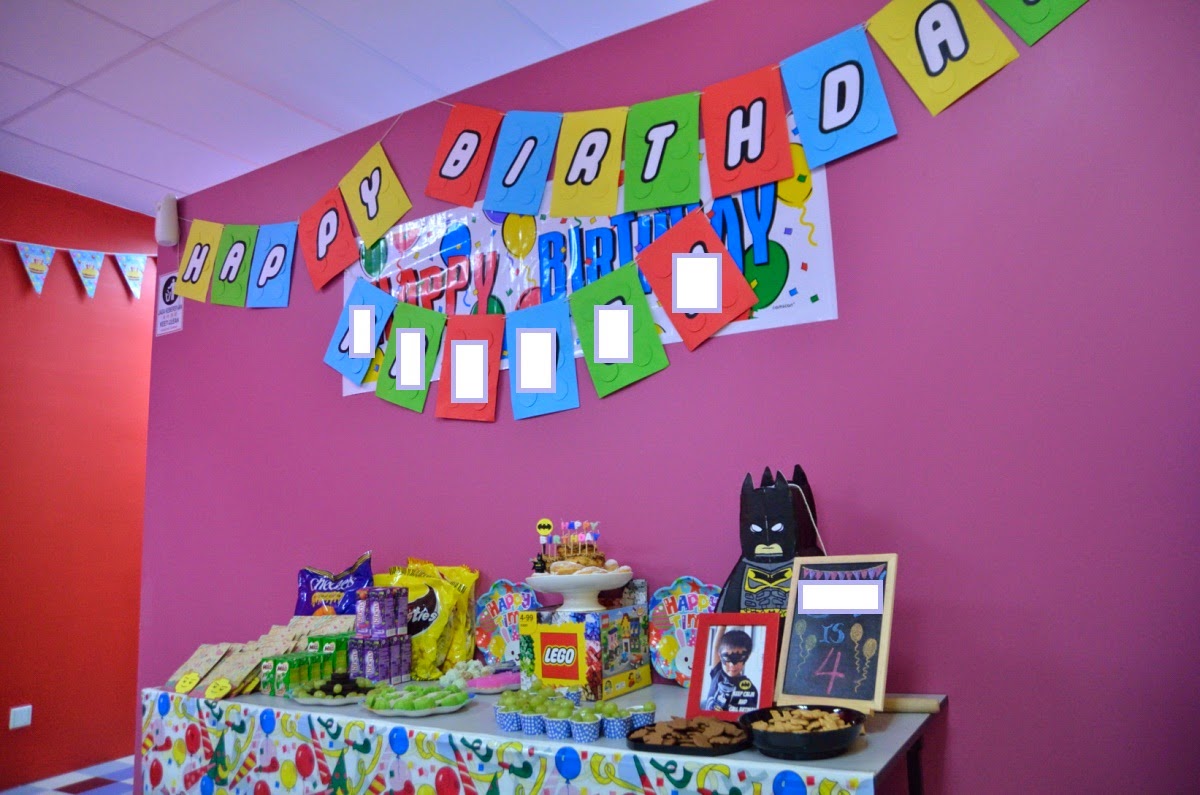 Siew (who like me, prob spends wayyyy too much time on Pinterest) helped a LOT with the planning - more on that in a separate post and on the day of the party itself, designed the set up of the snack table. Pizza was provided by Urban Playground and we brought in extras like Nonya kuih, grapes, Oreos, cookies, crisps and some drinks. Given the fact that I'm such a klutz when it comes to all things artistic - please let me shamelessly gloat over the fact that I DIY-ed the Happy Birthday banner (decked out in Lego fonts on Lego bricks) and the Batman pinata. Siew chalked out "Bubs is 4" on a mini blackboard and I printed out a photo of Bubs in his Batman Lego tee. 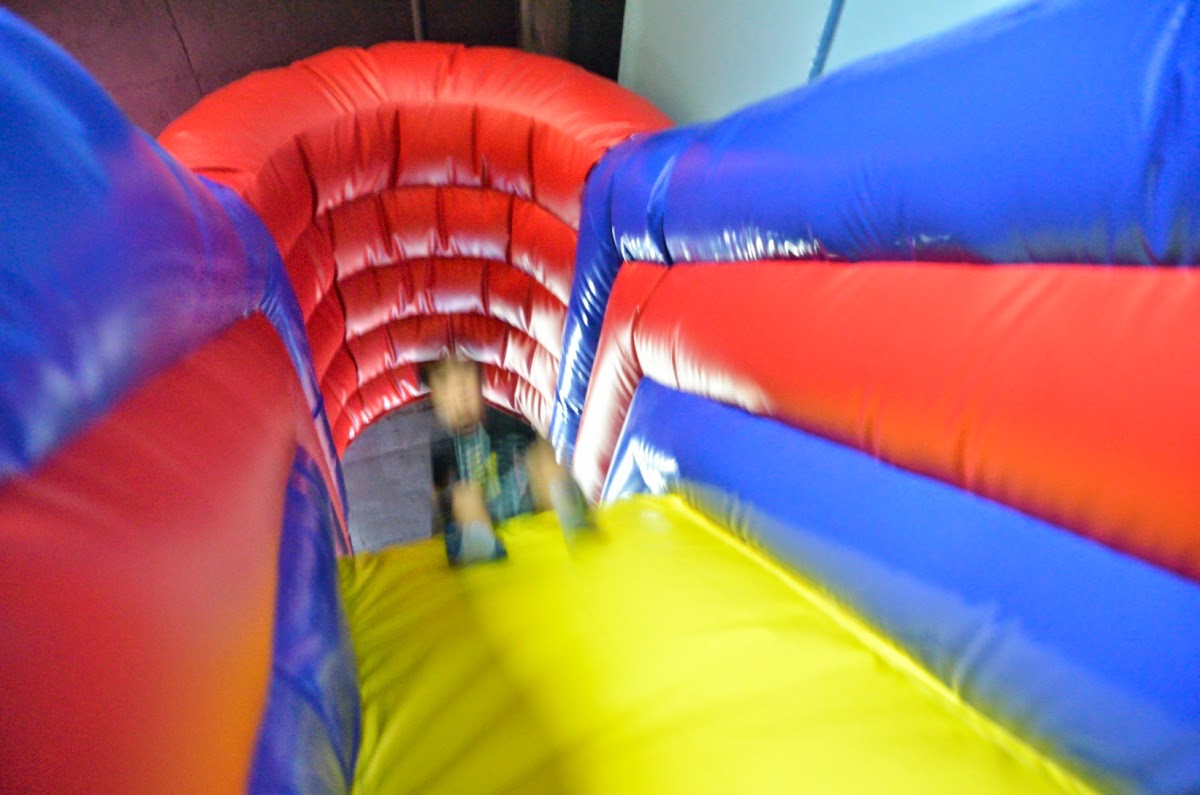 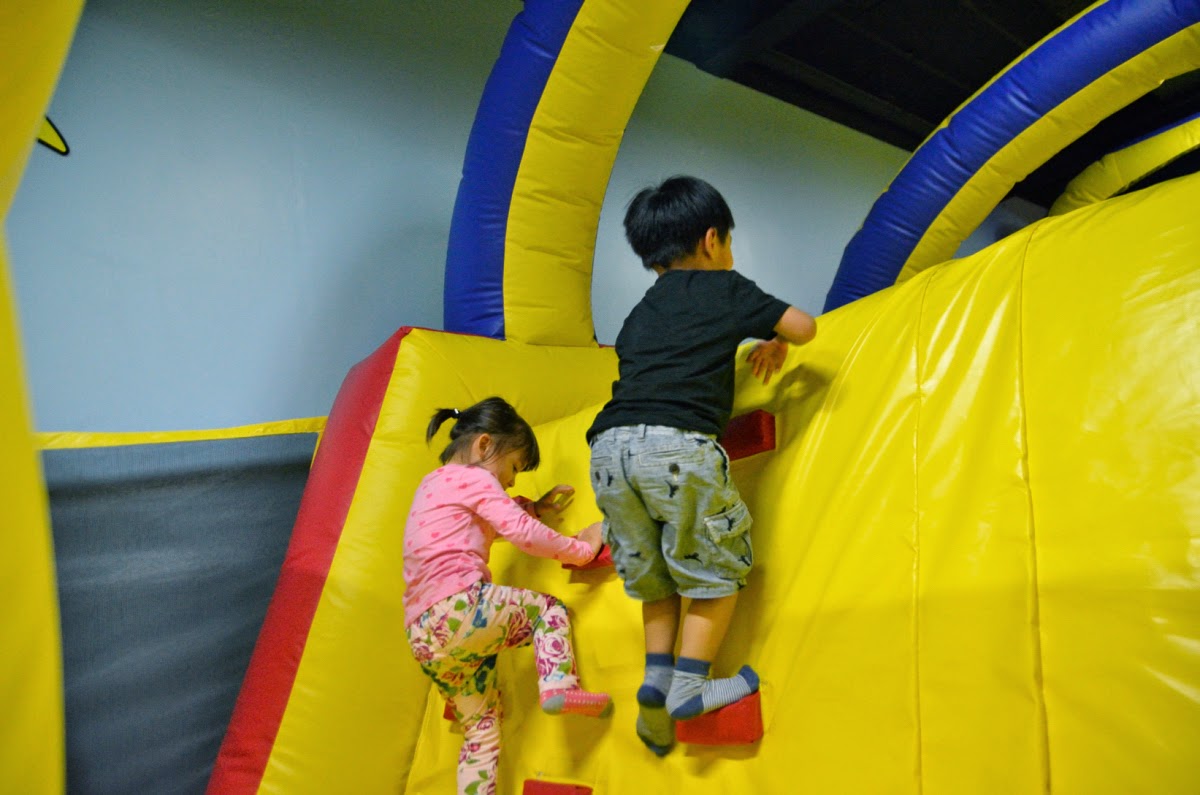 Urban Playground is filled with humongous bouncy inflatables that all of the children went nuts for. They romped, climbed, jumped, crawled, slid and whizzed about everywhere. It was close to impossible to take photos of Bubs because he just couldn't keep still for even 1 second. 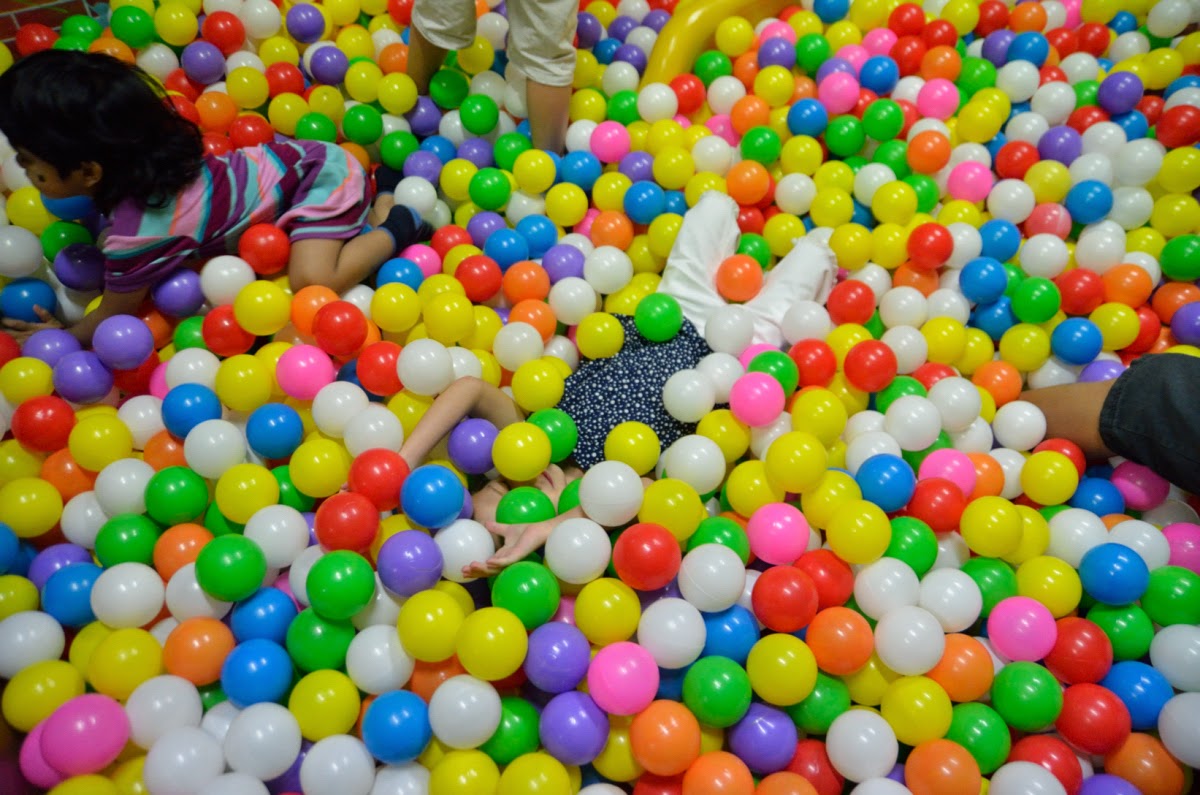 The ball pit was a massive favourite of everyone, from little toddlers to adults alike. It was like sleeping on a mound of soft bubbles that you could just roll around - I wish our office had something like this, it would be amazing to de-stress in there! 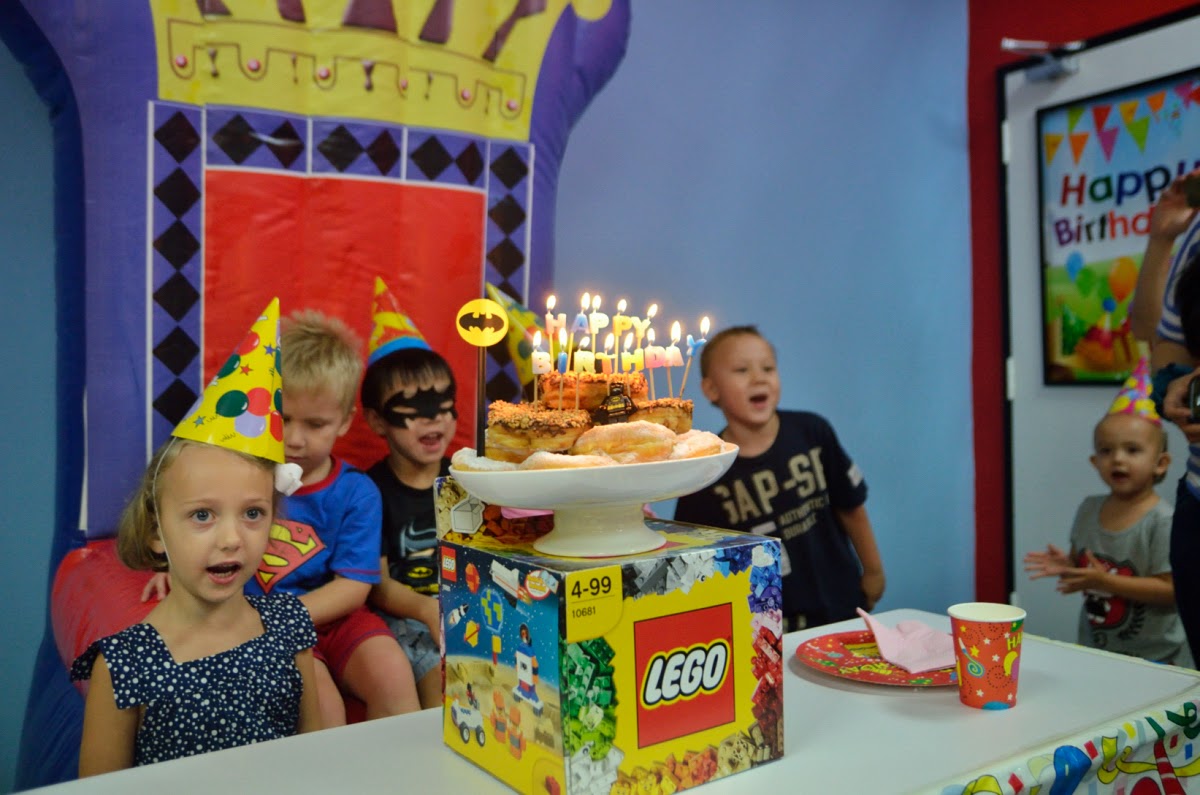 After an hour of frenzied play, everyone recharged with a quick meal and the birthday boy blew out the candles on his cake donuts. I cheated by figuring that candles and a Lego Batman on donuts counted as a cake. 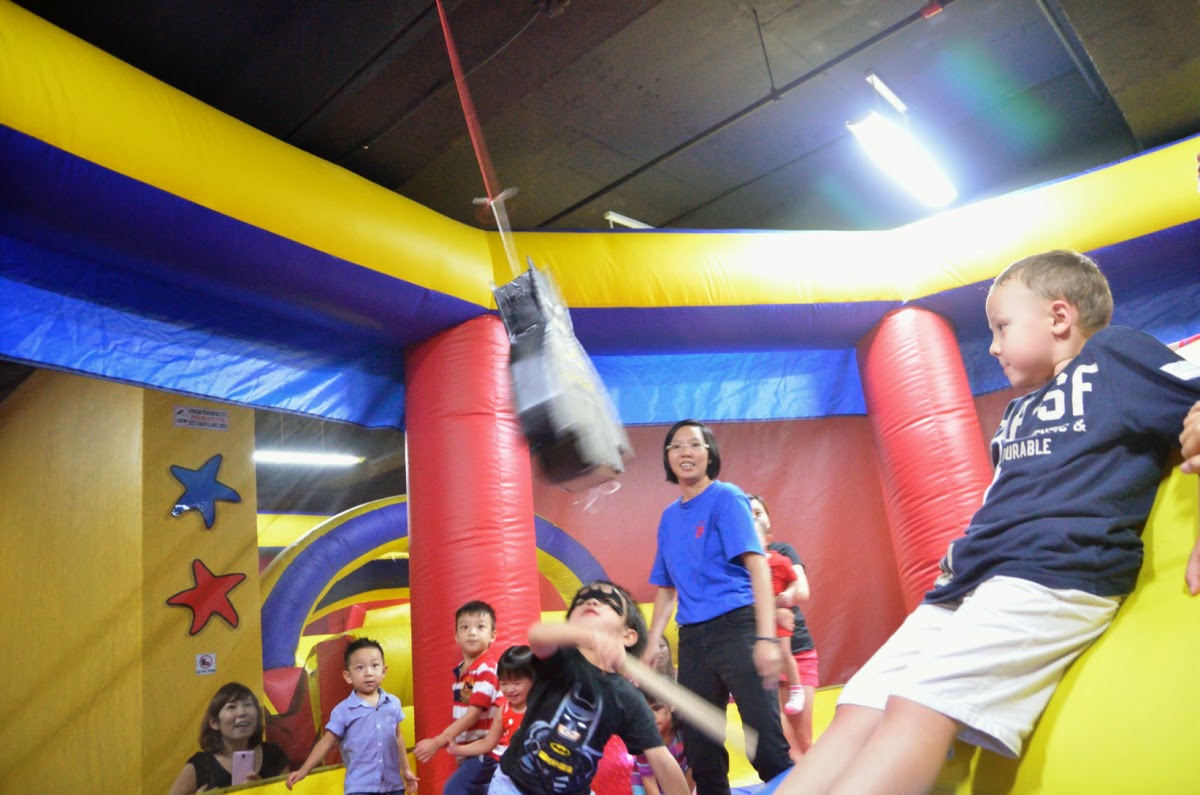 When it was time for the pinata, the staff helped set it up inside an inflatable enclosure. I felt that it was the best bit of the party and made the hours of effort that we put in to be well worth it. Bubs was given the first go and he was terrified of it for some reason. I persuaded him to give it a few tries which he gamely did :) A few of the older boys tried as well but the pinata was too hard. It was hilarious because each time someone jumped up to hit it, the whole floor would just wobble and everyone would lose their balance and tumble down together.

So I carried Bubs in my arms, we stretched up and untied the emergency trap door that Hubs cleverly designed at the bottom of the pinata and ... 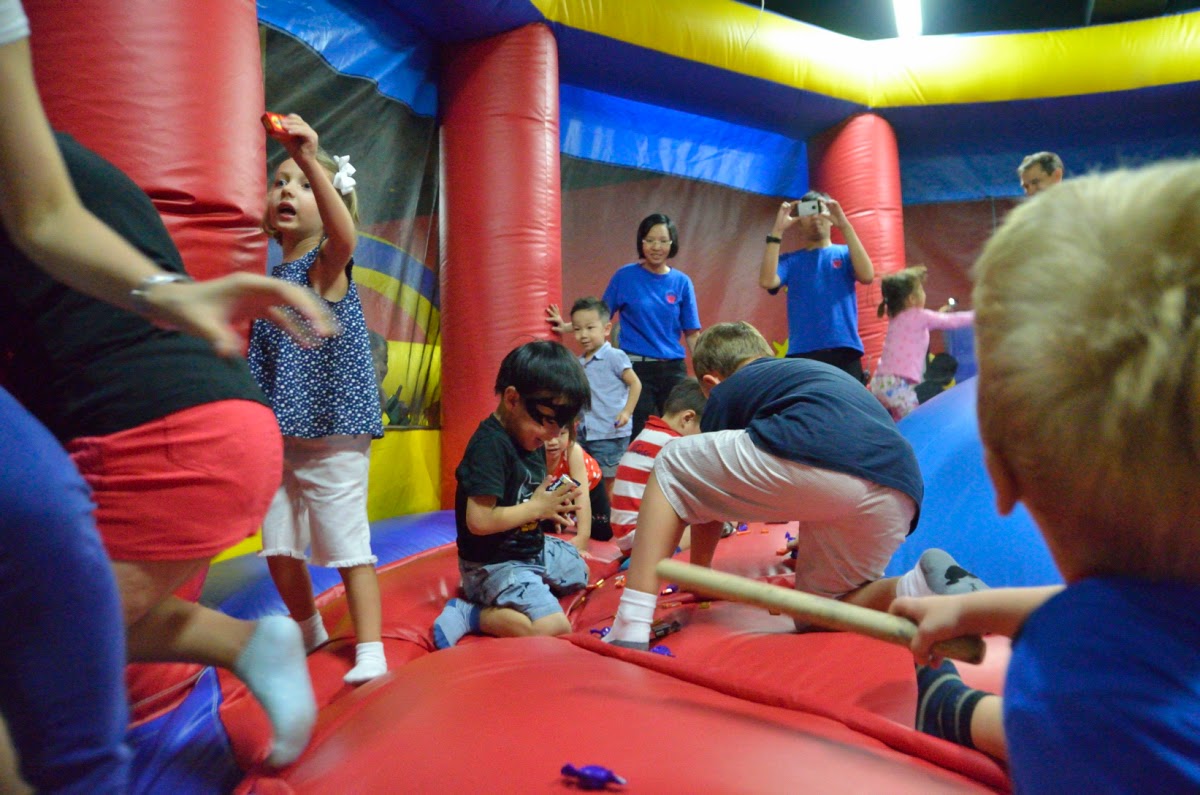 All the children were ferocious over the candies raining down! Being the cowardly mummy I am, I swiftly deposited Bubs back on the floor and bounced far away from them, LOL. It was pandemonium and I think everyone had a fair share of the loot. 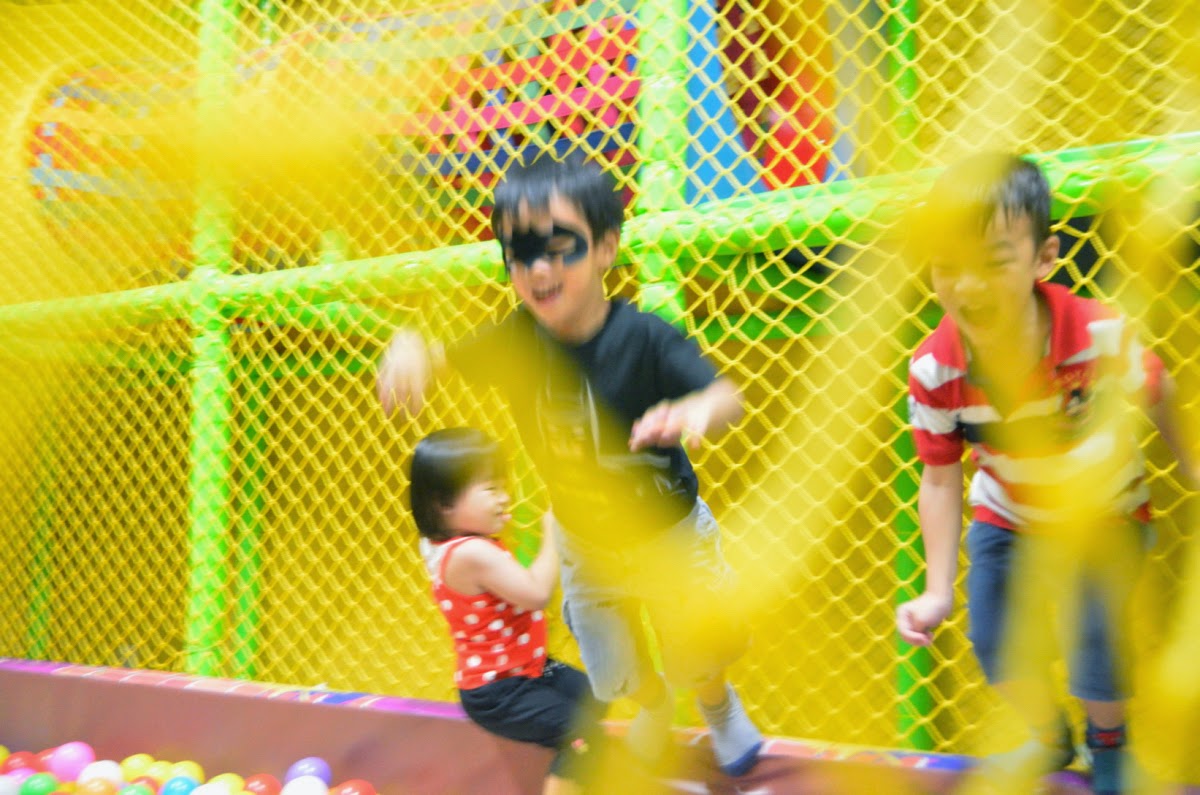 Fueled by sugar, everyone ran back again to the rest of the inflatables. Batman Bubs certainly had a ball of fun. 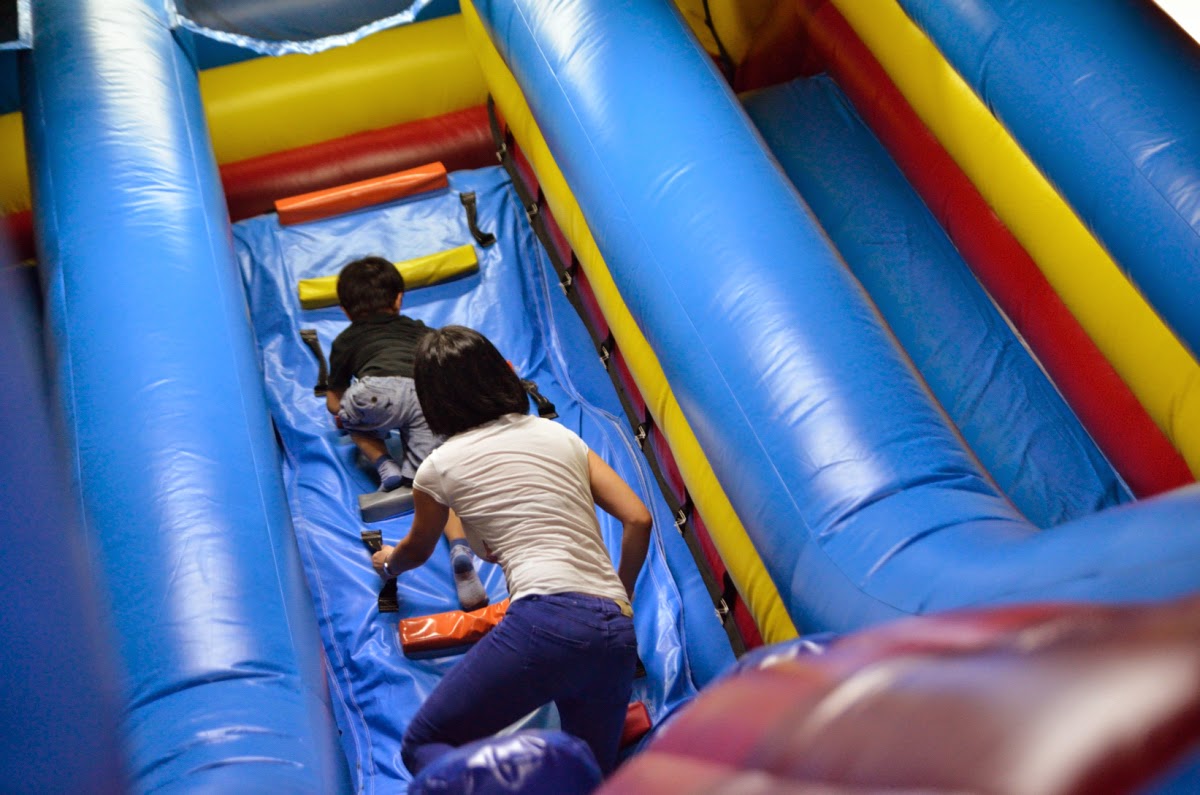 Hubs, Bubs and I had a pretty solid afternoon nap together after that party!