After reading this brilliant post about alphabet fish, I was inspired to try crafting a similar version of it. I went to Popular to buy cardstock and lo and behold - they had ready cut elephants! I weighed the pros and cons: to draw and cut out 25 fishies so I could tell Bubs that we're "fishing" or to just get the elephants and come out with some kind of story line? 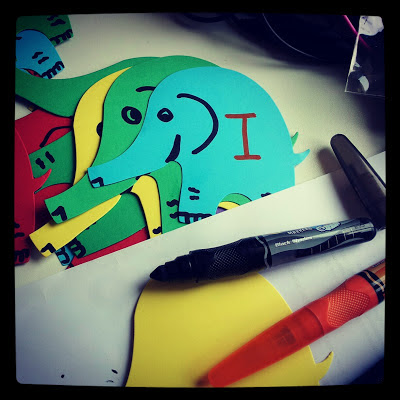 Guess which route I took? ;)

Hubs, who is good at drawing and everything I'm not, drew in the little details onto one elephant for me and I used that as a blueprint for the rest. In case you're wondering, the little squiggles on the legs are the wrinkly knees which all elephants have. I insisted on this when Hubs was drawing the first elephant. And can I tell you how cool Crayola markers are? They don't dry out even though I haven't touched them in months, they dry really fast and they don't bleed through the paper. 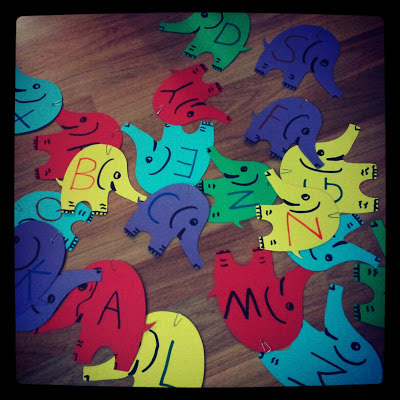 I hooked on metal paperclips and voila! A raging stampede of colourful alphabet elephants. By the way, the elephants are not smiling, those are their very ferocious tusks. 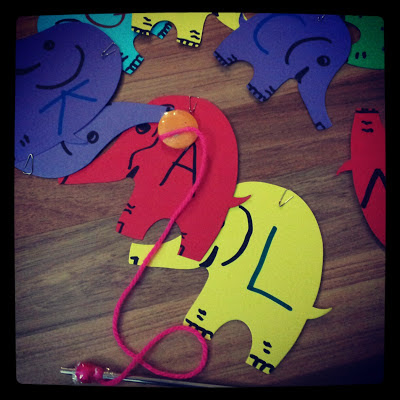 Tied a Daiso magnet with yarn to a chopstick. I couldn't exactly call it a fishing pole since there aren't any fish to catch. I was contemplating drawing a banana at the end of the chopstick and telling him that he had to feed the elephants until I thought what the heck, let's keep it simple. 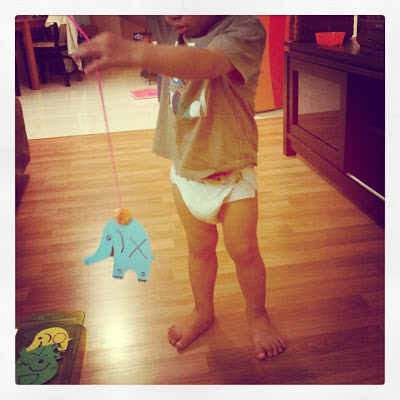 Bubs squealed "ally-fents" happily when he saw everything. I felt a little surge of self satisfaction that my artwork wasn't that bad since he could recognise what I was drawing :D I told him that he had to help the elephants cross a river to go home and showed him how to hook them on with the magnet. He was excited that he could call out the letters and this kept him occupied for quite a while.

A few notes: be careful when letting kids play with magnets, little paper clips and string. Oh and I found that for his little arms, the shorter the string, the easier it was for him to control the magnet.

PS - check out how cool is this mini magnetic fish set!
Posted by The Nonya at 9:17 AM