Hop On Hop Off and Kith & Kin

Bubs and his bestie recently went on the Hop On Hop Off bus and Hubs and I were soooo excited to tag along with his bestie's mum! For Malaysian IC holders, tickets are RM19 for a 24hr pass valid for both the town and beach circuit. Children under 5 get to board for free. The routes were so convenient and well planned with the city and beach interchange hub centralised just outside Gurney Plaza. 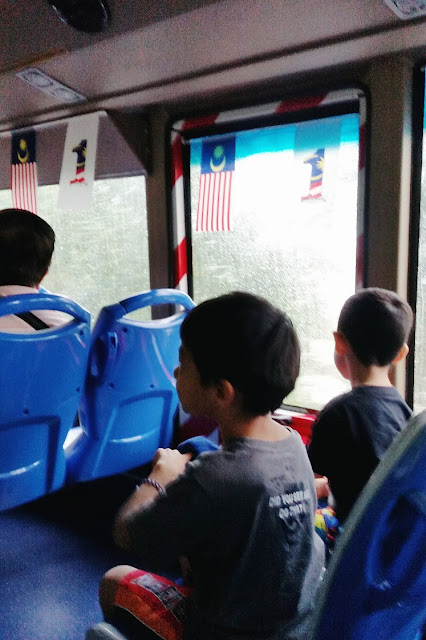 It was raining heavily that morning so Bubs and his bestie were cooped up inside the covered portion of the top deck. That didn't dampen their spirits though, they had so much fun peering out from the windows and chattering non stop. 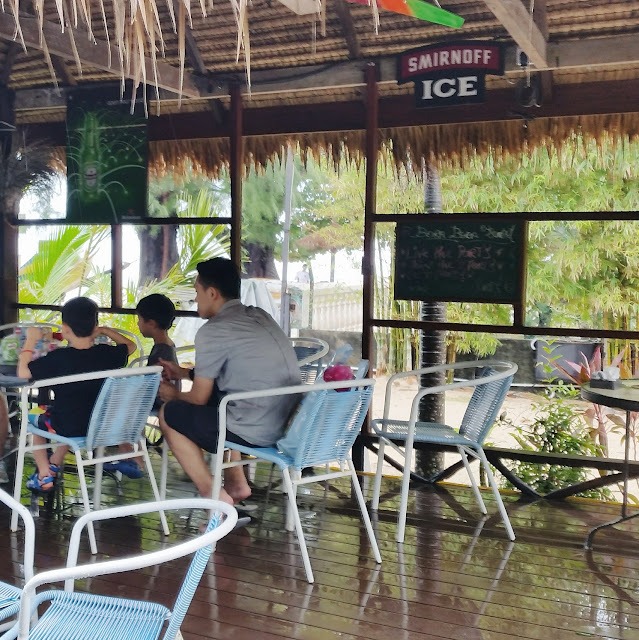 The rain let up just before lunch time so we hopped off at the Holiday Inn hotel stop for the two of them to burn off their energy at the beach. Bora Bora coffee shop has some tiny huts right on the beach and they didn't seem to mind us having a quick picnic there. 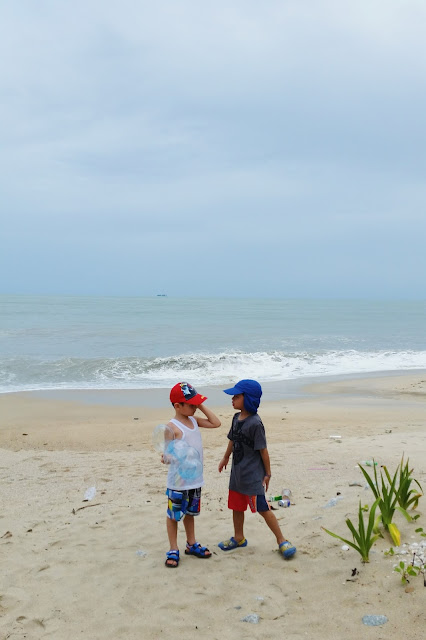 We took a walk along the shore. Both boys were upset that it was too muddy to play in the sand so Hubs blew some old school bubbles (the type that comes in a tube and lasts for ages) for them. That kept them happily occupied as they skipped and hopped. 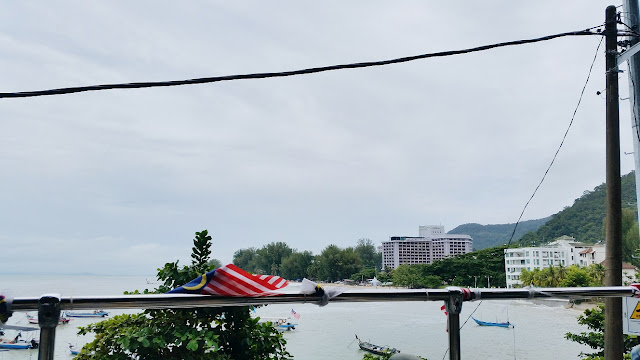 The sky was so much clearer so we were able to sit in the open air deck. Bubs and his bestie really enjoyed it and for safety reasons, we separated the both of them. It was a lovely ride and exhilarating whenever we saw low hanging tree branches come close to us. "Duck!" the boys would yell as we quickly bend down to avoid being smacked in the face. 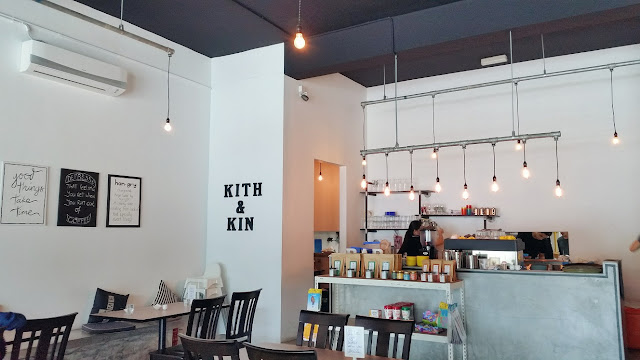 By this time around, we were starving and decided to take a bite at Kith & Kin, a chic and very family-friendly restaurant at Vantage Desiran Tanjung, Tanjung Tokong. For Penangites, it's the new-ish shop lots just next to Tesco Sungai Pinang with ample free parking. 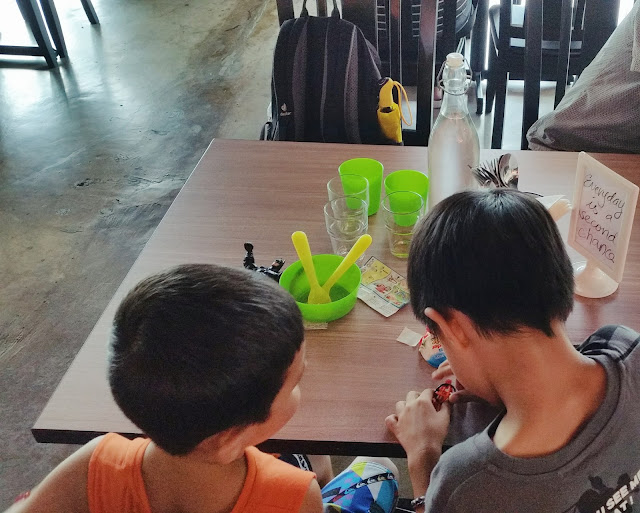 The two of them were as thick as thieves and thoroughly enjoying their day. 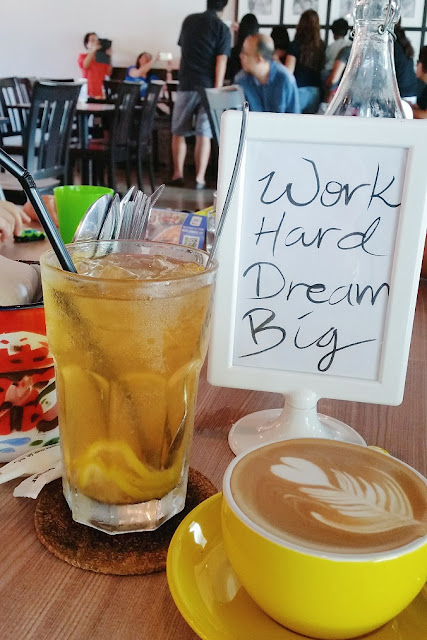 You can add RM6 to upgrade your mains into a set which will come with an iced lemon tea, soup and ice cream. 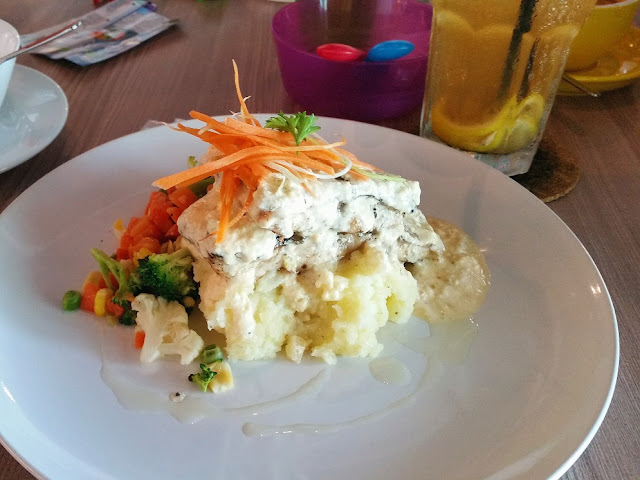 I'd the salted egg barramundi (RM19.90) and loved the unsual flavour of the creamy salted egg sauce with the soft fish fillet on top of a potato mash. The flavours were very light and you could tell that no MSG was used. I did feel that the side veg was a little kiddy-like: carrots/peas/corns. Bubs wolfed most of this down. 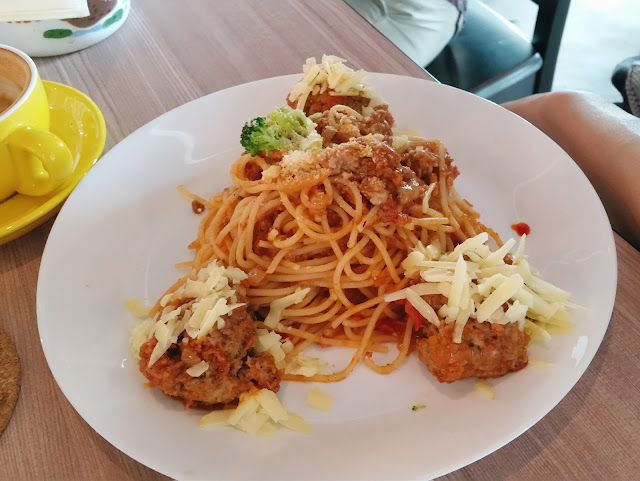 Hub's choice was the spaghetti with meatballs (RM16.90) and again, I felt that the food was geared towards children. It was decent, the meatballs were more of shaped mince and the sauce not over powering at all. 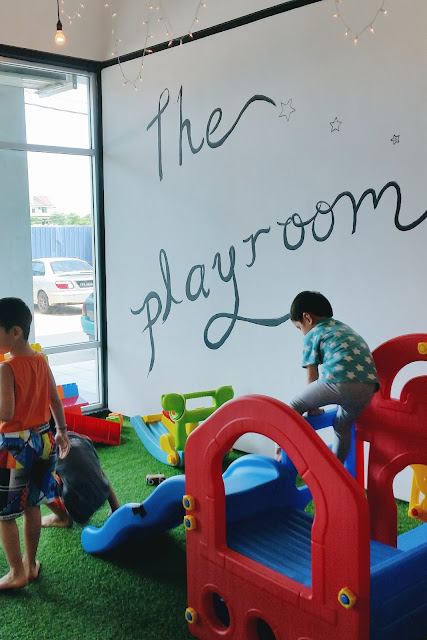 The playroom was the highlight of the restaurant with all the children rushing to it the moment they polished off their food. It looked so inviting, I was tempted to sit there with my shoes off to relax too.