Buoyed by Bub's interest in feeding and interacting with goats, we headed off to the Audi Dream Farm which is also located in Balik Pulau. There's an entrance fee of RM7 per adult and RM3 for children but this farm is a lot bigger with more livestock ranging from pigeons to fish. Visitors can opt to buy food to feed the animals: rabbits, fish and chickens. It was relatively empty on a weekday and the owner mentioned that on weekends, they have pesticide-free veggies for sale. 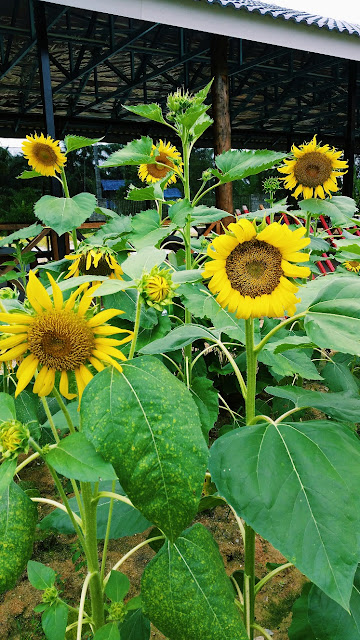 We were greeted by the cheery sight of sunflowers taller than Bubs. 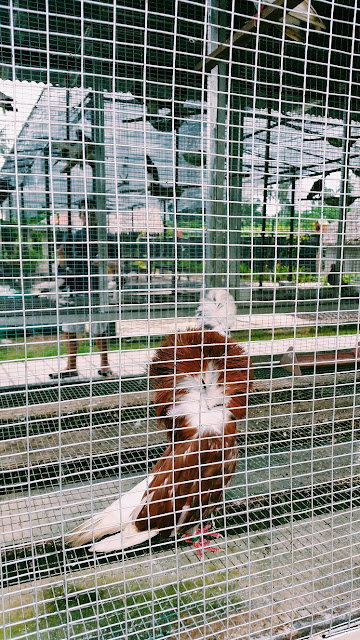 No idea what kind of pigeons these winged creatures are but they were rocking some cool plumage ;) We found that the pigeons weren't all that impressed with the bird food so after a few more curious stares, we hot footed over to some more receptive birds. 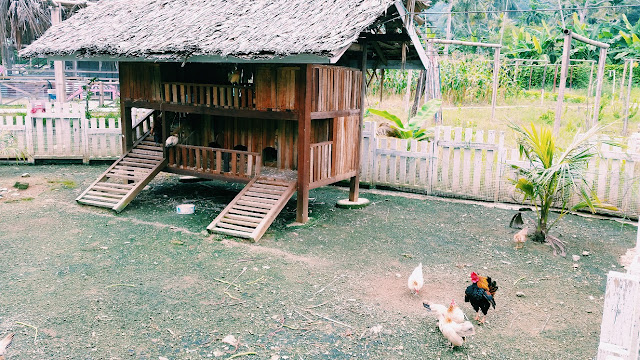 Ta-daaa, a real life chicken coop! The owner mentioned that they currently sell their eggs on weekends for 60 cents a piece but as demand is greater than supply, they're constantly sold out. Bubs had fun flinging the bird food across and watching the hens scratch for it. 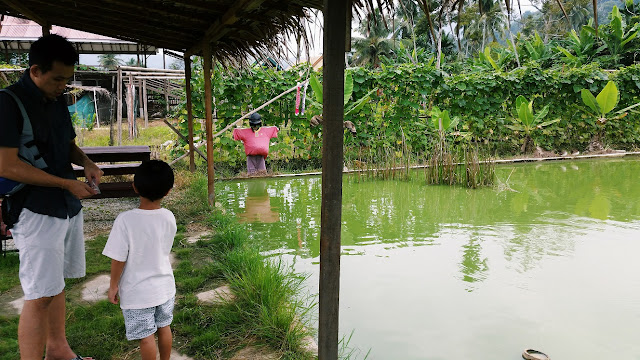 Bubs then tried replicating it at the fish pond but he ended up scaring most of them away in the murky pond. Hubs showed him how to lure the fishes to the edge by gently throwing a few fish pellets at a time and pretty soon, we could spot some orange-y ones peering out curiously for more. 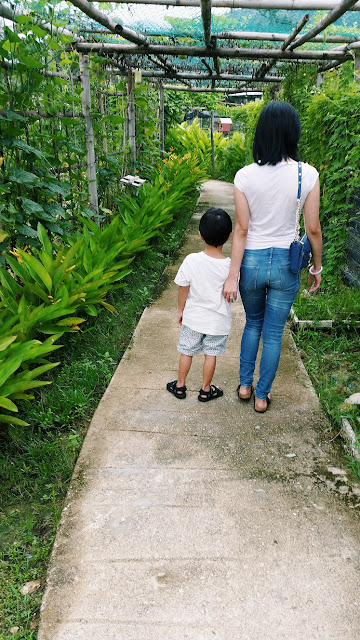 For some reason or possibly a blessing in disguise, Bubs doesn't attract bugs as much as me so he's fine in shorts but I need long pants each time I meet Mother Nature. 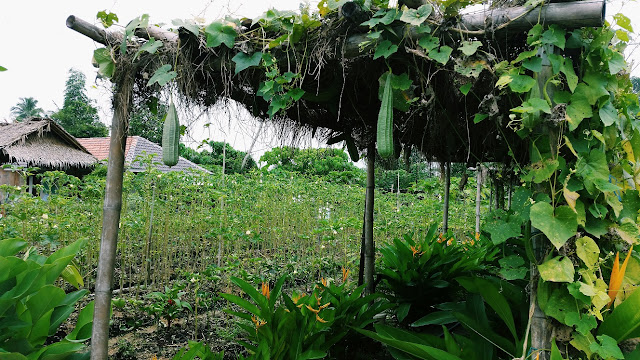 The farm is filled with many picturesque spots with many veggies patches in neat rows. Every inch of space is fully utilised, such as this walkway draped with gourds growing down. This does mean that there are heaps of insects (I got bitten by red ants, ouch!) so mossie repellent is a must here. 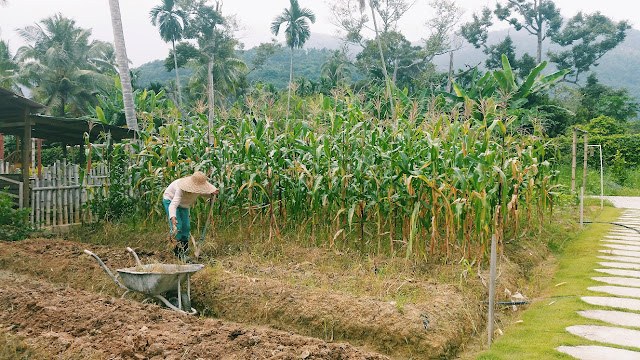 This was a scene common in Penang during the 80s: a farmer hard at work tending to his tall, leafy stalks of corn with coconut fronds in the background. 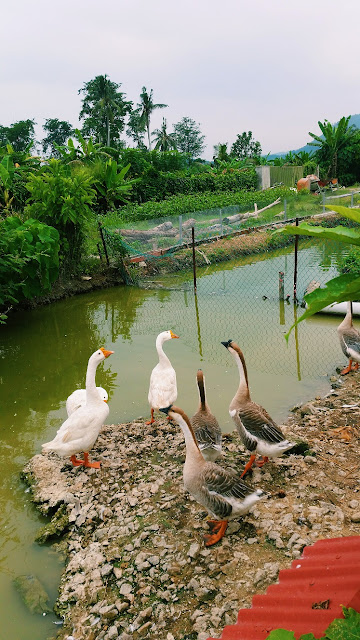 Ok, I feel incredibly dumb. I didn't know which were ducks and which were geese. I thought ducks were supposed to be way smaller and more sedate looking, kind of like yellow rubby duckie but these were the same size as the geese and LOUD. I couldn't tell if they were quacking or honking. 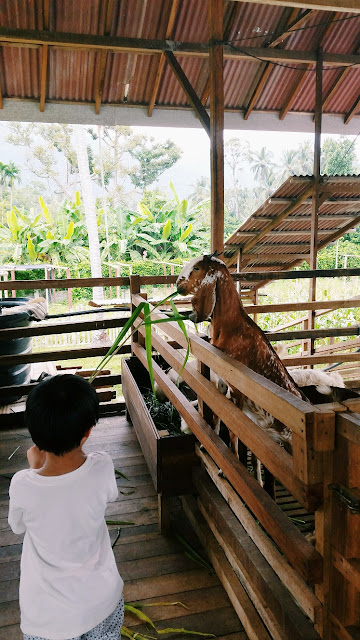 More goats in a shed at which Bubs was now a pro at feeding them. There was a massive supply of fresh grass for visitors to feed them with though be very careful, the bottom of the stalks have needle fine thorns on them which got embedded in both Bub's and my fingers. Boy, did that hurt! "Pricklessss!" Bubs cried out. 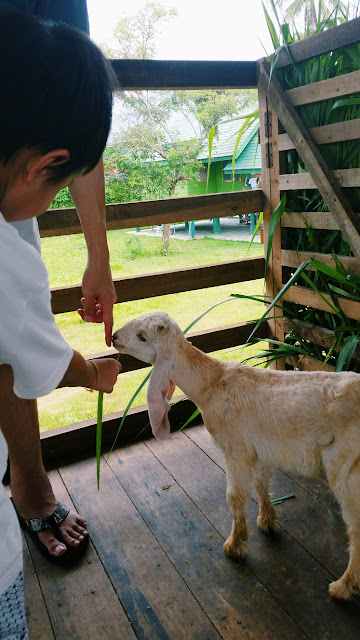 There was a lone goat kid wandering around that was very tame. 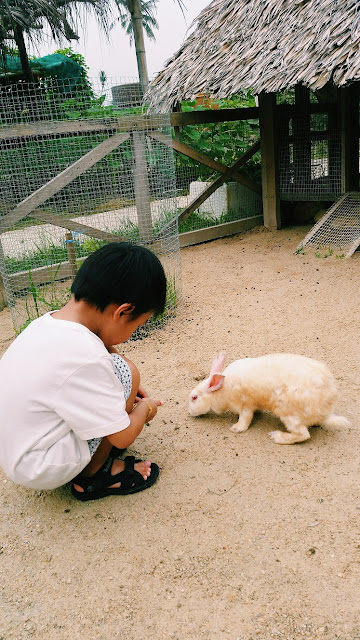 Bub's favourite part of the day: feeding the bunnies which was ironic because his school has rabbits and I'd never seen him that interested in them before. A case of the rabbits are always fluffier on the other side? ;)

Best to go early in the mornings when it's not too hot and the next time we're back, we'll definitely pick weekends so we can get some fresh veggies. They don't have too many at this farm for harvesting as it's geared towards being more of an education centre.