I'd to go to Bangkok for a work trip so figured that I could sneak in Hubs and Bubs into my luggage for a couple of nights ;) Even though we were there for 4 days, I'd meetings for half the time so we didn't get a lot of time to really go around for sight seeing so whenever we had little pockets of time, these were mainly spent at malls. 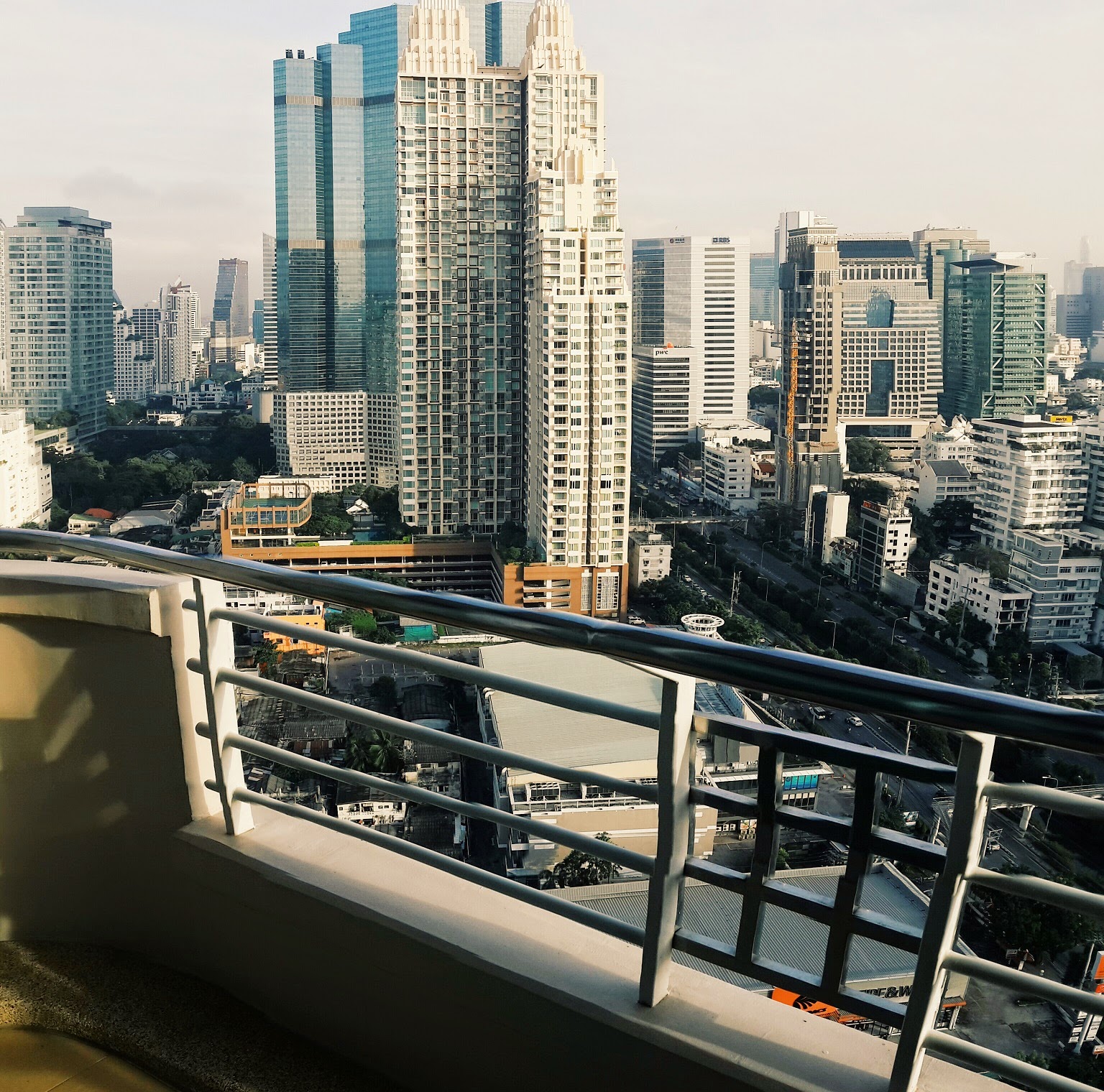 We stayed at the Anantara Sathorn and it was such a relaxing stay right in the middle of the bustling city. 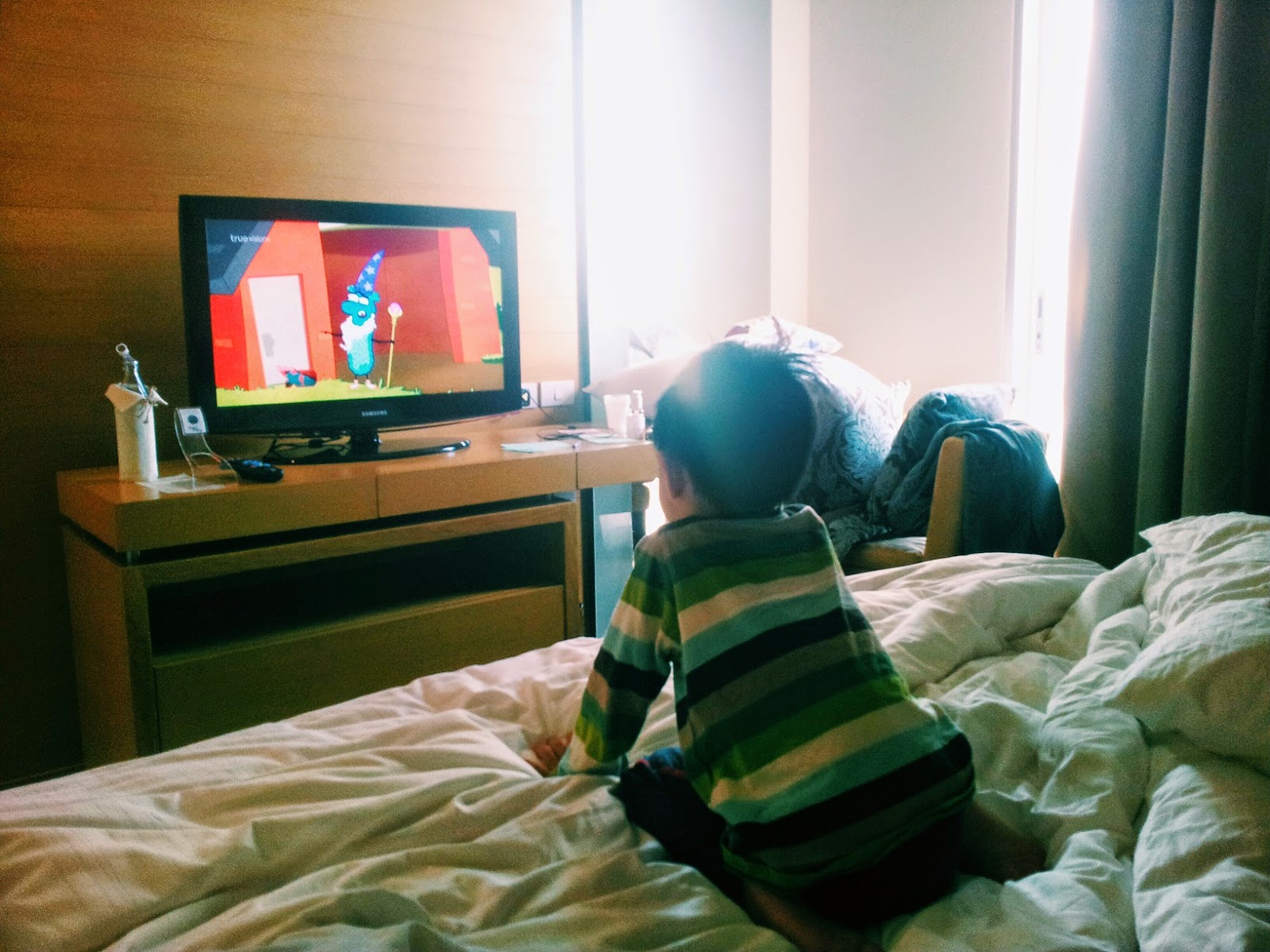 Bubs was more than fascinated with the huge TV that played the Cartoon Network 24x7 right in front of the king sized bed and happily plonked himself there for most of our stay.

We'd a full day before work started so we tried to cram everything we wanted to do on that day. We took the BTS to most of the places to avoid taking taxis - we almost always ended up with unscrupulous drivers that refused to use the meter (I guess the fatigued looks while lugging Bubs around gave away the fact that we were desperate). 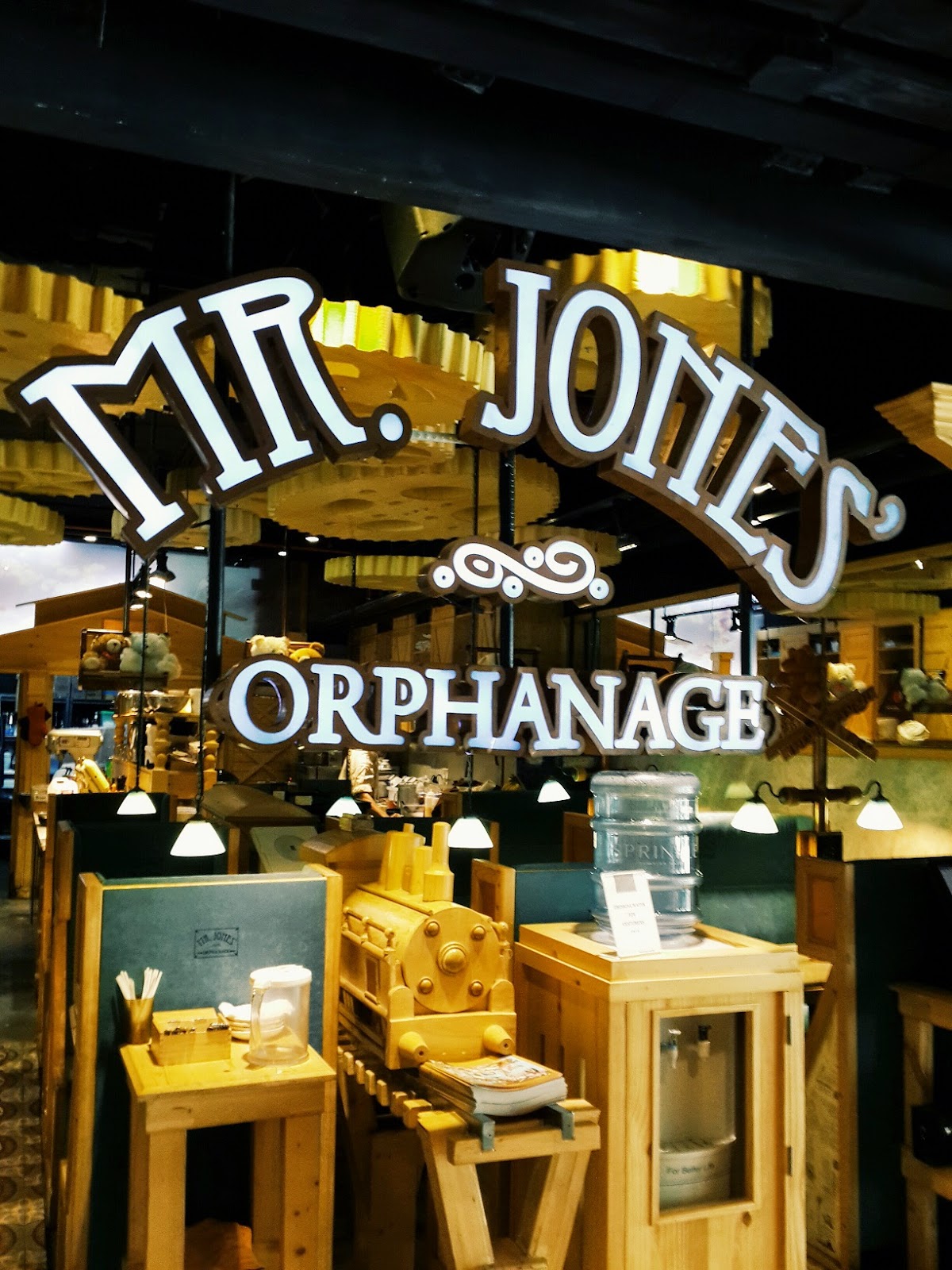 First up was dessert at Mr Jones' Orphanage at Siam Central. The name conjures up images of oppressed children dressed in black moping around. The truth couldn't be any further ... 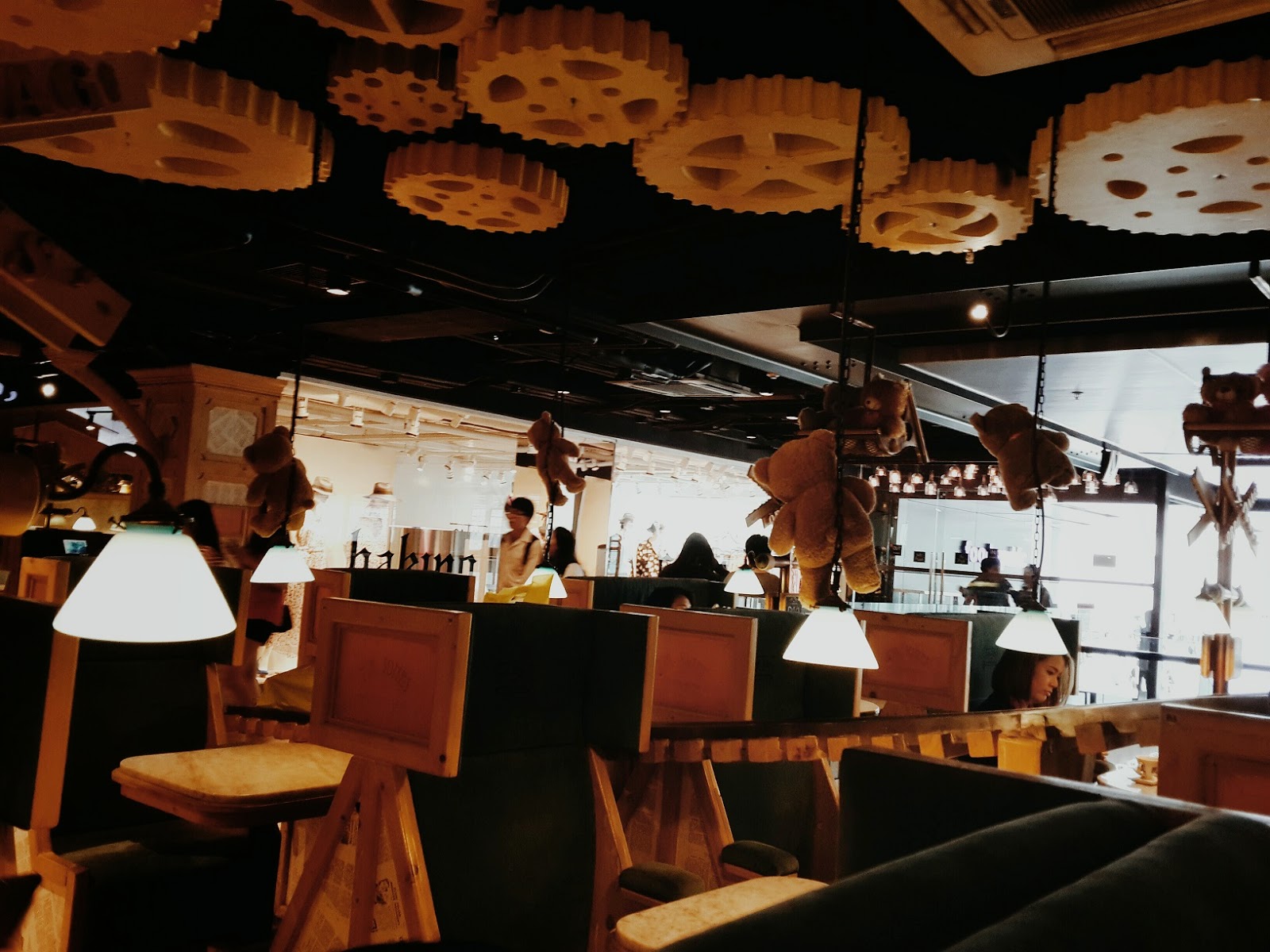 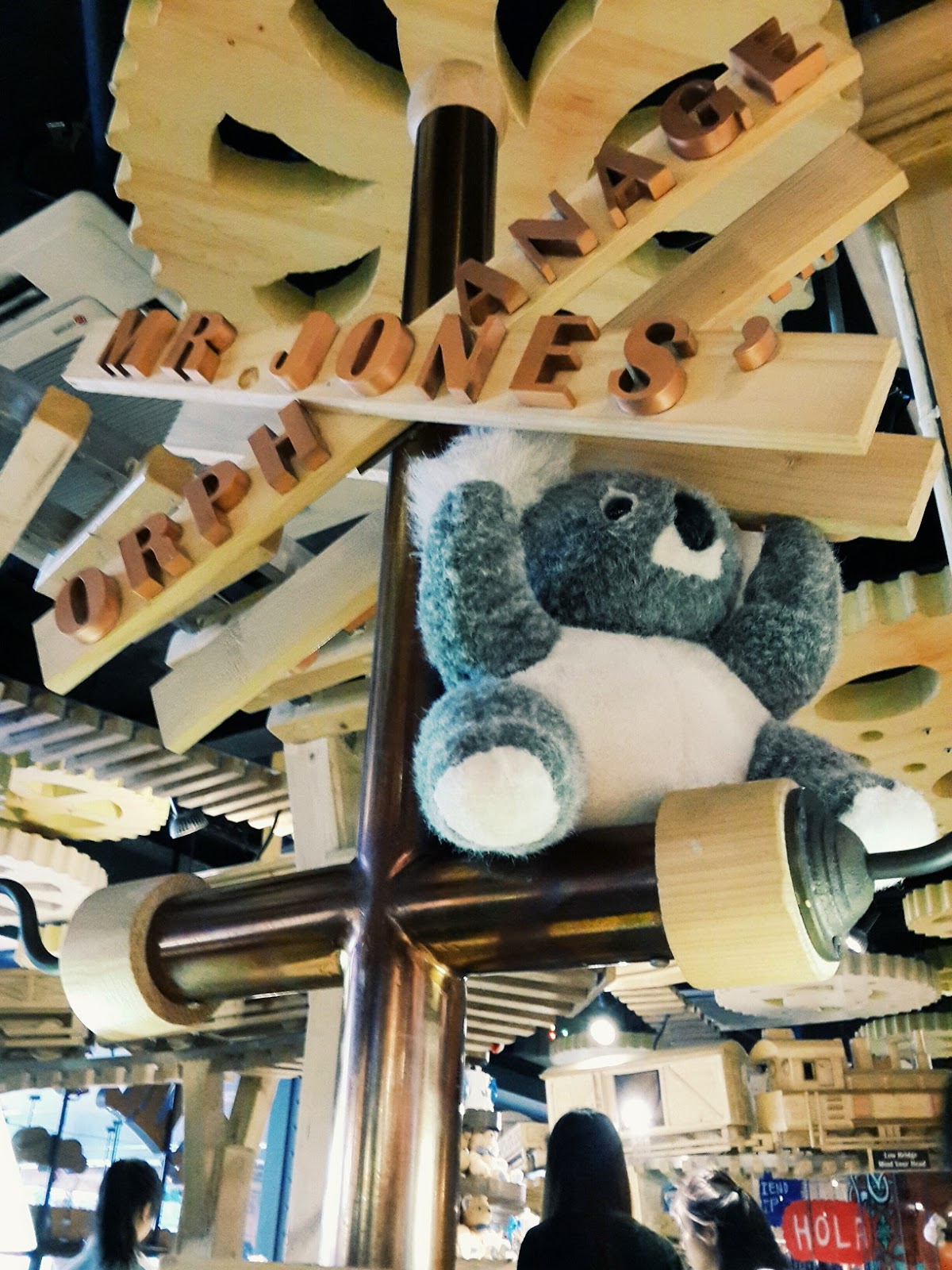 It was like having afternoon tea in a whimsical toyshop. Stuffed bears were perched across beams,  giant cogs and a train track stretched across the cafe; we couldn't stop staring in wonder. Be warned though that the wooden booths are slightly cramped and daddy long legs Hubs had to sit at an awkward angle. 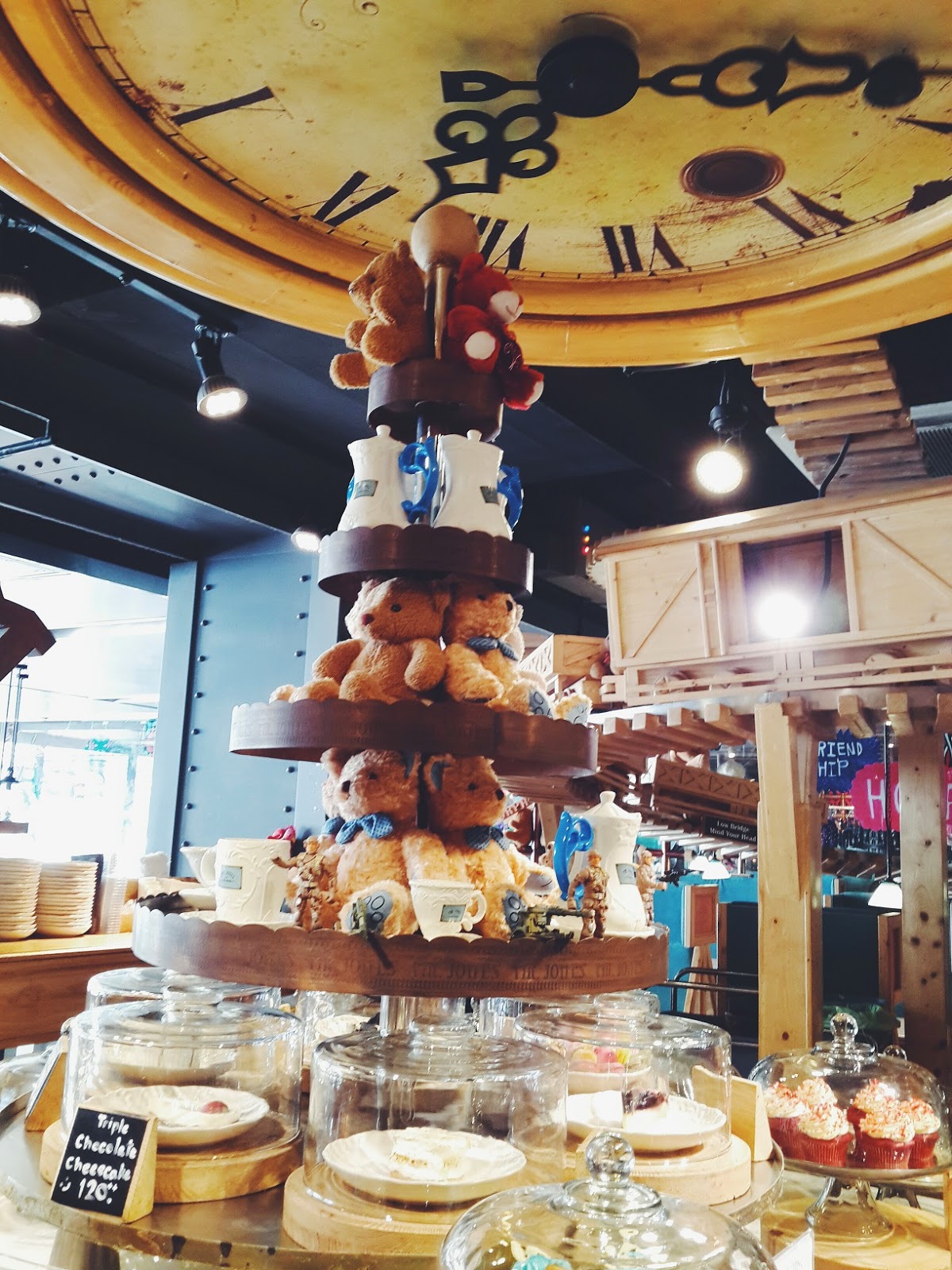 The cakes were reminiscent of the ones at China House and displayed so invitingly, Bubs found it impossible to pick just one. 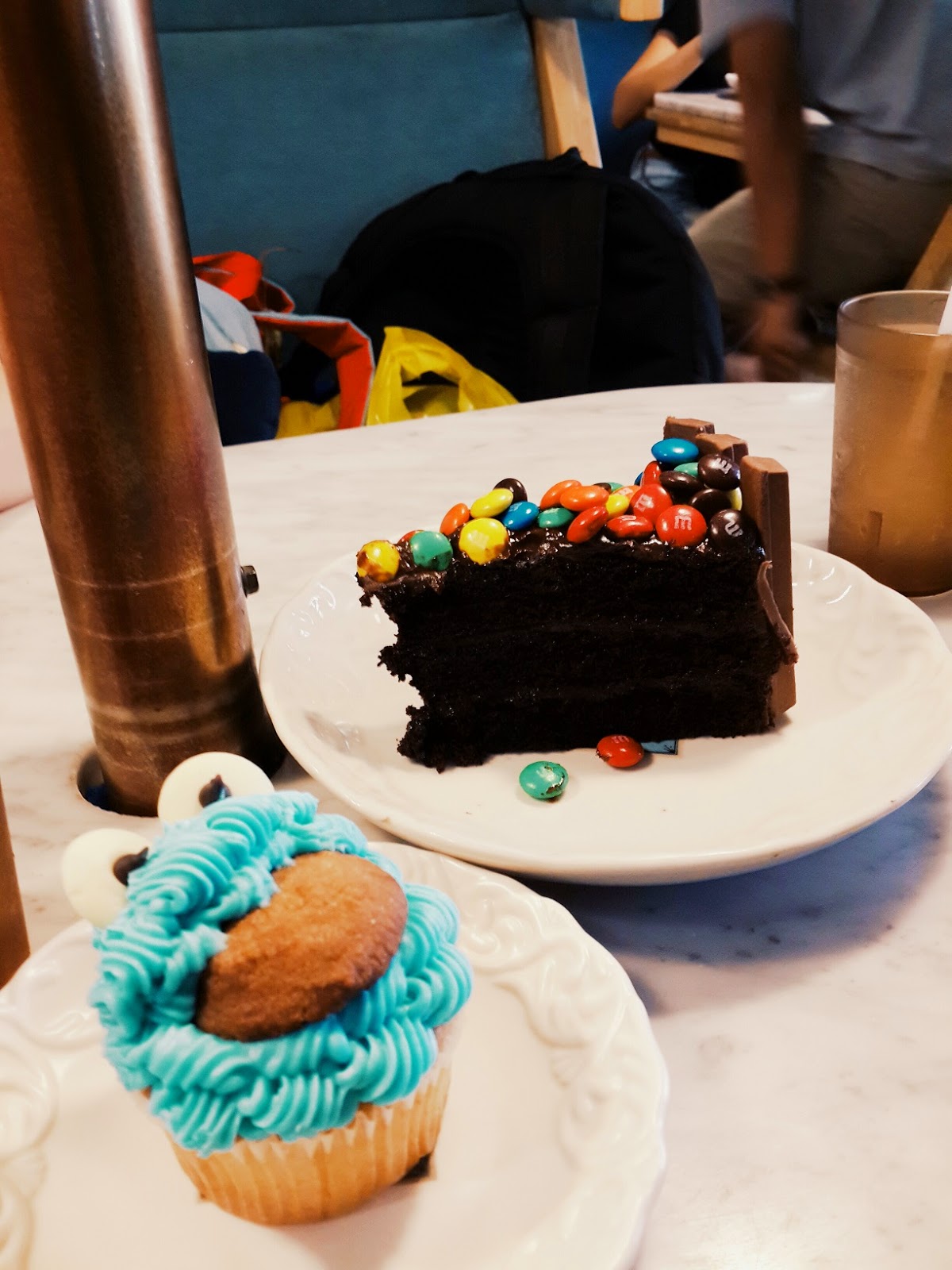 We narrowed down our choices to a Cookie Monster cupcake (who could say no to such a cutie?) and a wedge of sinful chocolate cake covered with M&Ms and Kit Kats. 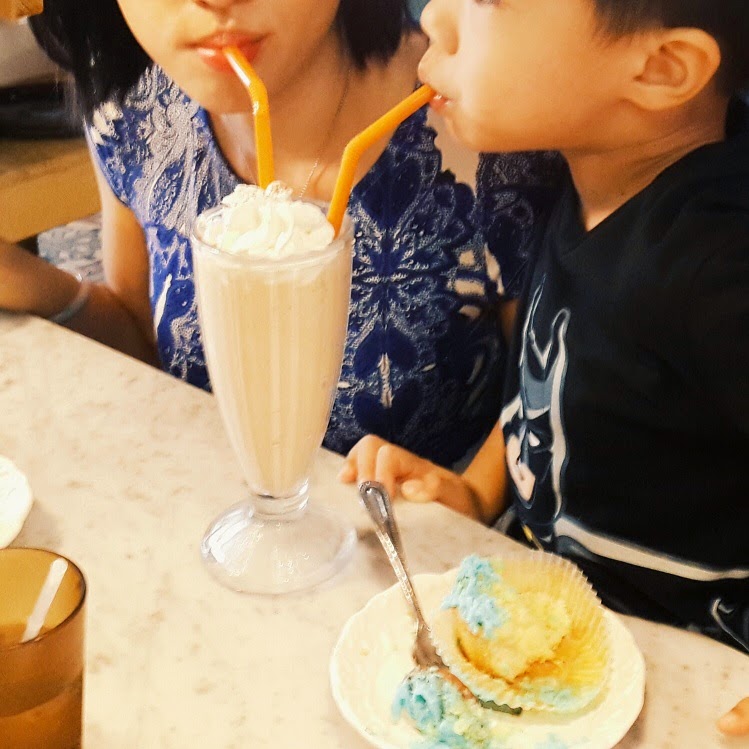 To ensure that all of us finished these on a sugar high, we topped it off with a chocolate peanut butter milkshake. 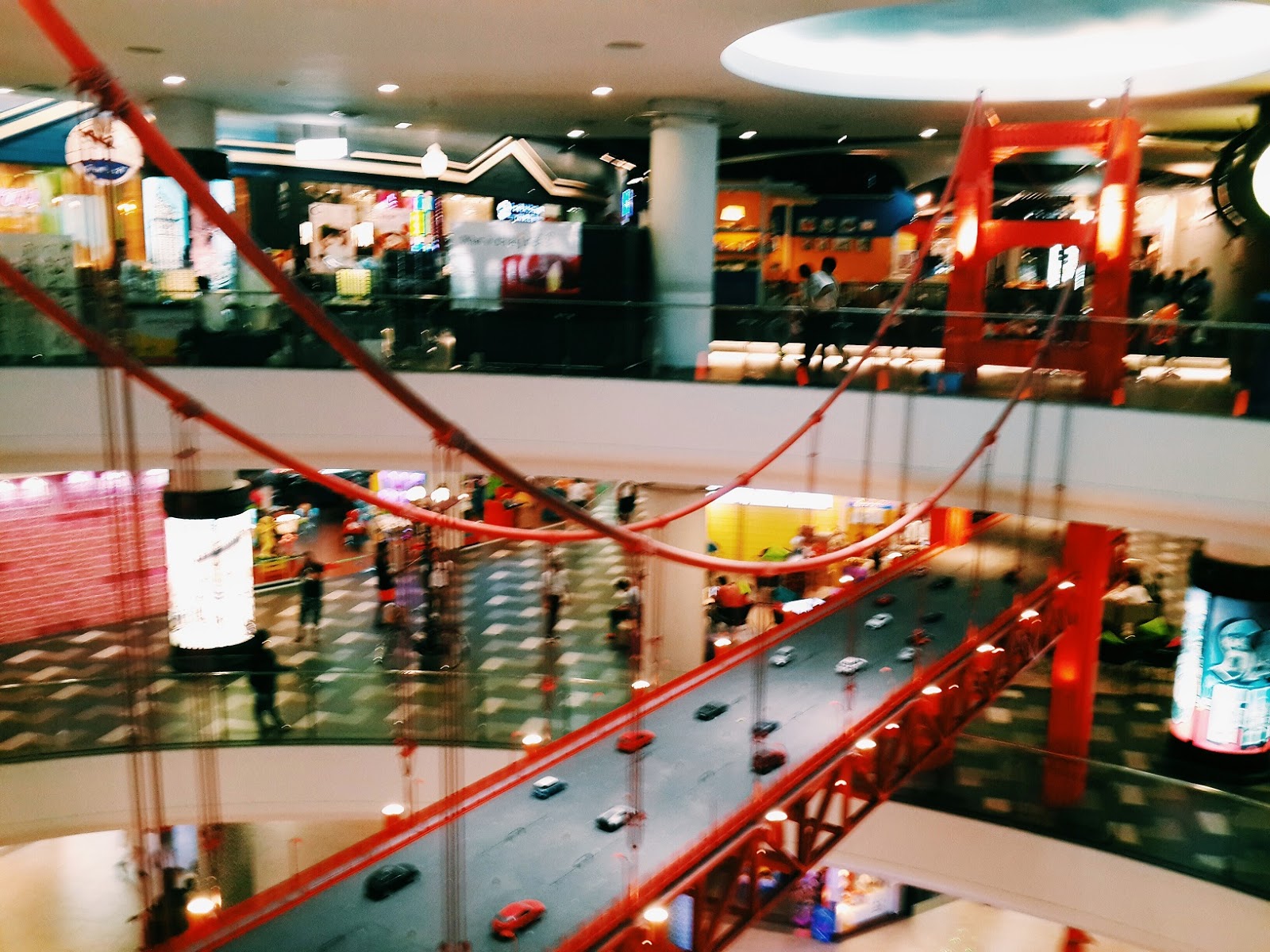 We walked around in a daze, onward to our next destination: Terminal 21. Each floor has a different country's theme. The food court had a San Francisco vibe going on. 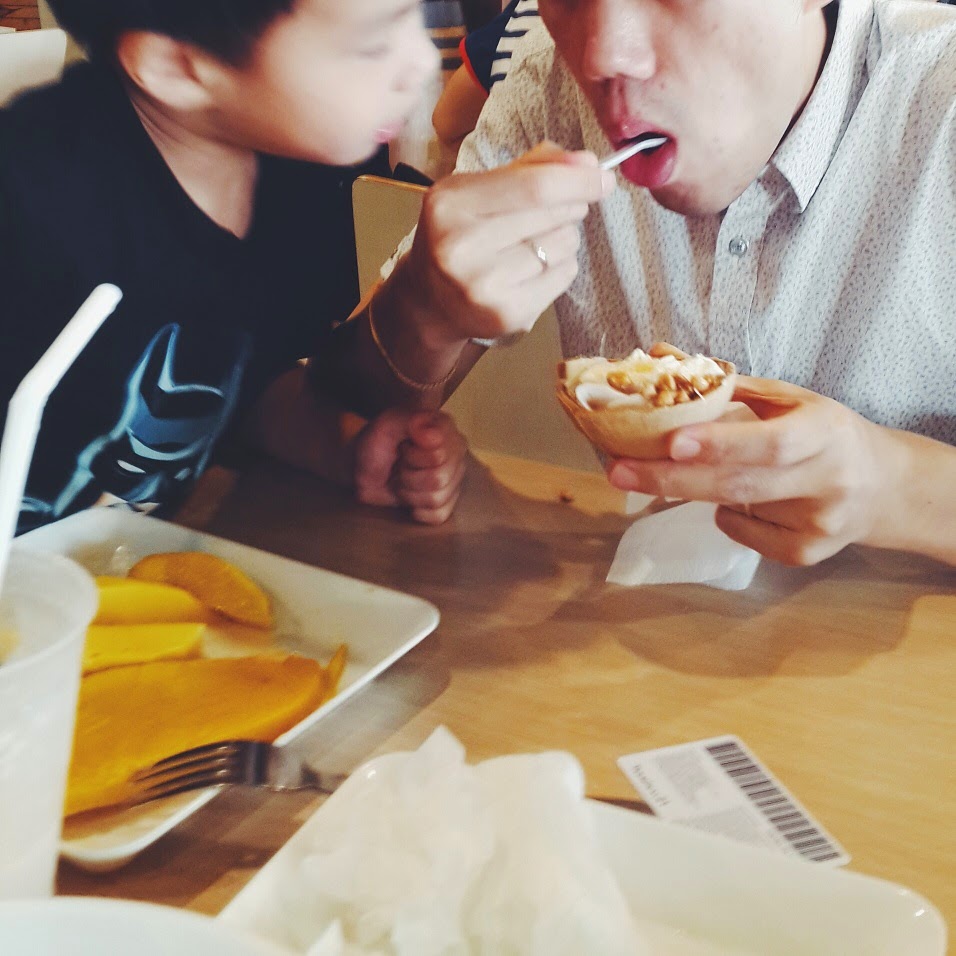 One of our goals for Bangkok was to eat as many coconut ice creams as we could. Unfortunately, they were out of coconut flavoured ice cream so this was plain ol' vanilla :( 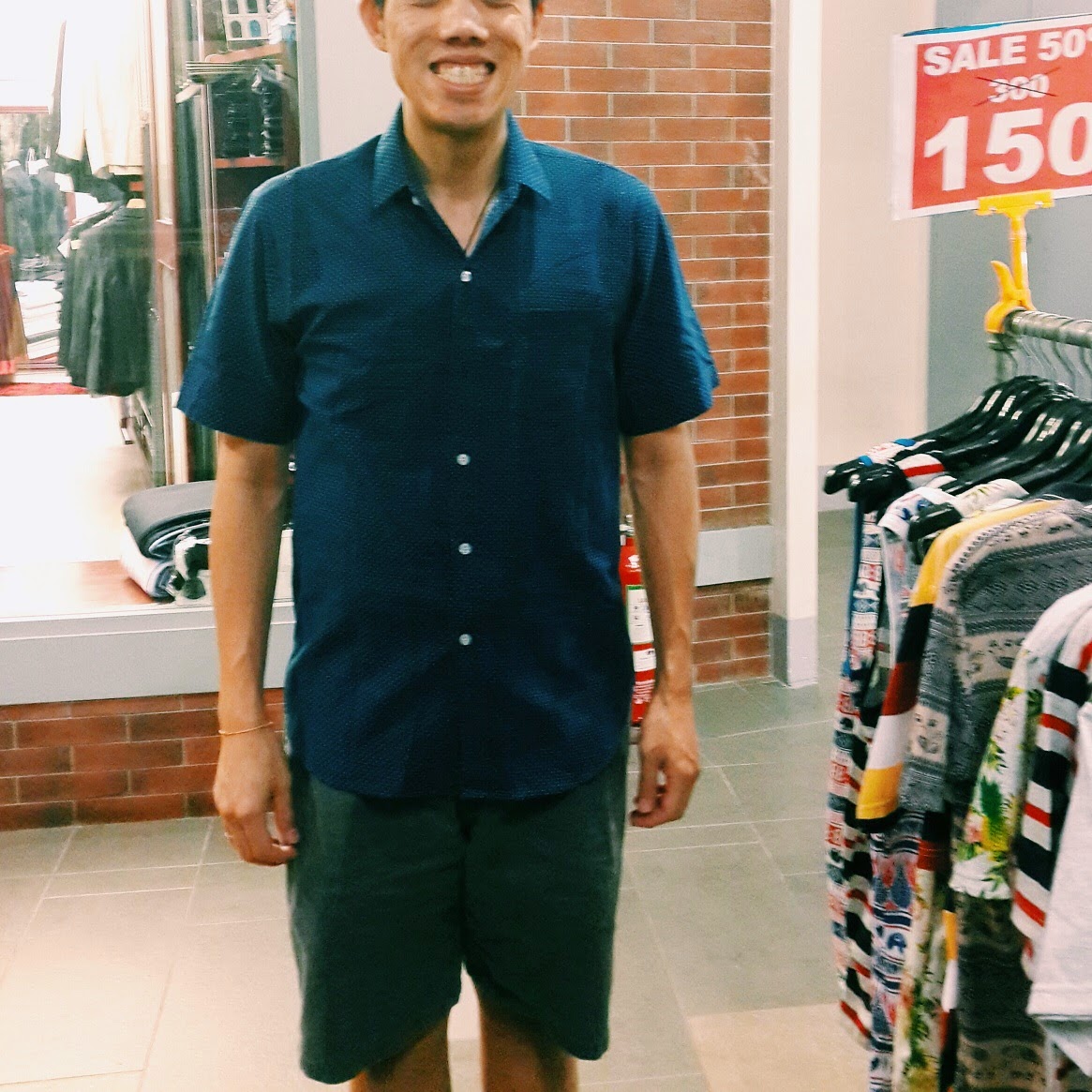 Hubs was elated he managed to find decent short sleeved shirts at 2 for 700 Thai Baht at the British floor. 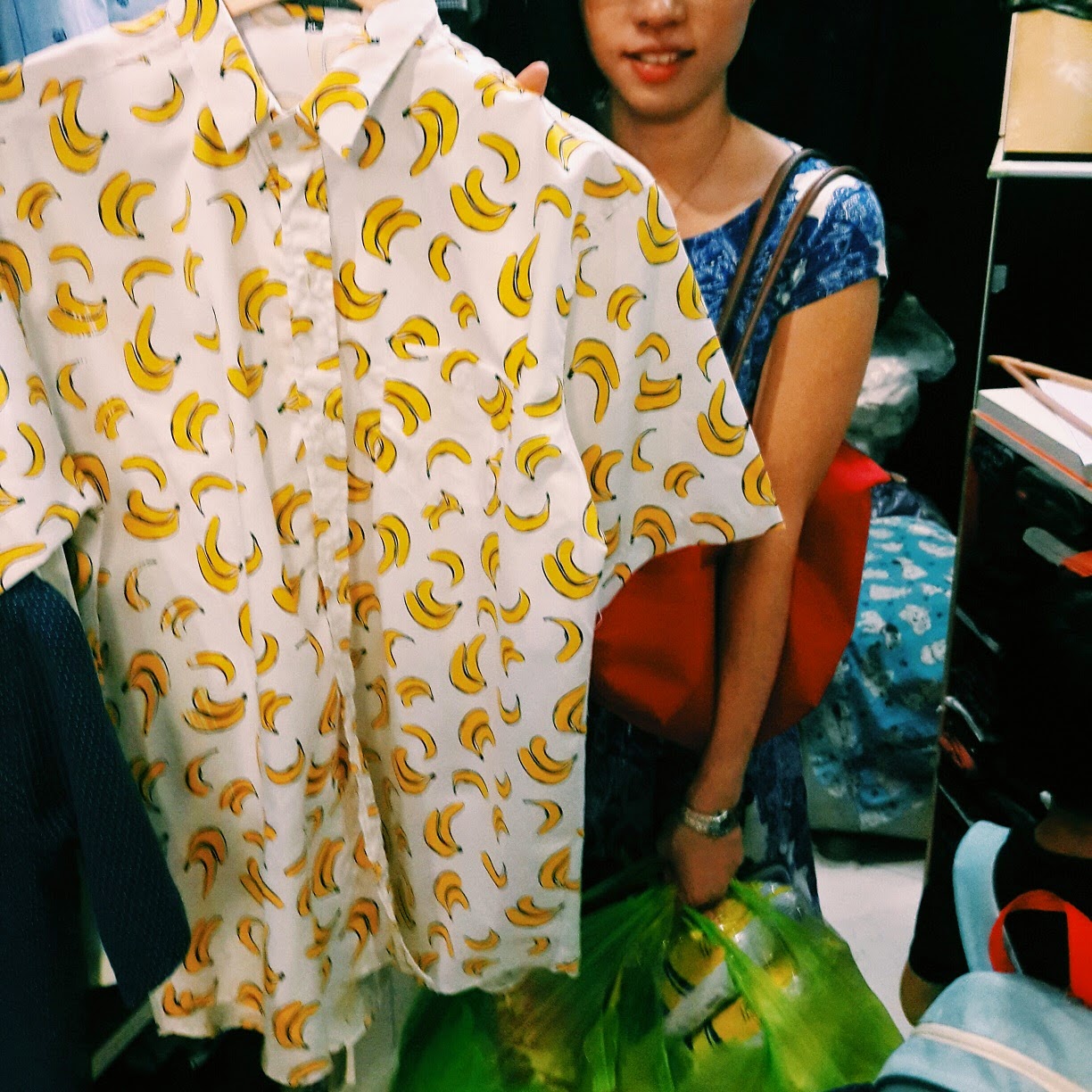 He rejected my help to pick more shirts for him ;)

Dinner was at Mix (Terminal 21, 5th floor right at the opposite end of the food court) , a Thai fusion restaurant that Suyin highly recommended. It was a little pricey and portions are smaller but at this point, we were bone tired so we wanted a nice and quiet place to just relax for a while. 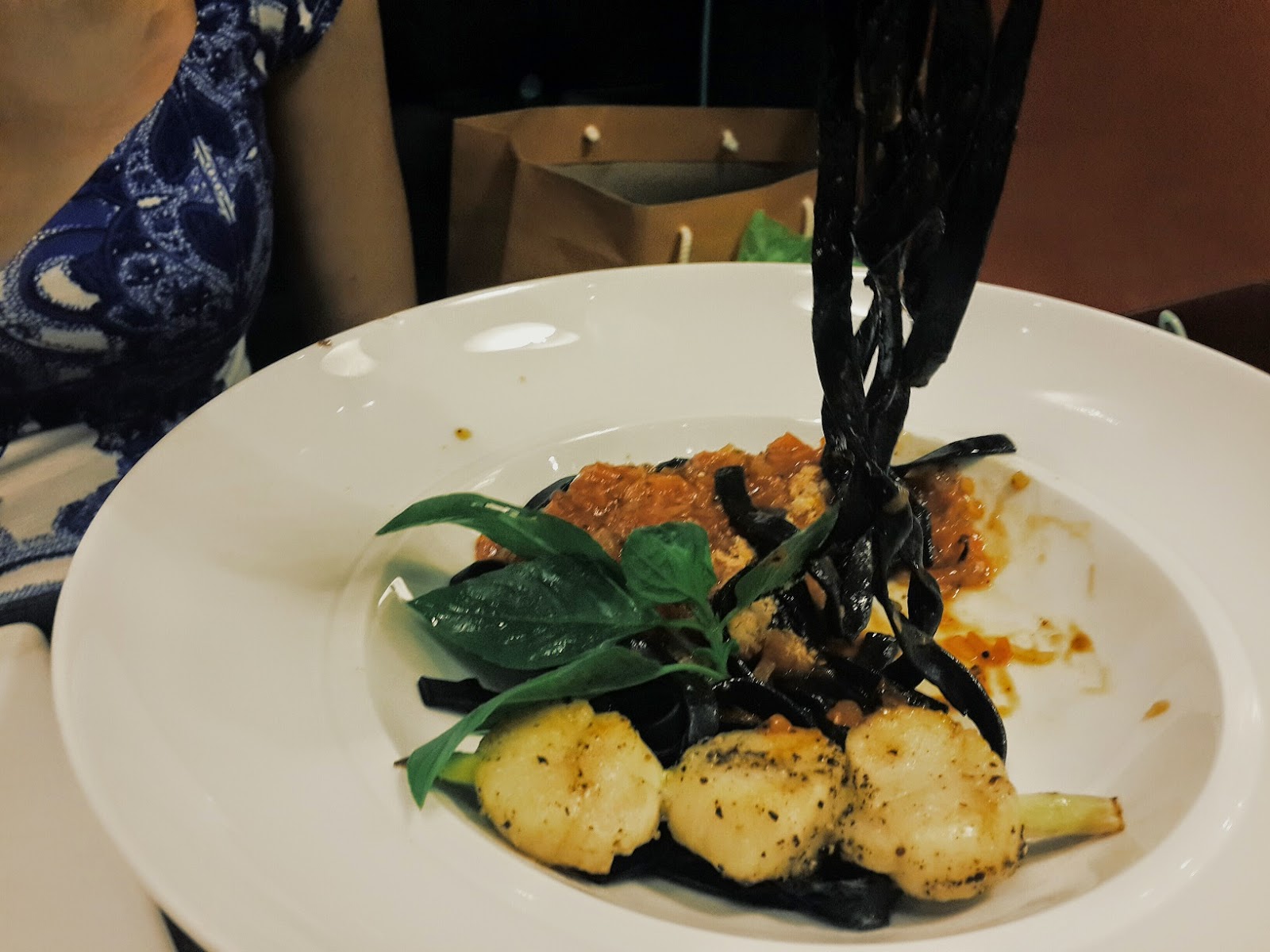 The squid ink pasta with fresh scallops was served with a yummy dollop of tomato based sauce and fresh basil sprig. 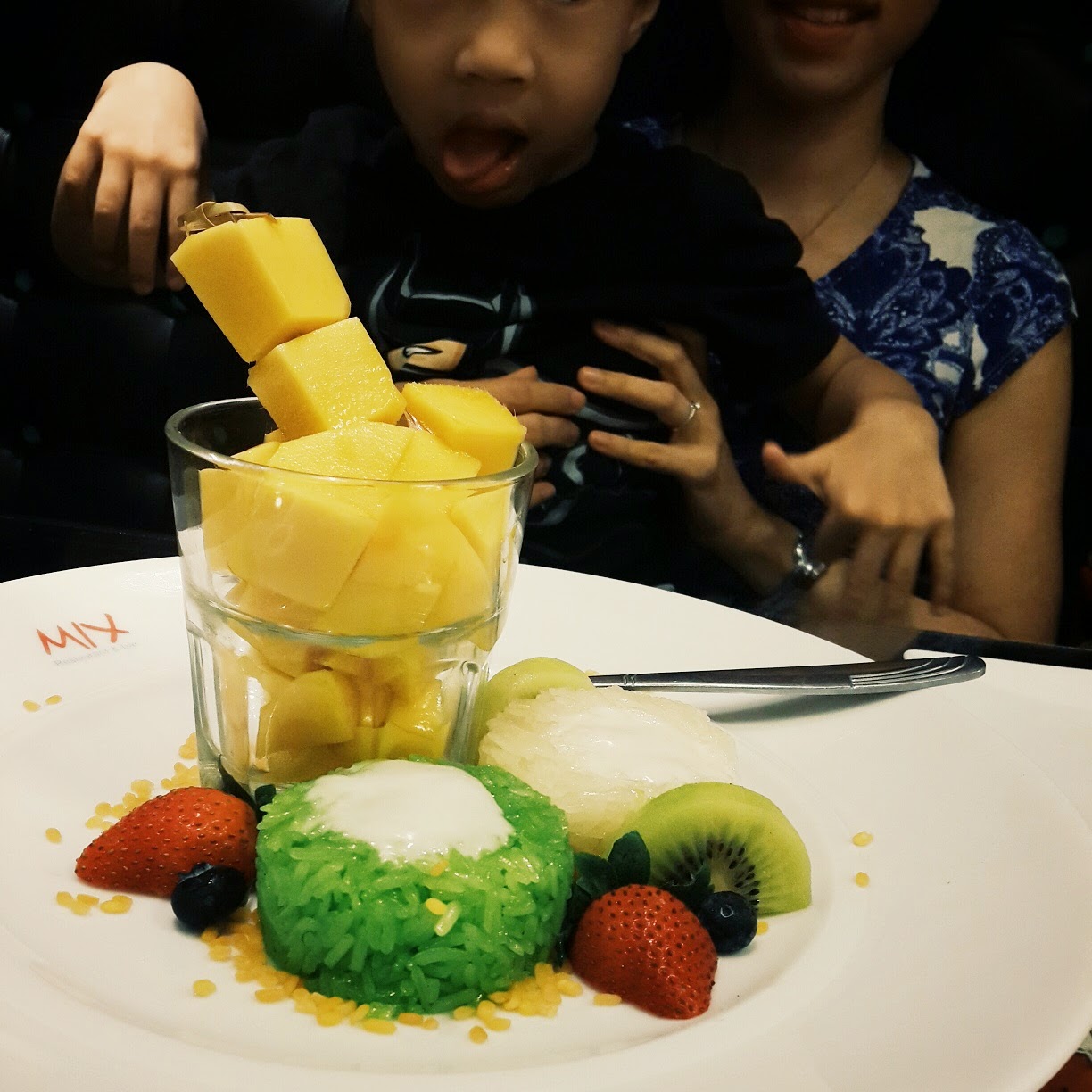 We ended our day by meeting our 2nd goal: mango sticky rice daily *slurps* The ones in Bangkok have a sprinkling of crunchy lentils that we just can't get enough of.
Posted by The Nonya at 9:50 AM