Whilst in KL, Fairy Godma gave me a looong list of dining options and I chose the one with the cutest name: Fat Spoon without knowing much about it ;) Fairy Godma and her friend were super kind enough to come pick us up for dinner. 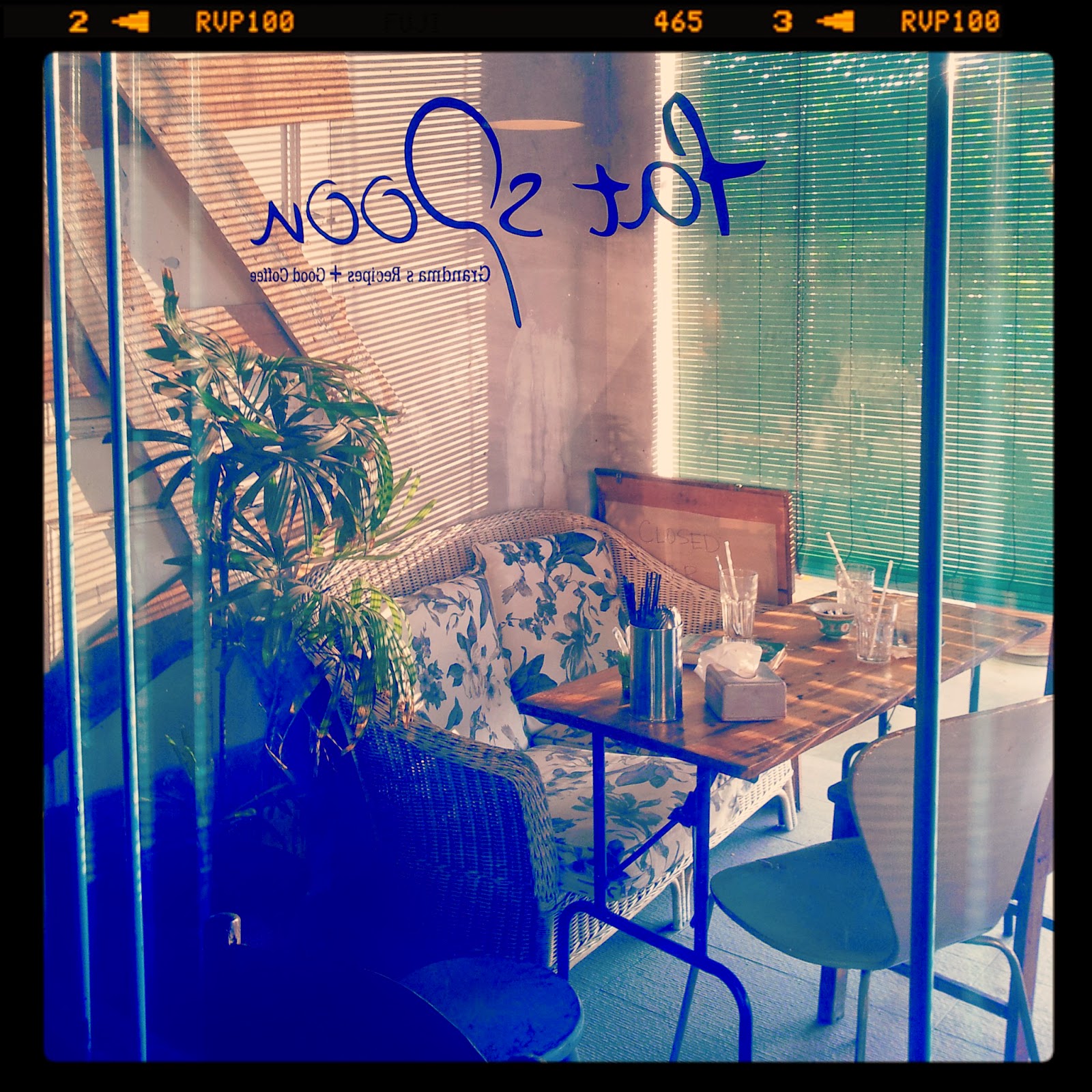 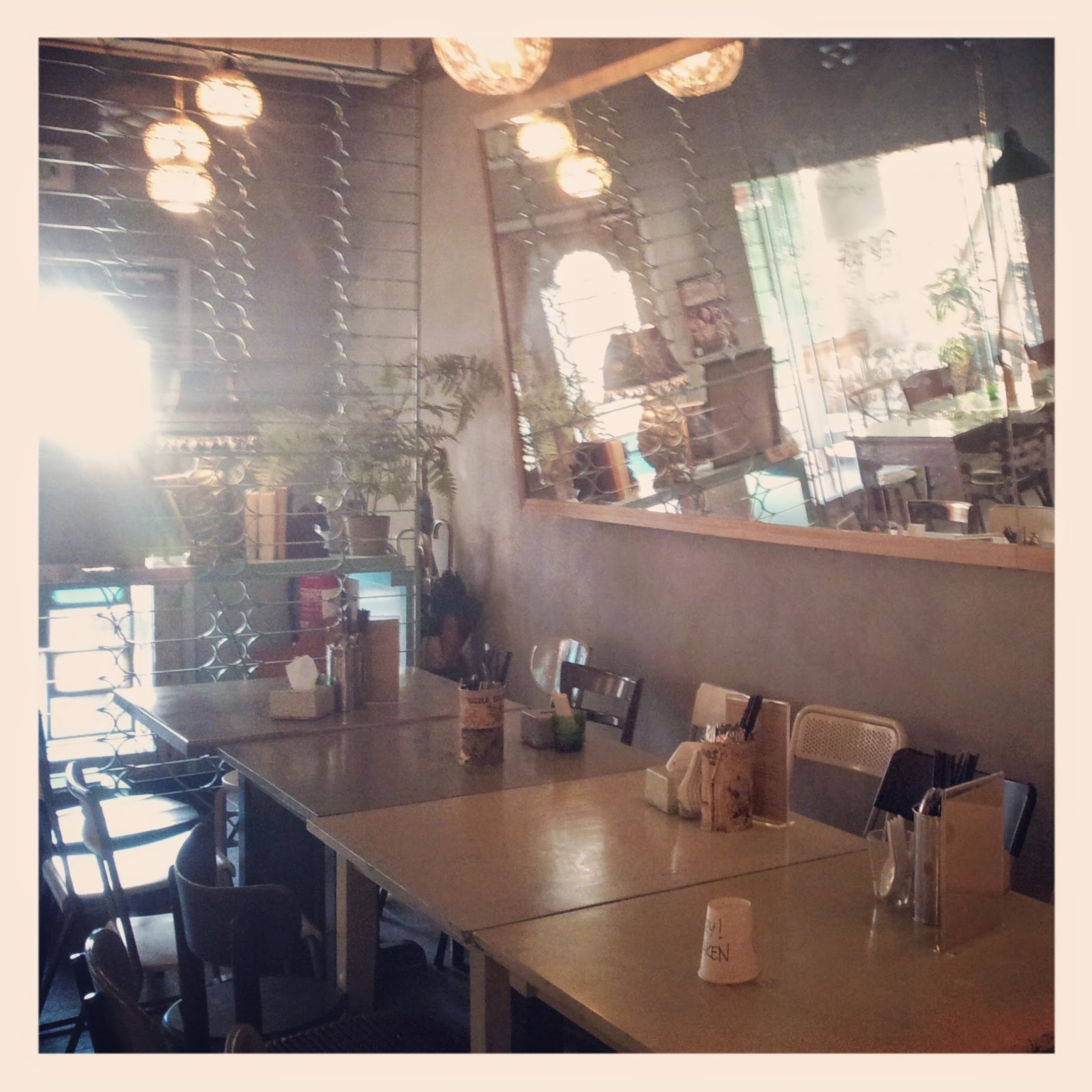 Fairy Godma knows me well enough to pick a place that has a lot of cool photographic opportunities. Fat Spoon is a small, Nonya fusion eatery tucked within rows of shop houses. The whole place was just screaming "snap me!" and I happily obliged while Fairy Godma kept Bubs entertained ;) 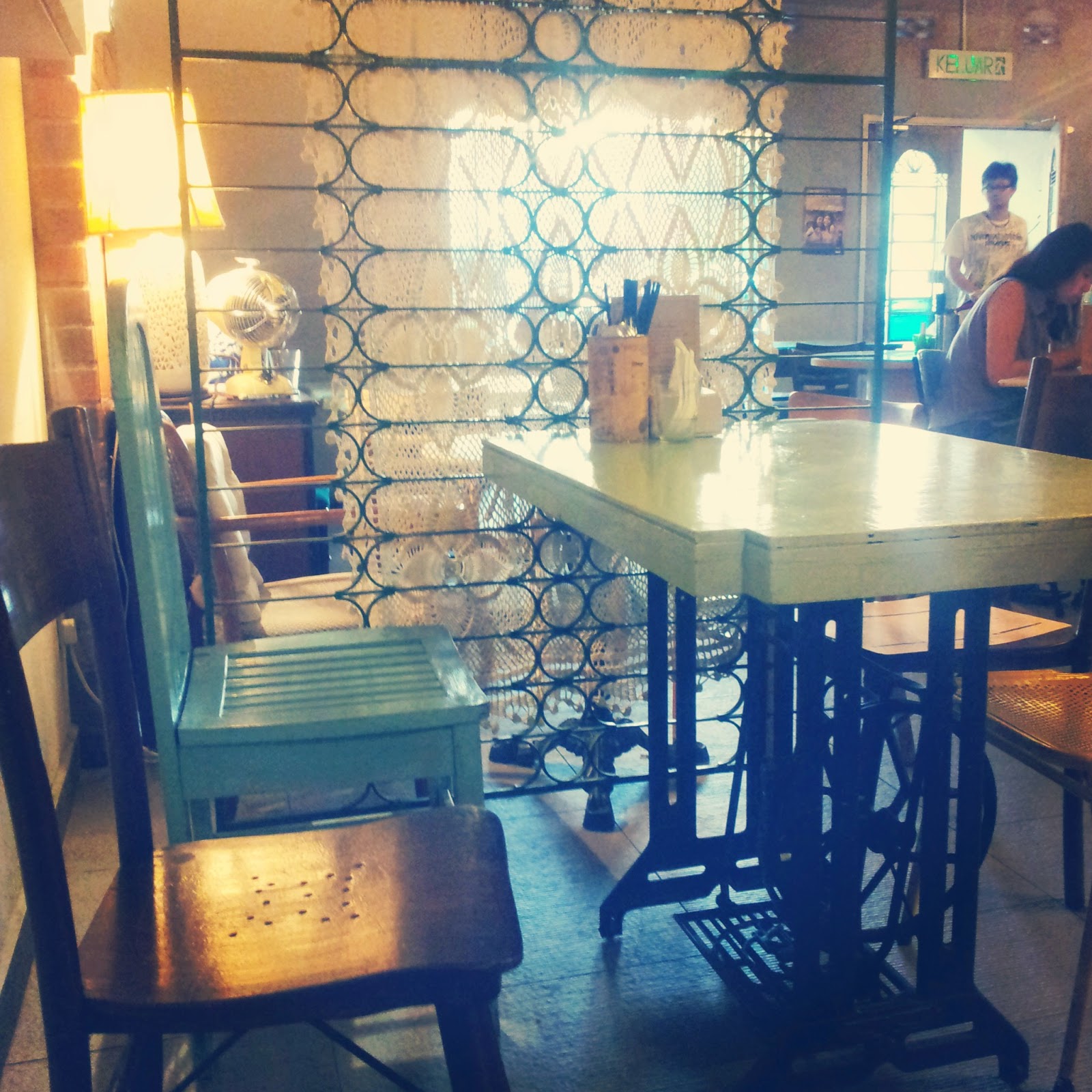 Remember those old Singer sewing machines that Grandma used to sew on? The crafty owners turned this one into a table. 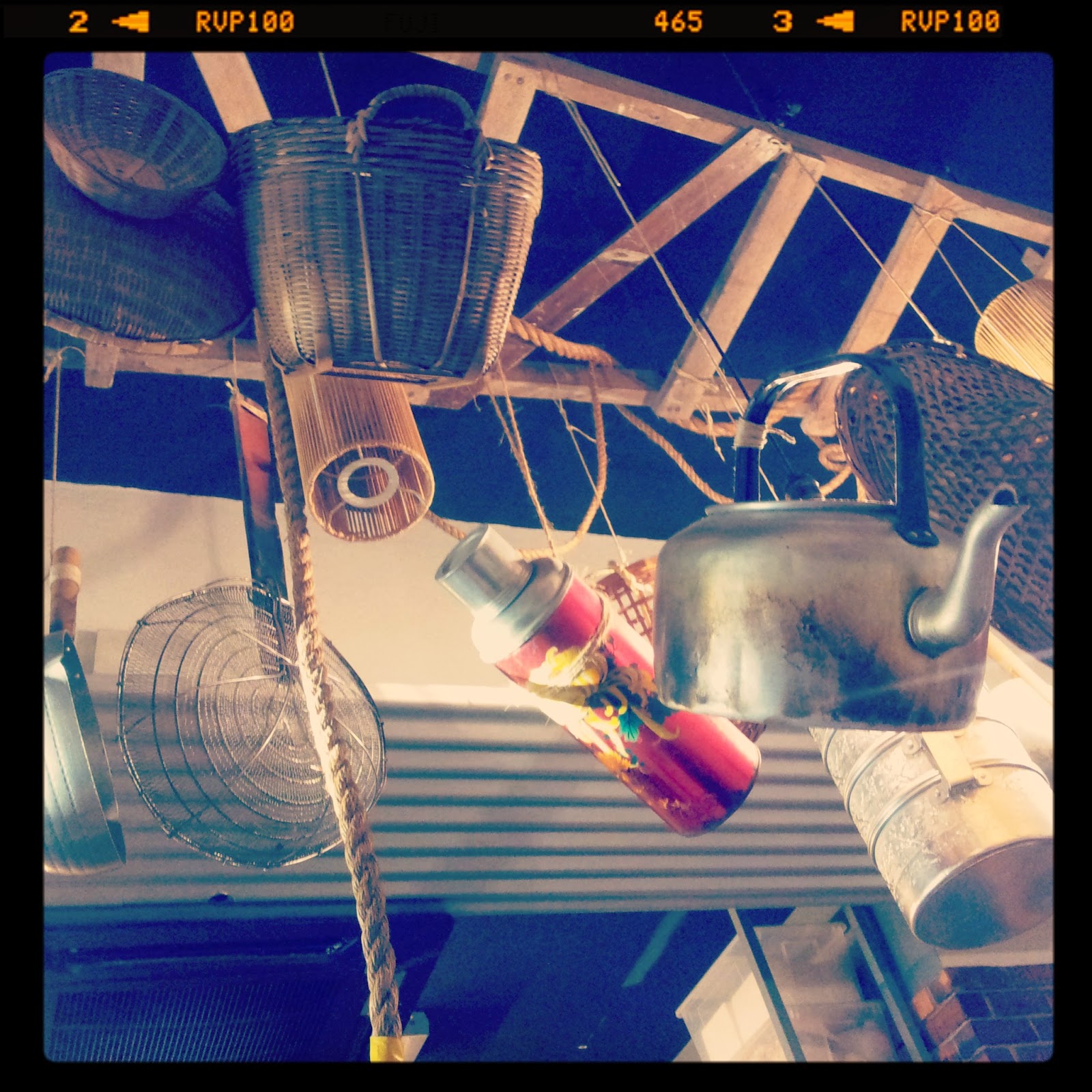 From where we were seated, I looked up and saw an array of old school kitchen accessories tied (very firmly, I hope) to a ladder which then dangled down from the ceiling. 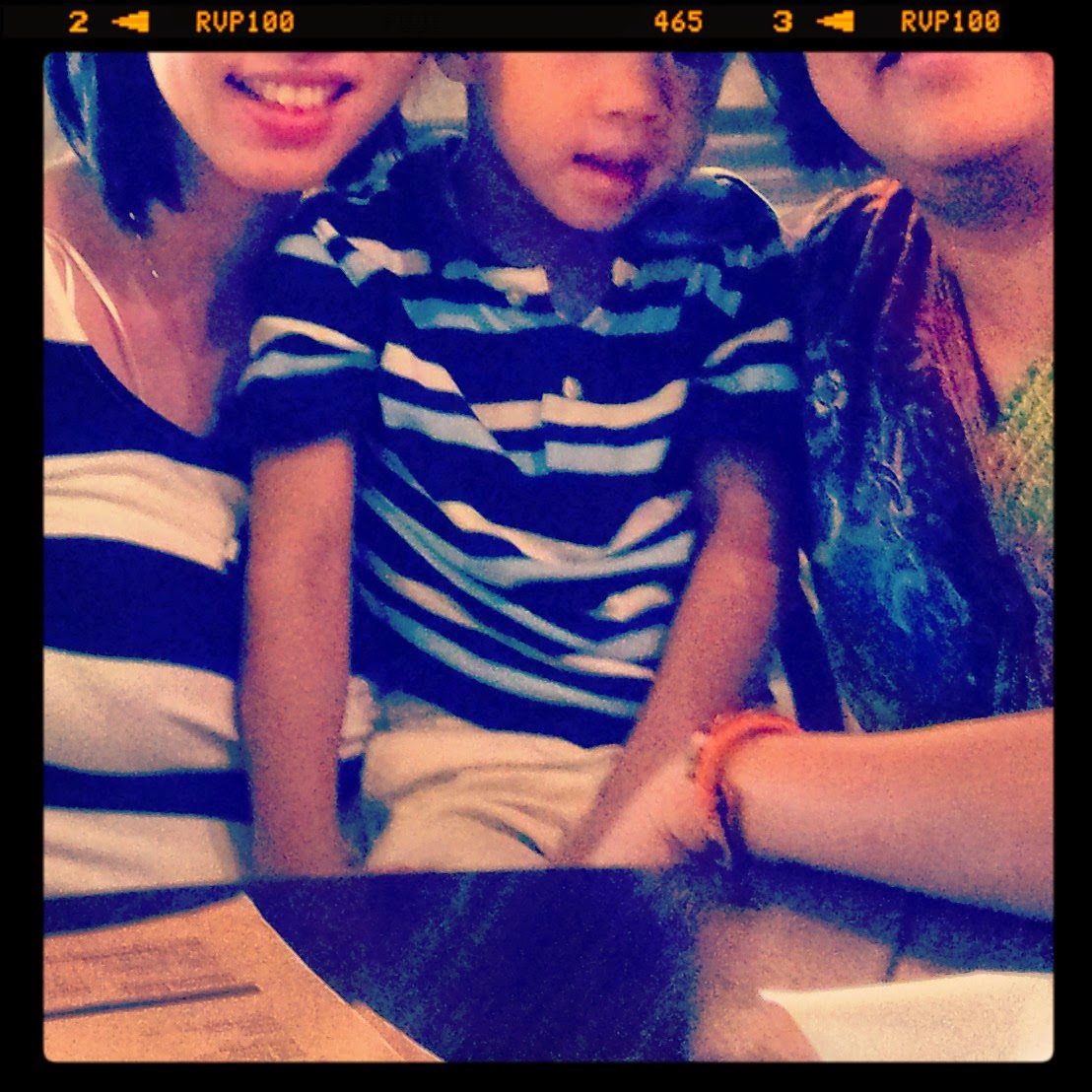 Literally squeezing in one more shot with Fairy Godma before food is served. 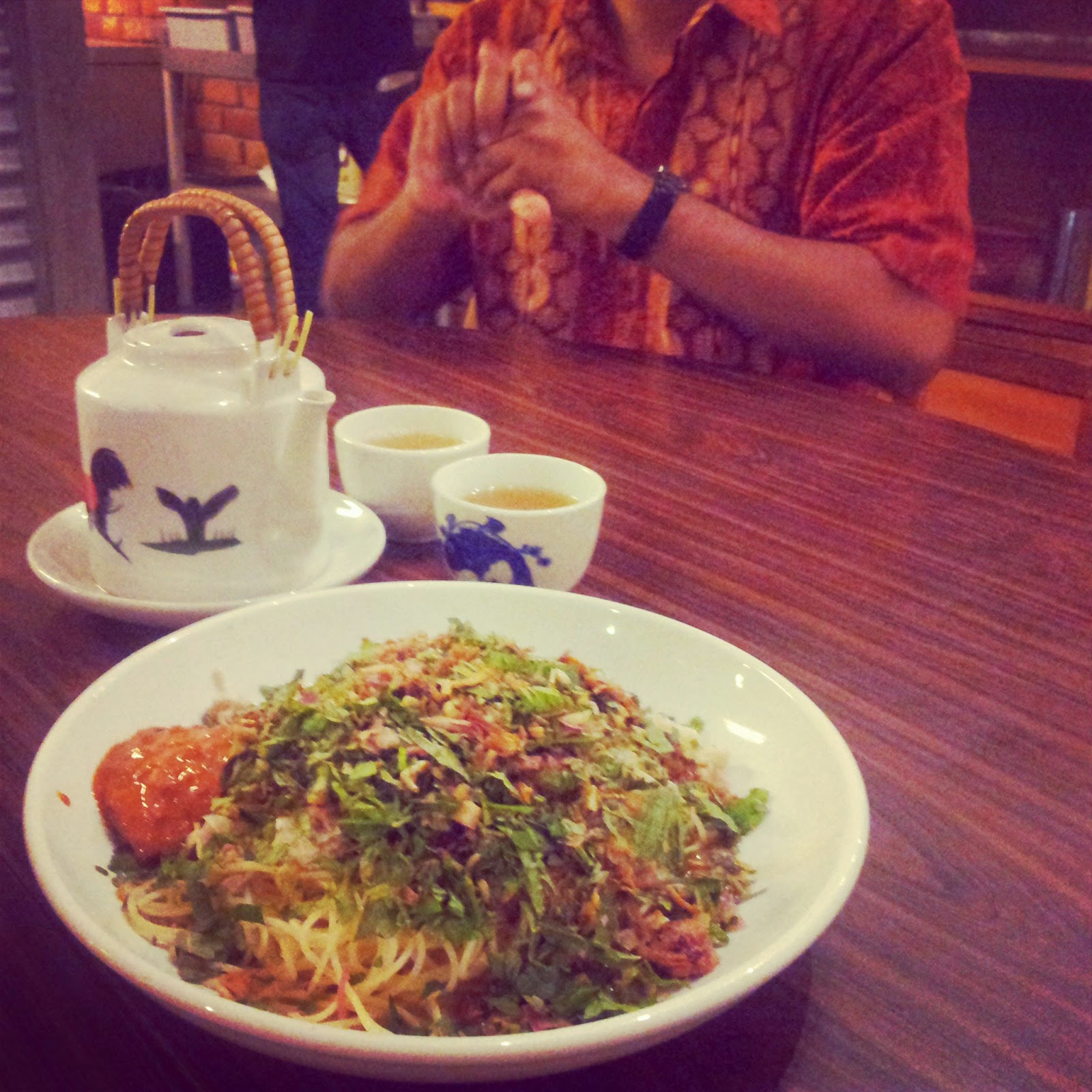 The ulam angel hair pasta and lemongrass tea were the first to be served. I'm a huge fan of nasi ulam so I was interested to see how Fat Spoon's fusion version with angel hair pasta would fare. The herbs were very fresh and the pasta added a depth to this dish as compared to the traditional bee hoon. It was a pretty huge plate and I was unable to finish this. 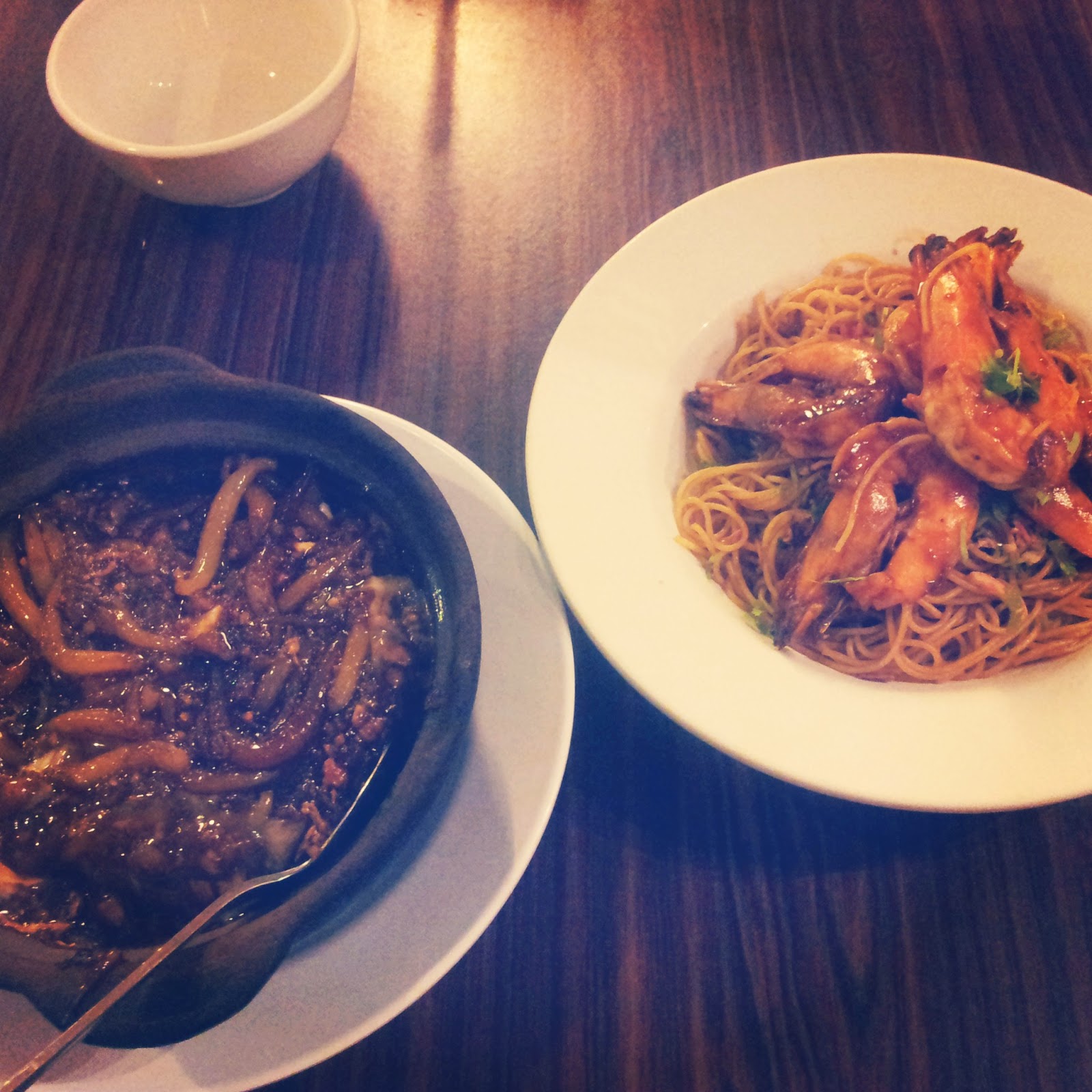 Hubs had the loh shee fun (claypot noodles) and Fairy Godma had the tamarind prawn pasta. As Hubs was sharing his noodles with Bubs, we requested the egg to be fully cooked but it was still served semi raw so we had to remove it to avoid Bubs from getting a bellyache. Bubs eyed the thick, dark hue of the noodles suspiciously and asked what were there? I told him those were mice tails ;) When he still looked doubtful, I started singing Three Blind Mice for him, LOL. 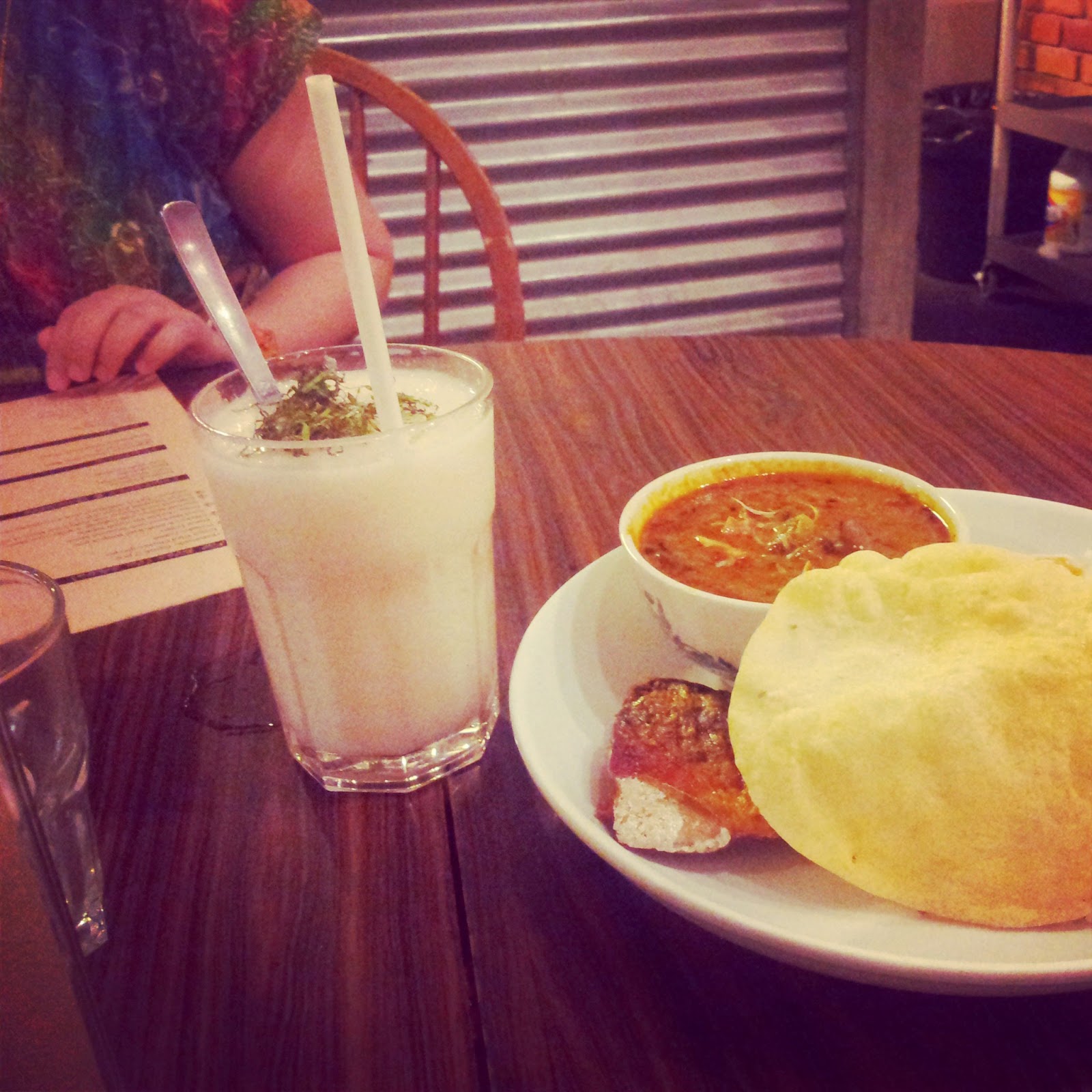 Fairy Godma's friend had the perut ikan rice which she kept trying to convince me to try  but I was adamant that nothing would come close to my Mum's perut ikan so I skipped it. My lychee blast is in the background and this is a must order. I loved how it was tinged with the rose sweet scent of lychees, cold and frosty and I couldn't stop sipping on it. 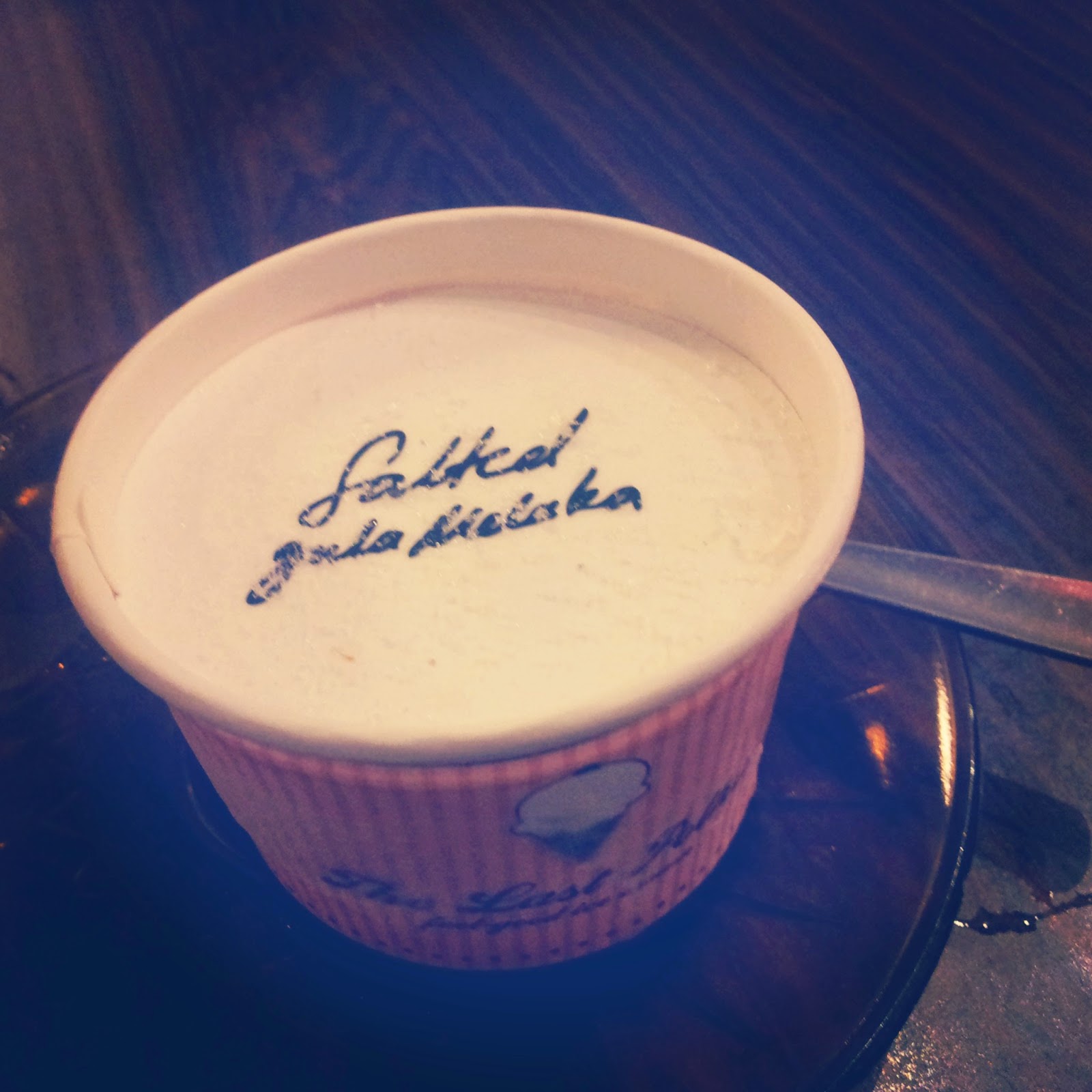 Having heard so many good things about the Last Polka's ice cream, I was really excited to finally be able to try it at Fat Spoon. People, the hype is true - run, don't walk. The salted gula melaka ice cream was a delight on the palate; smooth and unadulterated - Fairy Godma had to lure Bubs away so Hubs and I could fight each other for every single bite of this. 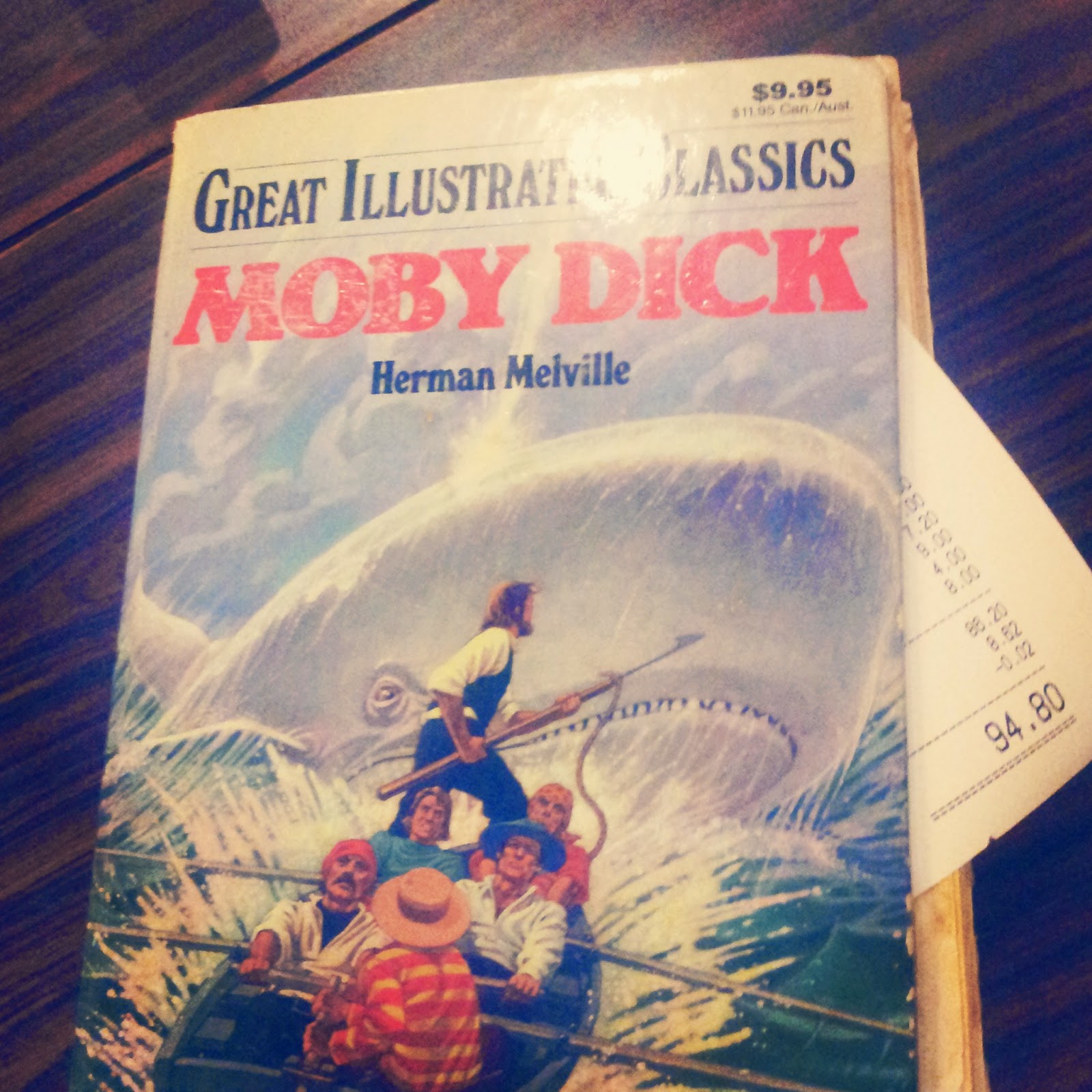 Another plus point - the bill was presented in a hard cover old school book ;) 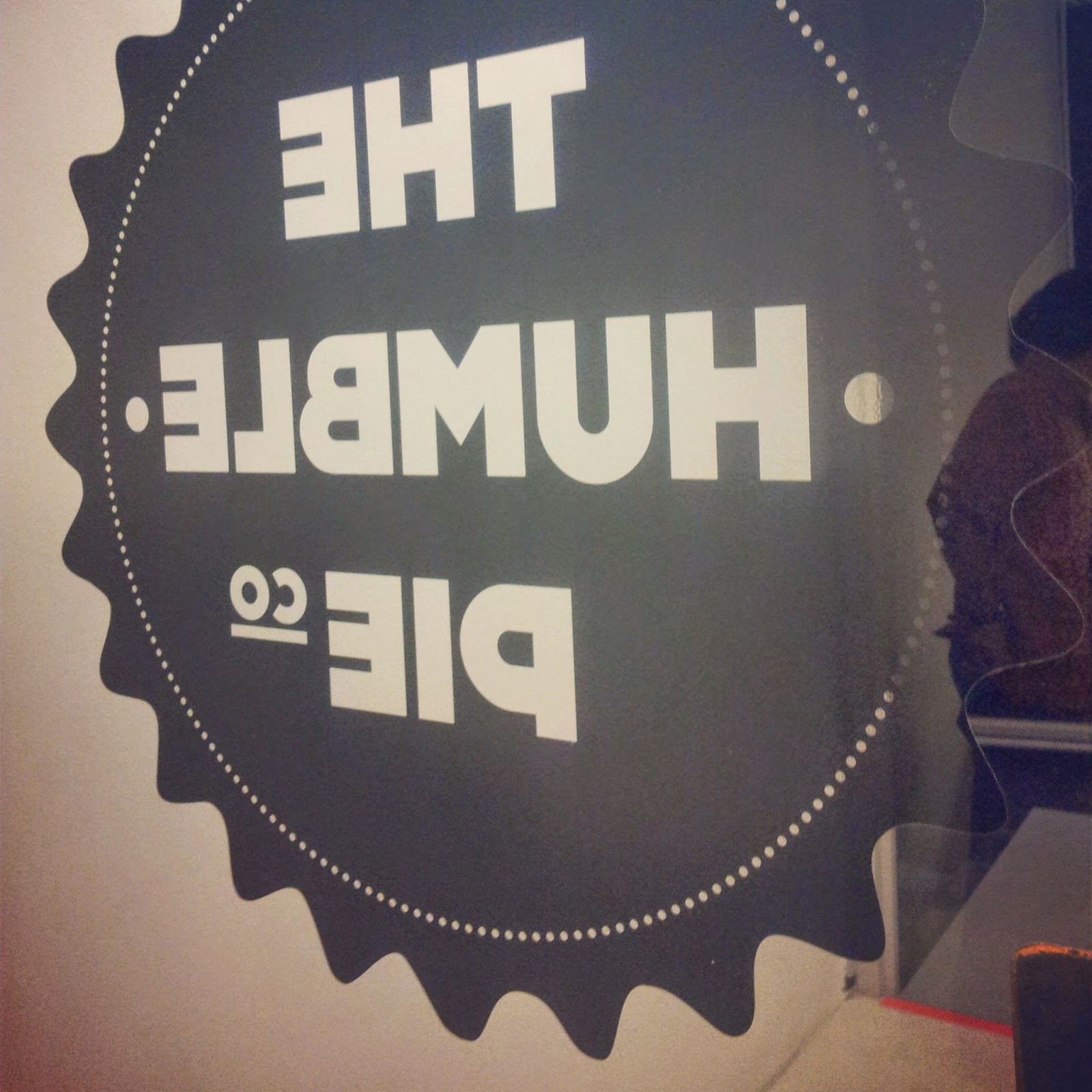 Fairy Godma decided that as the night was still young, she had to bring us to another dessert spot and I'm so glad she did. The Humble Pie Co. is a relatively new cafe specialising in all things sweet and by the thing we reached, it was packed full of people. 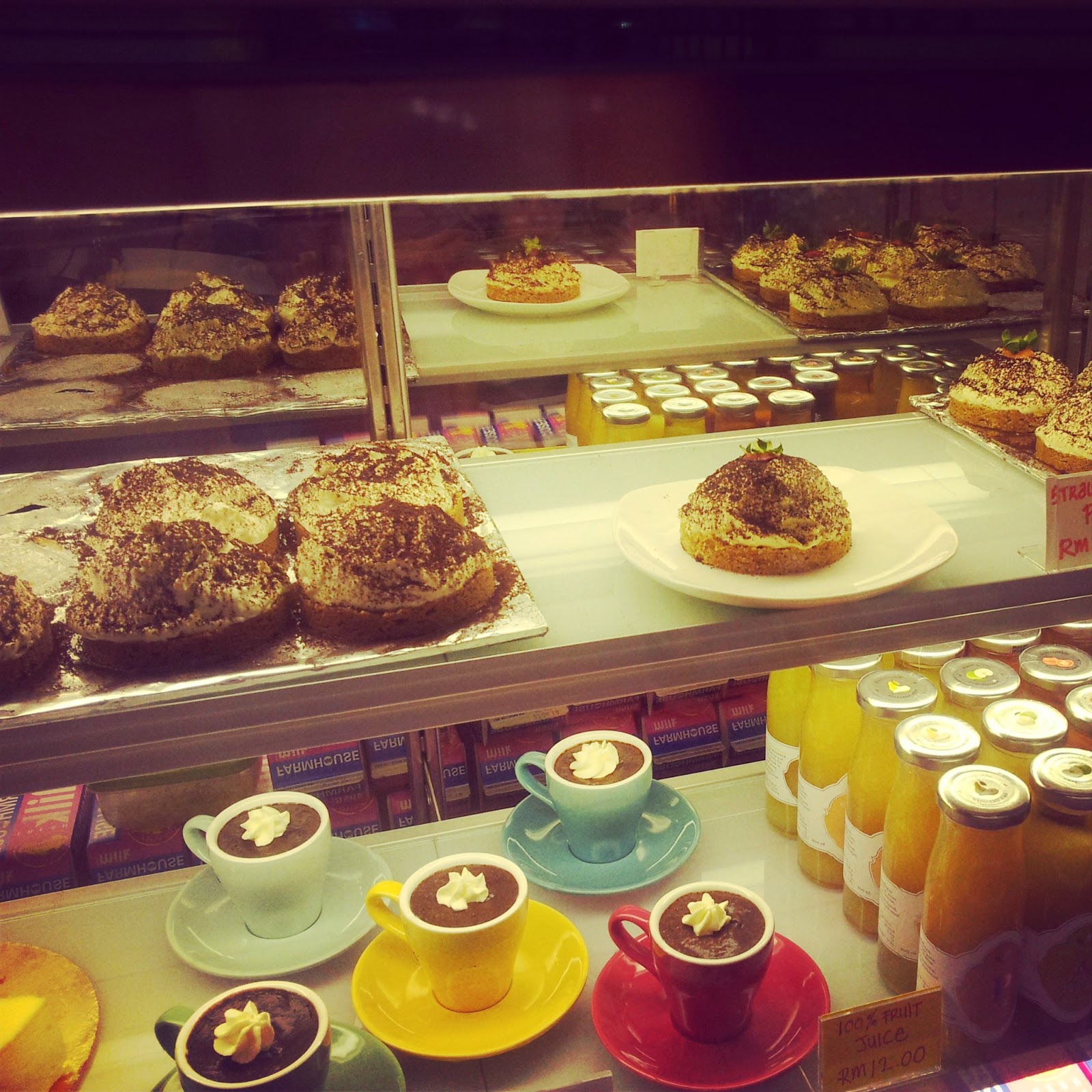 The shelf chockful of enticing desserts beckoned us not to leave without trying one ... or two ... or heck, the more the merrier :D Their signature dish is the banoffee (banana toffee) pie but they had something even better that night - the duffee (yes, you read that right - durian toffee) pie. 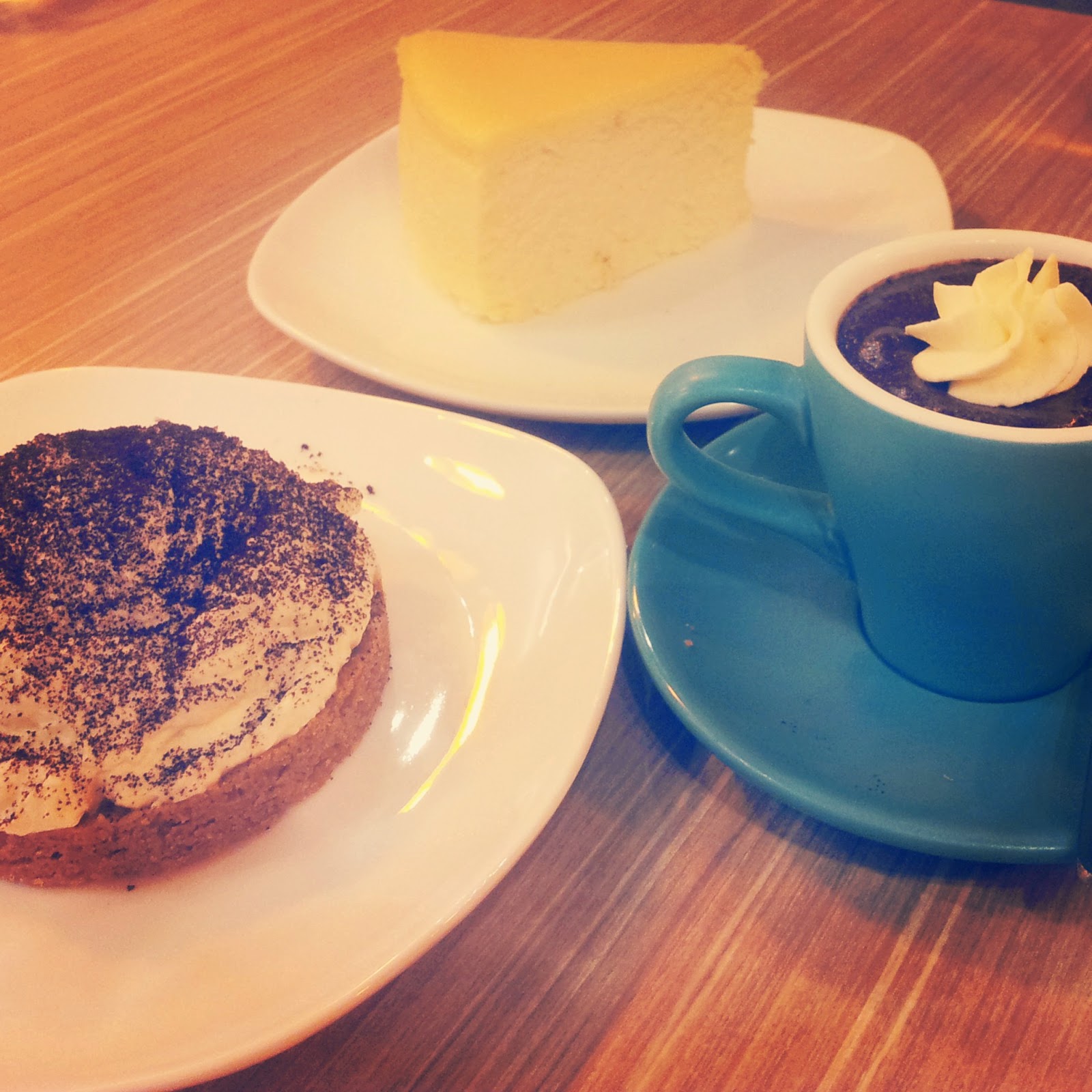 Our delectable choices for the night: the duffee, the cheesecake and the chocolate mousse. The duffee was easily the best with its strong, durian taste complemented by the buttery, crumbly base. Just looking at the photo is making me long for it again. Fairy Godma, hint, hint please? The cheesecake is perfect for people that love the velvety soft texture of the cake without the biscuit base. Simplicity at its best, no? For a tiny little teacup, the chocolate mousse was superbly rich and very satisfying.