The Diary of Bubs


I've been keeping a One Line a Day journal for a little over 2 years now. Bubs is extremely fascinated with watching me scribble lines into it and regularly asks me to read out excerpts. He has been so inspired that he started his own diary. Hubs took a peek at the contents and said I sound like the perfect fairy tale evil stepmother ...

In KL, we did so many Bubs-centric stuff! He had fun with other little kids, had ice creams and cake everyday, shopped for toys and books, played at the park with Godma ... and this is what he summarised from the trip, complete with a sad face?! 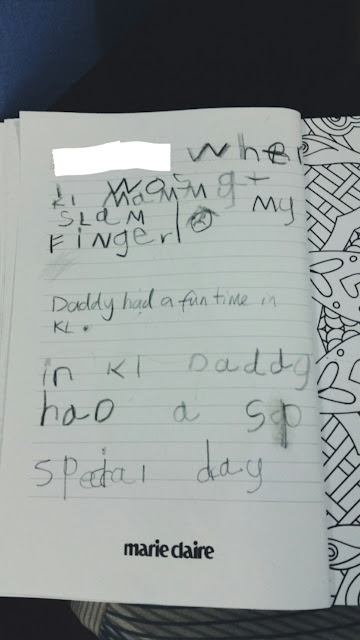 In my defense, we were at a basement car park and you hear all those creepy stories of KL car parks and I was trying to get all of us safely into the car when I didn't realise that his little finger was still at the side and I shut the door :( Poor Bubs was sobbing so hard and when I kept apologising, he choked out "It's ok, Mummy, it was an accident," between his cries. *guilt-ed out to the max* 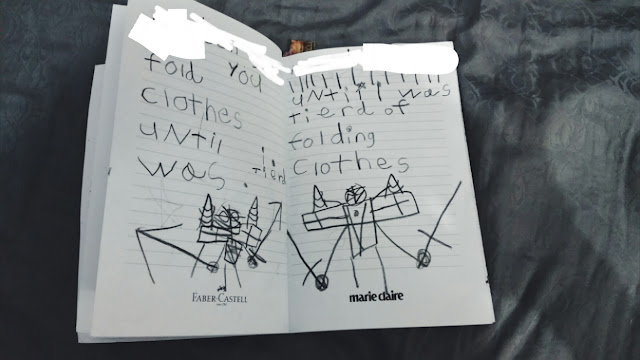 This entry was about his house chores. Apart from tidying up his toys and books, he's now tasked with folding the clean clothes for the entire family. Bubs does a very neat job (Hubs pointed that even his folding is much nicer than mine!) but it's not a chore he looks forward to. He often whines, sleeps on the pile of clothes, hides his face under a T-shirt so no one will look for him ;)
Posted by The Nonya at 1:15 PM