We usually stick to our KL food routine choices but this time around, our friends got us to try out  some places that we'd never been to before.

KL Godma took us to Tang Pin Kitchen at SS2, Petaling Jaya as it's a usual breakfast haunt of hers and R's. It's a very simple, no frills, style of dining, though thankfully, air conditioned and no smoking allowed. 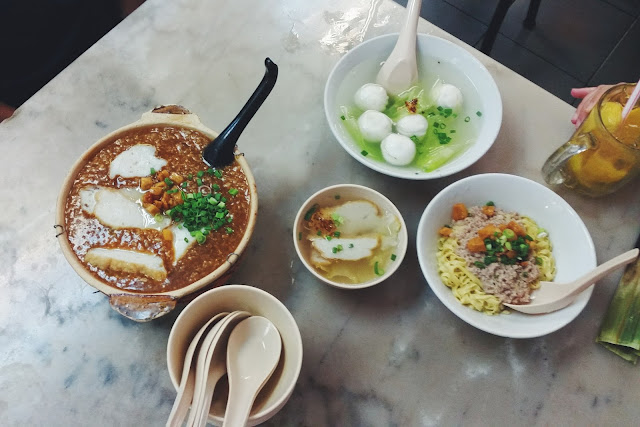 She ordered up a storm of their specialties: fried porridge (don't get me started on that), homemade fishball soup and mee pok. Hubs really enjoyed the spread as he's a Teochew boy and loves simple flavours. Fried porridge, seems a bit of an oxymoron to me - do you fry the rice then cook it into a porridge? Or do you attempt to heat up oil in a burning hot wok then dump gluggy rice porridge in? I'd no idea but this dish was certainly unique, garnished with generous servings of fish cakes. The homemade fish balls and mee pok reminded me of pan mee which although I like, I find the flavours a little too bland for my Nonya palate. 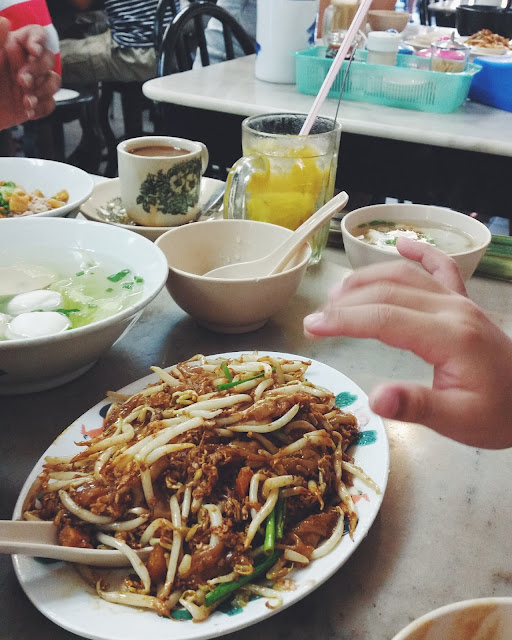 KL Godma conned me into ordering a plate of what I thought was char koay kak. Liar, liar, pants on fire - it was most definitely not char koay kak or even char koay teow. These were flat, soft noodles fried with oodles of crisp beansprouts, egg and fresh spring onions. I thought it was pleasant but ... I'm sorry, you can bring the Nonya out of Penang but you can never con her into eating char koay teow substitutes! 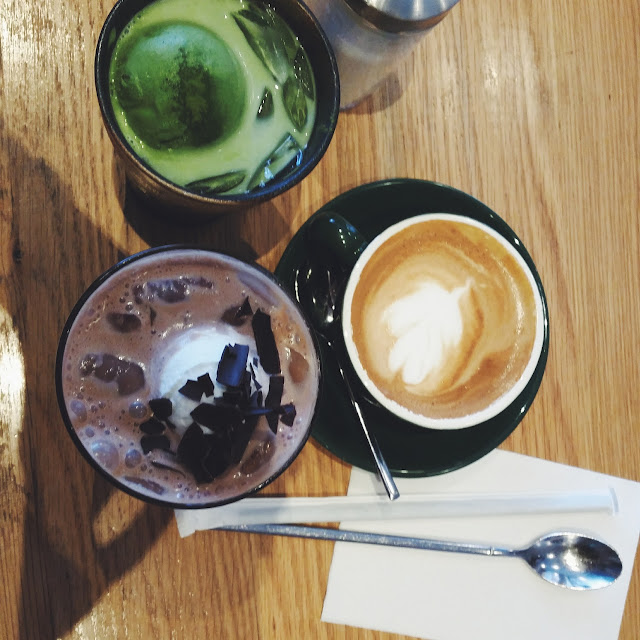 We met up with D, my primary school bestie, at Franco, 1 Utama, to celebrate her birthday. It struck me as deja vu when we stepped in the crowded cafe. It had the same vibe as Miam Miam, even the menu offerings were similar: Japanese-French fusion. Only after checking, it turned out that Miam Miam (at least in KL) has re-branded itself to Franco. The green tea softie iced latte never lets me down. 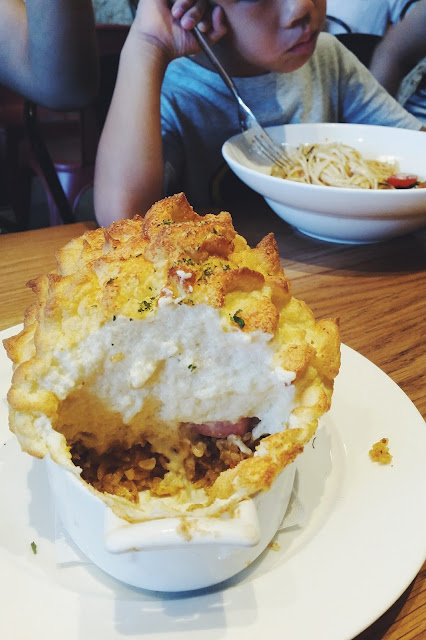 Hubs and I had the souffle baked rice, the very impressive topping was soft and springy and the baked rice underneath was nice, comfort food. Don't let Bub's look of boredom put you off the tobiko carbonara spaghetti, it was yummy and I regretted not taking the waiter's advice to add salmon belly slices to it. 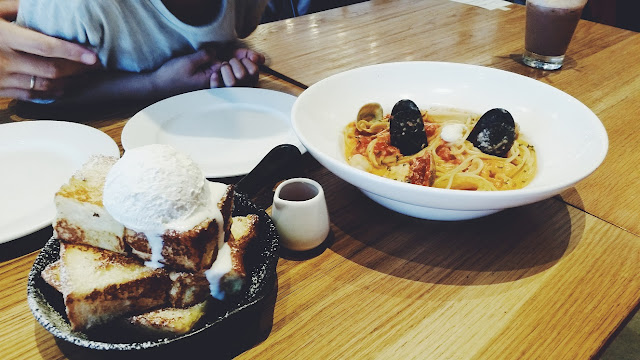 This was D's meal, needless to say all the kids loved the French toast which was as fluffy as pillows. 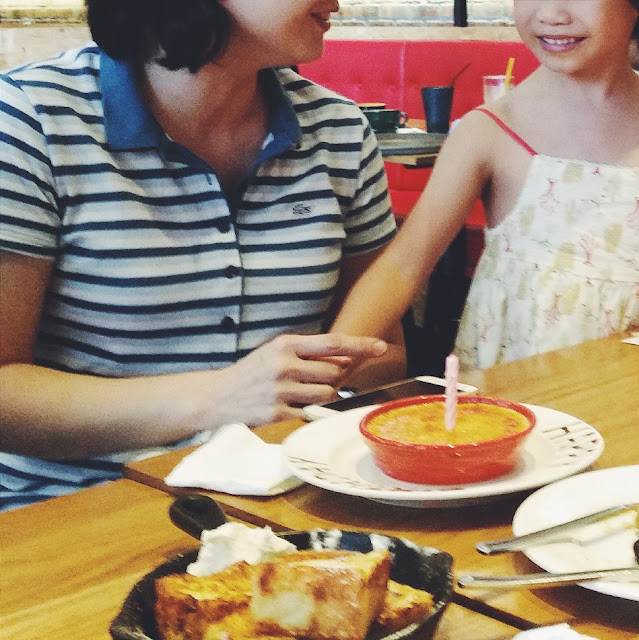 The waiters at Franco were sporting and obliged to my request to sing Happy Birthday (very LOUDLY - I added helpfully) and took it a up notch higher by playing the birthday song over the speakers. D literally froze while all the kids were clapping along in delight :D 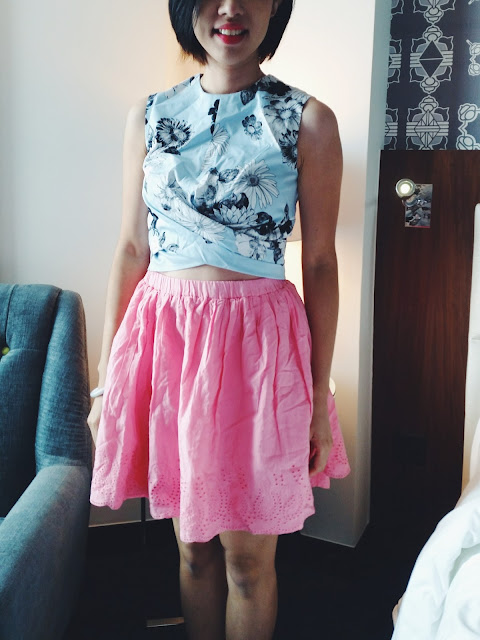 Wearing somewhat crumped clothes just before heading out for dinner. 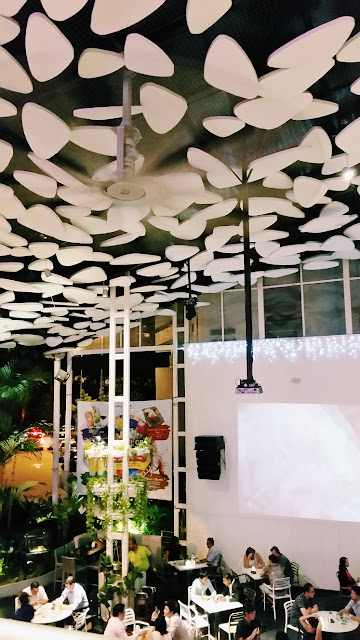 After a long day of intense meetings, my colleague took us to Souled Out at Hartamas. We were all smitten by the place as it had a nice vibe to it. Food and drinks were decently priced plus you get a wide variety of Asian food (great when you've international guests visiting): think fried calamari, tofu puffs, tom yum, pastas. No wonder the place was jam packed even on a weekday. 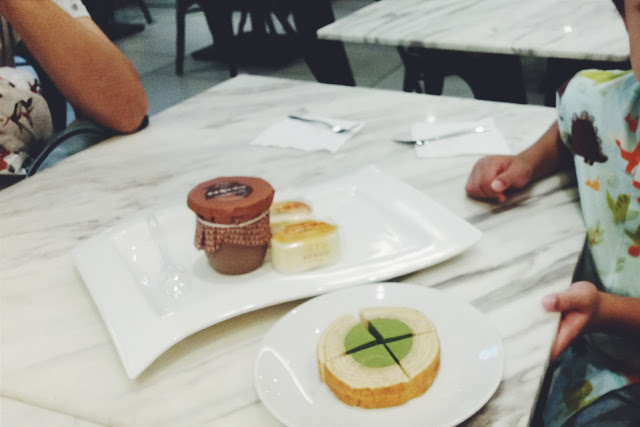 We can never say no to Komugi cheesecakes in KL. Bubs insisted on adding the chocolate pudding and it was such a fantastic choice, all chocolaty and decadent. The green tea Swiss - or should I say Japanese - roll was pleasant but not particularly stellar. 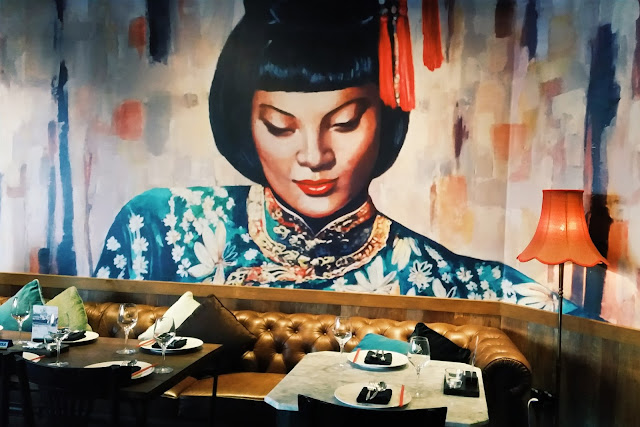 Mama San at KLCC was founded by chef Will Meyrick, “Top Chef” Indonesia and proved to be a feast for the senses. From the smouldering gaze of its signature wall mural to the attentive service and a menu that is a melting pot of South East Asian cuisines, you will be wow-ed the moment you step into its chic, dark timbered interior. 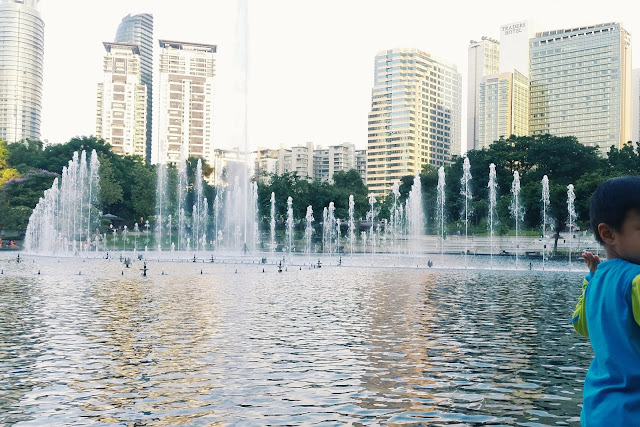 Mama San is located just next to the KLCC fountains so Bubs and I made full use of the food waiting time to dash out for a bit. 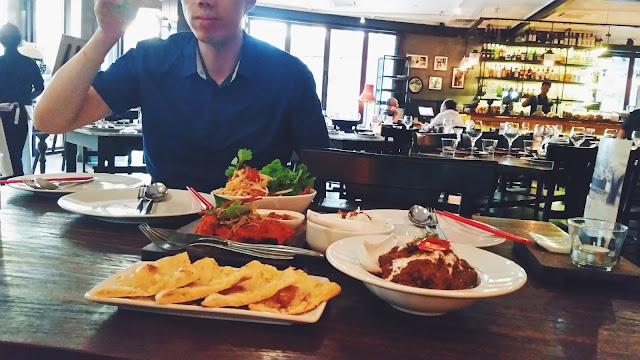 We found the food to be pricey (RM8 for white rice and RM15 for Coke!), though it's to be expected given the luxe, retro ambience and prime location. The beef rendang was so tender that it almost melted in our mouths. The waitress recommended a deep fried chicken with mango salad for Bubs as it wasn't spicy and he enjoyed it with the garlic naan.
Posted by The Nonya at 1:39 PM