For our 7th wedding anniversary last weekend, I'd made dinner reservations at an eatery that we've been wanting to try for a while.

It started out quite innocuously. In the afternoon, Bubs complained that the back of his neck was sore. Hubs placed the back of his hand against Bub's forehead and noticed it felt warm so I took his temperature which was raised. We gave him some Panadol, mopped his forehead with wet towels and made him take an early afternoon nap.

When he woke up, he seemed fine so we stayed in bed, watching cartoons.

After a while, he said in a tiny voice, "Mummy, I feel cold." This time, his neck, his tummy and his ankles were hurting. His temperature was also spiking so I called the pharmacist to ask if it's ok to give another dose of Panadol after just 4 hours (Yes it is, if the child is feeling discomfort).

Hubs and I were deliberating between going straight to Emergency or wait a couple more hours for the hospital's night clinic to open when Bubs suddenly burst into tears, wailing that it was painful "everywhere". We rushed all the way down town to the hospital's emergency with a tearful Bubs screaming. His little body was still flushed with fever.

The ER nurse handed me a basin filled with warm water and a towel, told us to strip him and sponge him down all over again.

This is the crazy part that Hubs and I still look back in disbelief.

Bub's temperature dropped, his crying ceased and he was back to normal. There we were, all 3 of us sitting on the narrow ER single bed and Bubs was laughing and talking at the top of his voice.

The ER nurse must have thought that we were all nutcases. She discharged us and told us to see the pediatrician at the night clinic just to rule out anything serious.

So instead of a swanky dinner, we'd buns from the hospital's bakery. Not that Bubs minded, his appetite returned as he chomped down on his kaya bun with gusto. 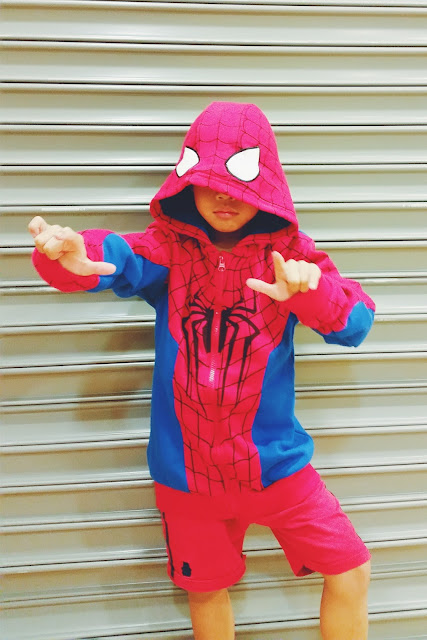 I didn't know to laugh or cry given that Bubs was now full of beans.

Hubs looked at me, "did we just hallucinate all that?"
Posted by The Nonya at 10:35 AM